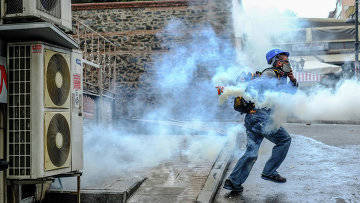 Journalist Yigit Bulut, extraordinarily evaluating the events around Gezi Park, believes that the coup in Egypt is part of a plan to destroy the Islamic world. According to Bulut, as a result of the coup, which resulted from the actions of Israel and the neocons to create a new design in the region, one of the pillars on which Islam was balanced was destroyed. Next in line is Turkey.


Noting that the July 3 coup was aimed at neutralizing the Islamic world, the journalist claims that the West deposed Mursi, wanting to prevent the domination of Muslims in the world. He also believes that while maintaining multi-vector pressure in Egypt, the Islamic revolution is inevitable.

Kubra Senmezyshyk: Recently, Deputy Prime Minister Beshir Atalay blamed external forces and the Jewish diaspora for fomenting unrest in Turkey. What is the basis of these events?

Yigit Bulut: This is just the beginning, we only saw the first wave. The global coalition and its constituent forces do not want to see in power in Turkey, the incoming 10 anniversary of his reign, Prime Minister Recep Erdogan. Unfortunately, this coalition includes an opposition party, a percentage lobby, Ergenekon and a kind of financial Ergenekon.

- To what extent is the Republican People’s Party (RNP) connected with the events?

- It is necessary to consider this batch in relation to its stories. Jellal Bayar and Ismet Inonu began to actively influence Atatürk’s policy in the 10 year of his reign. After 1933, the financial structures of the RNP were in the center of the banking system, thanks to bank loans they managed to create their own quickly enriched bourgeois stratum, which together with the RNP participated in a number of anti-government actions.
Speeches by supporters of Mohammed Mursi in Cairo

- The coup in 1960 was carried out by the regime built into the state structure in cooperation with the global coalition and the assistance of the armed forces. The RPP is not just a party, but a kind of offshoot of the “deep state”. Whoever was involved in the activity they did not want, they blocked them. Atatürk, Menderes, Ozal are virtually eliminated on the 10 year of his reign.

- After the 10 anniversary expires, the power of the political leader begins to grow stronger, and at the same time the interests of the people are better protected. This situation is a concern for the built-in mode. Pay attention to these businessmen who flaunt the words “I am a marauder” (as Prime Minister Erdogan called the protesters in Istanbul): over the past four years, their shares worth 30 millions have reached 500.

“You claim that the events underlying the protests in Gezi are an attempted coup, but fortunately, today this process has come to an end.” Game over?

- The first wave is completed. We could not prevent the February 28 coup, but now we are familiar with the methods of these people. Judging by the latest events, they, having left the cover, chose Erdogan directly as a target. This shows that they are in a difficult situation. The built-in mode they created collapses. In desperation, divulging their names, they take to the streets.

- Creative circles fearlessly expressed their thoughts. What did they rely on?

- These circles were given guarantees important figures in Germany and the UK. The owner of the built-in mode in Turkish media today is Germany. Merkel and Doğan Holding act together. Behind the "assembly production" is the UK. And it was said: "We will overthrow this man, do not be afraid, we stand behind you, go to the end." Having received such guarantees, people took to the streets without hiding their faces.

- The Islamic Union stood on two legs: Turkey and Egypt. One of the basics collapsed. This is in the best interest of Israel. Among the Muslim countries remained Turkey, in which Islam is properly represented. Therefore, the next goal is Turkey.

- Why does the West demonstrate a two-faced position on the issue of democracy?
American soldier searches Iraqi woman

- The West can not allow the dominance of a Muslim state. In the period when Turkey carries the banner of Islam, we intended to put one leg of a compass on Turkey, another - on Egypt. Thanks to this, the entire Middle East would be in our sphere of influence. However, today the right leg of the compass is broken.

- What will happen next?

- What happened to the 52% of the Egyptians? Have they sunk into oblivion? No, they still insist on their position, and if pressure increases in Egypt, in the end, an Islamic revolution will occur. But, if to force events continue the West, the result will be completely different.

- What awaits Turkey in this process?

- Provocative manipulations in Turkey will continue until the elections, that is, about two years. The objectives are as follows: to overthrow Recep Erdogan, get rid of the Justice and Development Party, create a system at its own discretion.

- What kind of consequences can be brought about by the restoration of Egypt led by a Christian secular leader?

- In Egypt, the only democratically elected Muslim leader was Mursi. If we turn to the history of Egypt, then this is a country that has always been under external control - the Roman, Ottoman Empire and, as a result, the Arabs. In my opinion, the people will compensate for this in the long term. If, a year later, the Muslim Brotherhood is allowed to participate in the elections, they may again be in power and gain even more votes. The arrow fell off the bowstring, and Egypt will return to its essence.

- The statement of Saudi Arabia was surprising, what fears exist there?

Ctrl Enter
Noticed oshЫbku Highlight text and press. Ctrl + Enter
We are
Why overthrown Mursi, or the collapse of a failed jihadistGeopolitical mosaic: Turkish authorities decide that Jews are to blame for everything, while Russians will ensure order in America
Military Reviewin Yandex News
Military Reviewin Google News
96 comments
Information
Dear reader, to leave comments on the publication, you must to register.