17 July marks 95 years since the murder of the Romanovs 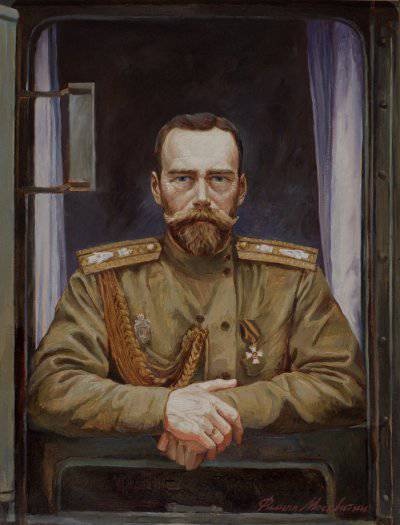 It is more and more habitual that the Russian people are preparing for the day of special commemoration of the holy Royal Martyrs. It could not be otherwise - they gave themselves in the name of saving Russia. The time comes to germinate in the soul of the people the grain that the royal sacrifice has become. It’s great happiness to know that after dozens of years of lies, slander and oblivion in thousands of churches in countless numbers of houses on this day, July 17, a grateful prayer is going on, bright in its sadness.


But how we all feel - besides sadness, there is a taste of Easter joy. Still shy. Like those who, doubting, stood in the tomb of the Lord, where He was no longer crucified. But the angels announced: The one you are looking for is not here. Obeying our ordinary ideas, and we, like the disciples of the Savior, are now “looking for” our holy Tsar Nicholas and his Royal Family. But is he where we look for him?

It is impossible to overestimate the importance and necessity of the processions, prayers, memorial meetings and outward manifestations of love, in particular, placing the sincere words “Forgive us, Sovereign” where many could see them.

But are our actions enough? And is there a danger of leaving the outside of the case? From here, as you know, is only one step to Pharisaism, when they honor with their lips, but their hearts are far away. This was precisely the attempt to say in the previous article “Tsar's business”. However, it was said, apparently, it was unnecessarily harsh and, judging by the comments, it embarrassed some readers. May they forgive the author, and in his thoughts he did not question the righteousness and necessity of the ministry now being done.

But, as the Lord says, one must do the same and not leave the other behind. Please, brothers and sisters, ponder the following. Would you like the Royal Martyrs so that the places of their commemoration bear such names as Ganina Yama or the logging of the Pigs, which is obsessively “pushed” now by the Piglets?

The place of royal Golgotha, as we all know, is in Yekaterinburg, where the Temple-on-the-Blood was erected. There, as it should, we are going to bring a prayer. Our desire to visit that mournful suburb, where the fanatics in haste dealt with the honest remains of the holy martyrs, is also explicable.

But shouldn't we think about renaming? Not only is everything still happening in the so-called Sverdlovsk region. It is named after the villain, who played, as it is more and more obvious, one of the most key (if not the most key) roles in regicide. The word "pit" has the most ancient origin and in translation from Sanskrit means hellish region. Is it not necessary to achieve for the whole region and for the area of ​​abandoned mines, established by investigator Sokolov, as the place of a possible finding of the relics of martyrs, before making processions, a new, proper name?

And can not our indifference in this matter be an alarming sign of the not quite right realization of which activity most closely corresponds to the feat of the royal martyrs?

It is necessary to resist being drawn into Pharisee worship. The very thing that Christ said: you are building the tombs of the prophets and saints, who were beaten by your ancestors, than you testify even more against yourself. It is not by chance that names are mentioned here, because much begins with the correction of names. Indeed, in the very persistence with which the authorities refuse to rename the same Sverdlovsk region or to remove from the map of Moscow the mention of another participant in the Yekaterinburg villainy (Voikov) contains a direct indication.

The present country is too far from the Russia for which our great newly-born Tsar Nikolai made his great sacrifice. Amid total decay, betrayed daily and hourly by dignitaries, ministers, entourage, generals, the Tsar was alone in the battle for Orthodoxy, Autocracy and the People. He worked tirelessly to strengthen the Orthodox faith, despite all the slander and mockery of the "enlightened intelligentsia". Created conditions for unprecedented economic and demographic growth. Provided breaking sabotage and theft necessary army. He led it and led to victory in world war, to the possession of Constantinople and access to the Holy Land.

And for all this was mean betrayed. Weak, stupid and short-sighted grandee-conspirators were not able to resist the elements held by the Sovereign. And after even more vile and evil usurpers, the Bolsheviks established their dictator, the country with a blunt indifference took the news of regicide.

The emperor rejected the path of tyranny. An attempt to force the throne to serve with violence and repression. Turn subjects into slaves.

The emperor wanted a truly Christian, free, prosperous Russia. That is his testament.

Today, our task is to get out of the stupor and begin a coherent activity to embody the royal desire. Only this will become a true repentance, an excuse for indifferent estrangement, which our ancestors of 95 fell into due to their own and no fault of their own.

May our processions and penitential prayers be accepted. But faith without works is dead. The visible manifestations of penitential piety will not lead us into a new detachment, into the beauty of imaginary repentance. But may they be the guarantee of a nationwide movement for the acquisition of the Russia that the Sovereign bequeathed to create.

Ctrl Enter
Noticed oshЫbku Highlight text and press. Ctrl + Enter
We are
The Day of the troops of radiobiological and chemical protection is dedicated toThe action “Military service under the contract is your choice!” In Rostov-on-Don: future contract servicemen, exhibitions and “Russian Knights”
Military Reviewin Yandex News
Military Reviewin Google News
481 comment
Information
Dear reader, to leave comments on the publication, you must to register.