Who raises the Far East 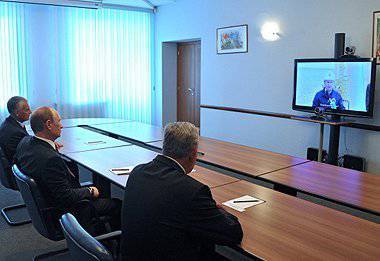 Rosneft is ready to invest in the development of Eastern Siberia and the Far East more than a trillion rubles.


Barely saying goodbye to the participants of the Baltic expedition "Gogland-2013", Russian President Vladimir Putin went on a working trip to the other end of Russia, to other seas - to Yuzhno-Sakhalinsk. In the Baltic, during the dive on an underwater vehicle to the sunken frigate “Oleg,” the head of state, by his own admission, was most struck by the quality of the work of the submariners, and on Sakhalin Putin again managed to communicate in detail with the real professionals who accomplished for the country big and difficult thing.

The communication took place in the form of a video conference with the Orlan drilling platform located in the Sea of ​​Okhotsk, on the Sakhalin shelf. The main interlocutors of Putin were the president of Rosneft, Igor Sechin, and the head of Exxon Mobil Development, Neil Duffin. Both had arrived in advance on the platform created by the hands of Russian and foreign specialists, and now they were reporting to the President about the success of the collaboration.

Rosneft: a trillion on development

Having familiarized Vladimir Putin in detail with the parameters of Orlan, a giant structure measuring 100 on 90 meters and weighing 70 thousand tons, providing work for twenty wells, Igor Sechin added that ten kilometers from Orlan a new platform is being built, but with a mass in 150 thousand tons, designed for drilling 46 wells. According to the head of Rosneft, it has no analogues in the world today.

According to Sechin, the development of the resource base of Rosneft in the region of Eastern Siberia and the Far East creates the possibility of developing new strategic projects on our Pacific coast. One of such projects is the construction of a liquefied natural gas plant on Sakhalin. Another growth direction is the creation of an Eastern petrochemical complex in Primorsky Krai with a capacity of up to 30 mln. Tons, which will reduce the risks of a shortage of petroleum products in the domestic market of the Far East.

According to the head of Rosneft, the implementation of such projects will lead to the development of related infrastructure in the regions. We are talking about the construction of ports, electric power facilities, roads and railways, the creation of related industries and tens of thousands of new jobs. And what is the prospect of the appearance in the Far East of a special large-tonnage shipbuilding, the need for which was proved both by the operational experience of the Orlan and the extreme demand for such equipment when developing the Russian shelf! Political will to create such fleet it has already been shown in the corresponding order of the president, which now, according to Sechin, needs to be "unconditionally executed."

All this is not empty searchlights. As the head of Rosneft said, already in 2013, the oil state company will invest in its own development programs in the Far East about 52 billion rubles, of which 27 billion will be spent on exploration and production of hydrocarbons, and 23 billion on their processing and modernization of Komsomolsk Refinery. In the next five years, Rosneft’s investments in Eastern Siberia and the Far East will, according to a conservative scenario, amount to a fantastic amount of more than one trillion (!) Rubles. For this, according to Sechin, only presidential support and stabilization of tariffs and tax regimes will be required.

In turn, Neil Duffin, head of Exxon Mobil Development, stressed that both drilling platforms in question were built by his company with Russian participation: our side designed and built the foundations of both platforms.

Government left "for the fall"

Wishing success to the interlocutors, the Russian president continued his working visit to Sakhalin, at the end of which he was awaited by a meeting on the social and economic development of the region, with the participation of key ministers of the federal government. At this meeting, there were much less rosy figures indicating a lack of state attention to the needs and concerns of the island. In particular, Putin mentioned the natural decline of the Sakhalin population, which was 1,6% only in the first 3 months of this year. Another example is the level of gasification of the island: it reaches only 10,1%, with the national average 60%.

What is the reason that the Far East can not realize its potential? No money? Wrong: budgets are available. Missing development programs? No, there are plenty of plans. Here they are only realized very badly. For example, it turned out that four fifths of all presidential assignments formulated at the State Council Presidium on the development of the Far East and Transbaikalia late last year were simply not implemented by the government. But all the orders were previously agreed with the ministries, it turns out that government officials could not even fulfill their own promises.

It could not satisfy the head of state. “I want to address you, dear friends: will you work or not? - Putin asked, turning to the ministers. - What is this? We have already met in some regions and discussed how we work, what is the style. The overwhelming majority of these orders have been rescheduled for autumn. Well, let's look at what will be done in the fall ... "

Stressing that the Far East is the most important region of the country, Putin called on the government to fulfill its own agreements. “We are now discussing with Igor Ivanovich [Sechin] before we meet,” the president summed up. - I think that he is right: everything does not work so efficiently with us. I draw your attention to this. ”