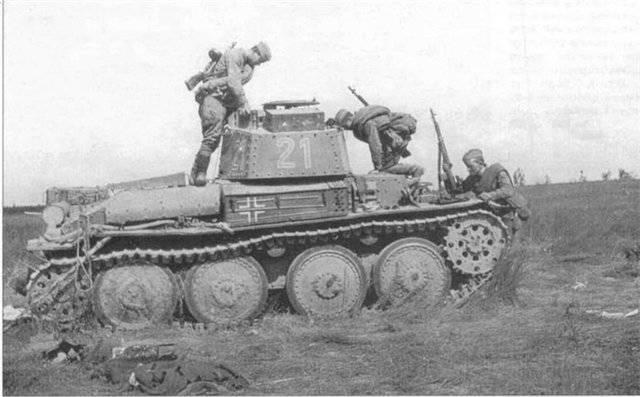 The feat of the Red Army chef Ivan Sereda is widely known. Armed with only a rifle and an ax, he independently captured a German tank with a crew. Hearing the approaching German armored car, Sereda was not at a loss and came up with an original plan for its capture. When the tank stopped, the cook climbed onto the tower and with an ax damaged machine gun trunks, and also closed the viewing slots with a piece of tarpaulin. After that, the resourceful Red Armyman began to loudly give orders to non-existent help and forced the tankers to surrender. This case looks real historical by curiosity, however, similar, somewhat strange, situations were repeated from time to time. Moreover, some unexpected, bold and original ways of dealing with the enemy’s armored vehicles were even recommended in practice.

For example, a few weeks before the feat of Sereda, the headquarters of the North-Western Front issued instructions to combat tanks. In the document signed by Lieutenant General N. Vatutin, among other things, in case of ammunition depletion it was recommended to “harvest mud-clay” and cover up the observation devices of enemy tanks. It is not known how many tank fighter fighters have successfully put into practice this recommendation. Nevertheless, the method of "blinding" the tanks was seriously considered, and in some units of the Red Army special trainings were even conducted. To cover the viewing slots, mainly raincoat tents were used. It is worth noting that this method of combating enemy tanks won certain fame after the Great Patriotic War. For example, in the movie "Maxim Perepelitsa", the main character paralyzed a conditioned enemy tank during exercises in such a way. 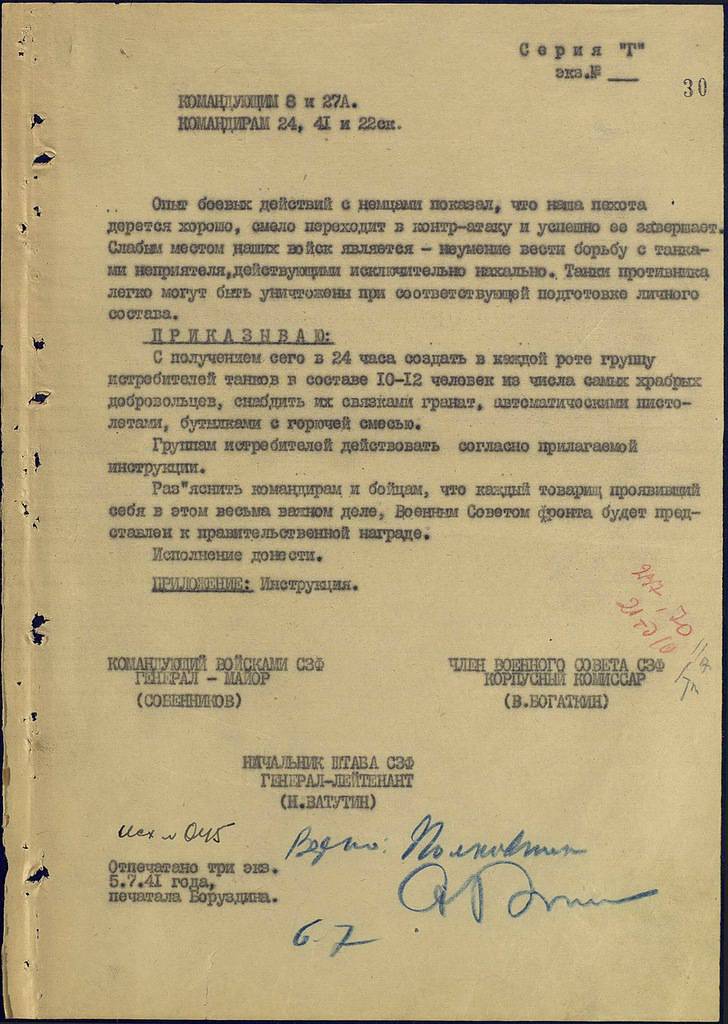 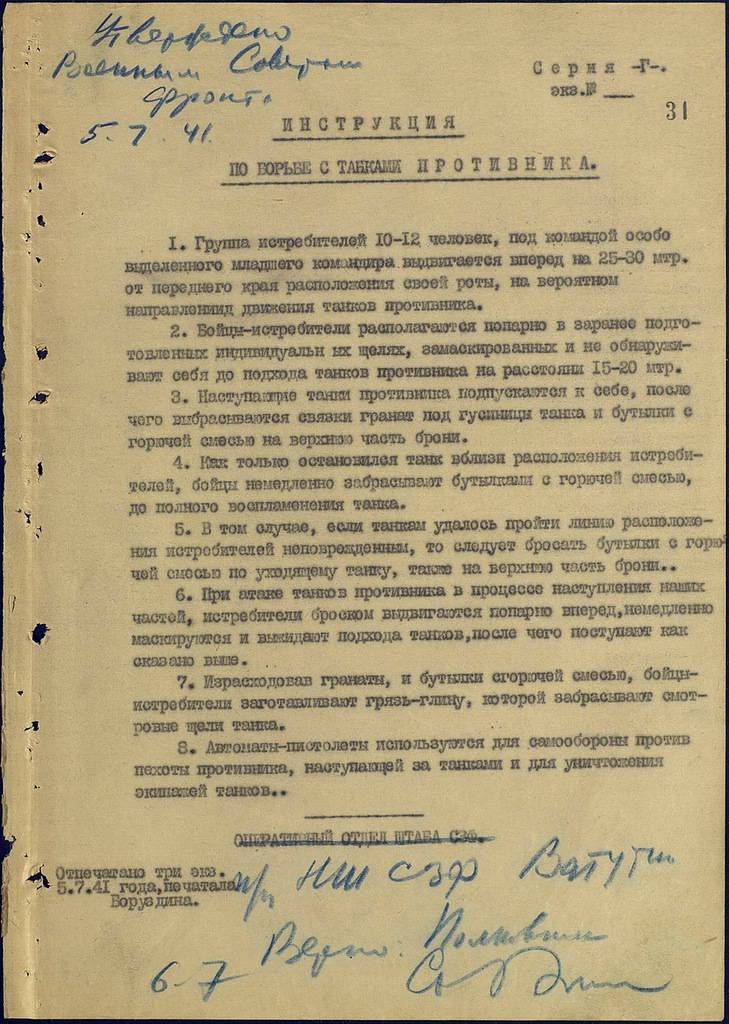 A tank with closed observation instruments retains mobility, but can no longer choose its own way. The inquisitive mind of the soldiers and commanders suggested several techniques that completely stopped the car. For example, during the Soviet-Finnish and Second World War, Finnish and British guides offered fighters and crowbars as an anti-tank weapon for the fighters. According to this idea, the soldiers or militia in ambush must wait for the enemy tanks and push iron crowbars, rails or logs into their undercarriage. Getting between the tracks and the track roller, such "weapon"Could block or even damage the propulsion tank. The stationary armored vehicle would then become an easy target for grenades or explosives, and the crew could not do anything, since an attempt to leave the tank would have unfortunate consequences.

Some sources mention the further development of this idea behind the authorship of some British "strategists". This time, the militiamen were advised to carry a rail, a large piece of cloth or blanket, a bucket of gasoline and matches. Fabrics or a blanket, gasoline and matches were required to set the tank on fire: the fabric had to be wound onto a rail, then the tank's chassis was locked, water was poured over with gasoline and set on fire. The use of anti-tank logs by Finnish soldiers has long been a subject of controversy. With regard to the English militia LDV, then, fortunately for volunteers, the Germans did not appear on the shores of Great Britain and did not give the opportunity to test the proposal in practice.

The widespread use of anti-tank guns has led to the appearance of appropriate recommendations for shooters. Together with thicker armor of combat vehicles, advice began to appear firing only on observation devices or other vulnerable parts. In particular, in the summer of 41, German and Soviet armored rifles received an order, according to which it was necessary to shoot at the gun trunks of enemy tanks. It is not difficult to guess how difficult such an accurate shot is. However, if the shooter still managed to get into the gun, the tankers got a lot of problems. At best, they had to solve repair problems. If the crew tried to make a shot from an already damaged gun, then this could result in serious damage to the car, injuries and even the death of tank crews. 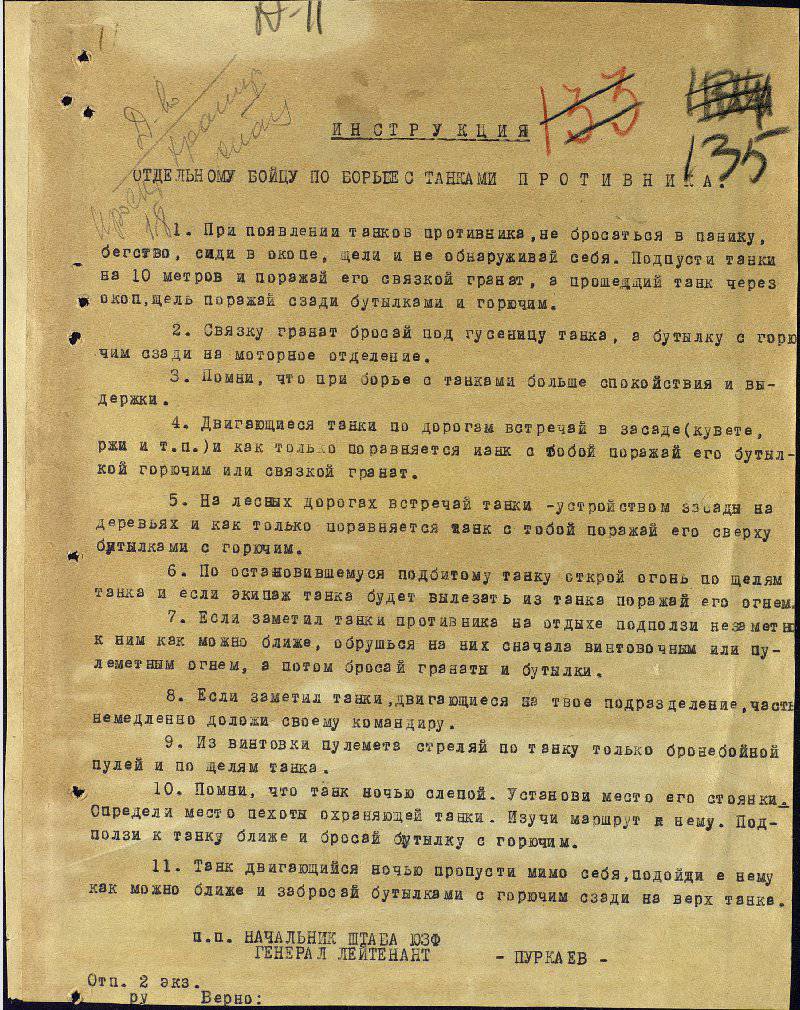 The most convenient means of destroying enemy tanks was explosives. However, the delivery of a charge to an armored vehicle became a serious and rather difficult task, complicated by the requirements of suitability for mass production and use and other factors. Thus, in the mid-thirties, in the Soviet Union, an idea emerged to involve dogs in the destruction of pet tanks. It was proposed to teach the dog to look for food under the tank and carry a special backpack with a charge and a fuse. Already during the Great Patriotic War, specially trained dogs destroyed about three hundred tanks (there are different figures in different sources). However, the complexity of the training and the death of dogs during blasting ultimately showed a lack of effectiveness of this technique. In addition, the Germans quickly realized that it was necessary to destroy the dog running to the tank as soon as possible. About a year after the start of the Great Patriotic Dog, tank destroyers stopped being used on fronts.

In other warring countries, attempts were also made to use animals, but man remained the most reliable "means" to destroy any targets. So, starting from a certain time, the fighters of the tanks of the American army began to receive explosives and long poles. It was assumed that with the help of the last soldiers will be able to enclose a charge under the enemy machine from a safe distance. This method looked interesting and promising, but it also had serious drawbacks. The fighter still had to crawl to the enemy tank and put himself at great risk. No less risked German soldiers, armed with a cumulative magnetic mine HHL-3. To install this ammunition required to get to the tank for a minimum distance or let it to him. After that, the soldier had to get up to his full height, attach the mine to the armor of the enemy machine and activate the fuse. By the end of the war in the Pacific, Japan began to arm its tank fighter soldiers with a bag of explosives. They did not care about the security of the fighter, since he had to die for the emperor, at the same time destroying the enemy’s tank.

A common feature of all the above methods of dealing with armored vehicles is their forced nature. Cook I. Sereda had no weapons other than a rifle and an ax, the supply and armament of the British militia left much to be desired, not all Red Army units had a sufficient number of modern anti-tank artillery, and the commanders of the Japanese army did not take losses into account at the end of the war. Being a kind of improvisation, all such non-standard methods for the destruction of tanks were not very convenient for mass use. For example, a method with a rail, cloth and gasoline in most cases could result in the death of fighter fighters. With the correct tactics of using armored vehicles, tankers risked only a few details of their car. The ratio of losses in the use of suicide bombing by Japan is not to be said.

All these specific features of the considered methods of dealing with armored vehicles eventually led to their gradual withering away. The warring countries already in the course of the Second World War began mass production of more effective convenient anti-tank weapons. However, on the way to anti-tank grenade launchers and missile complexes, military science had to do strange and unusual things.

"Instructions for the fight against Russian tanks"

Released in Berlin on July 27 1941, the High Command of the Army. The instructions indicate that she should not fall into the hands of the enemy, but judging by the mark on the transfer, she was captured on November 15, 1941, probably in the area of ​​Volovo station in the Tula region. 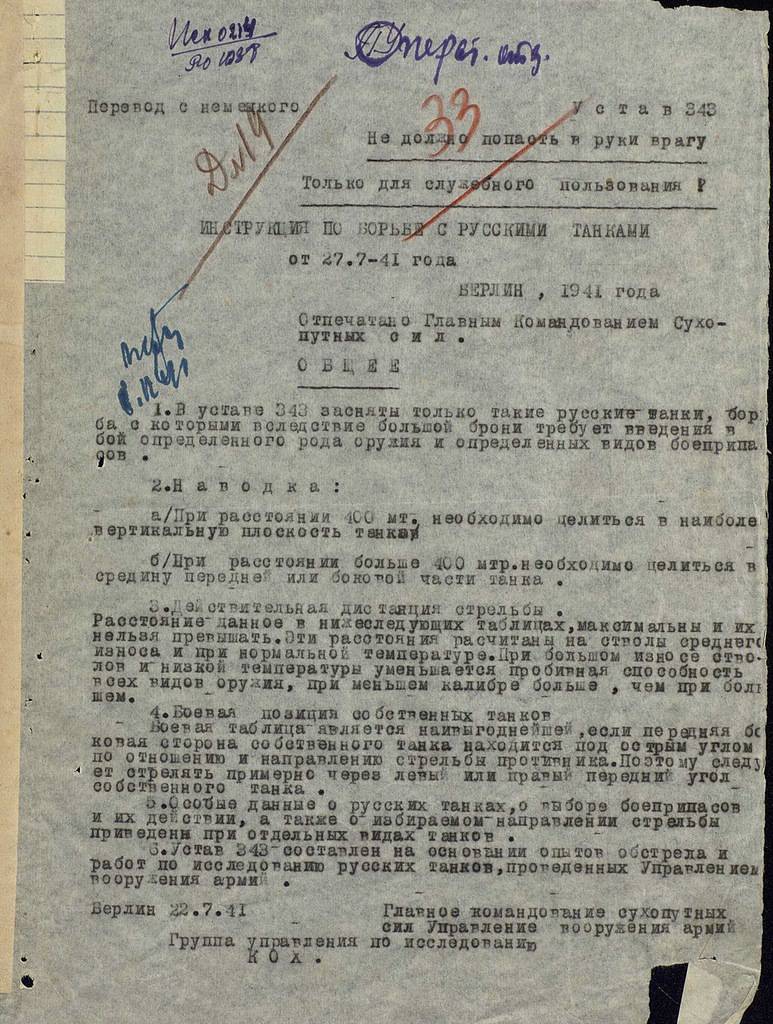 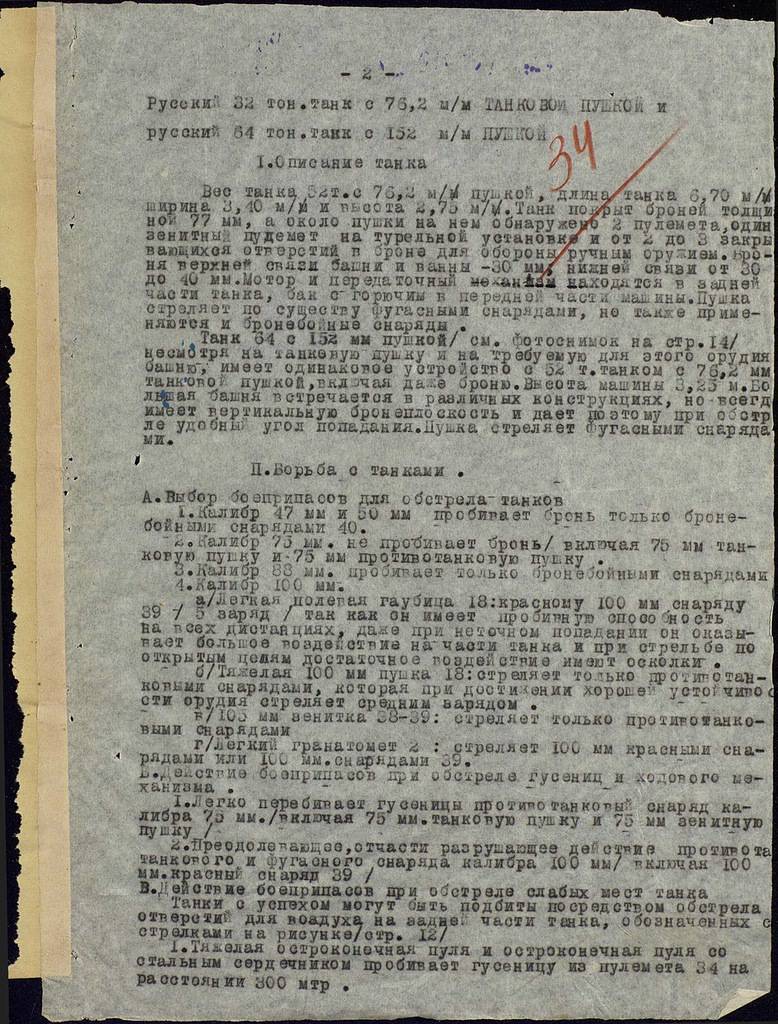 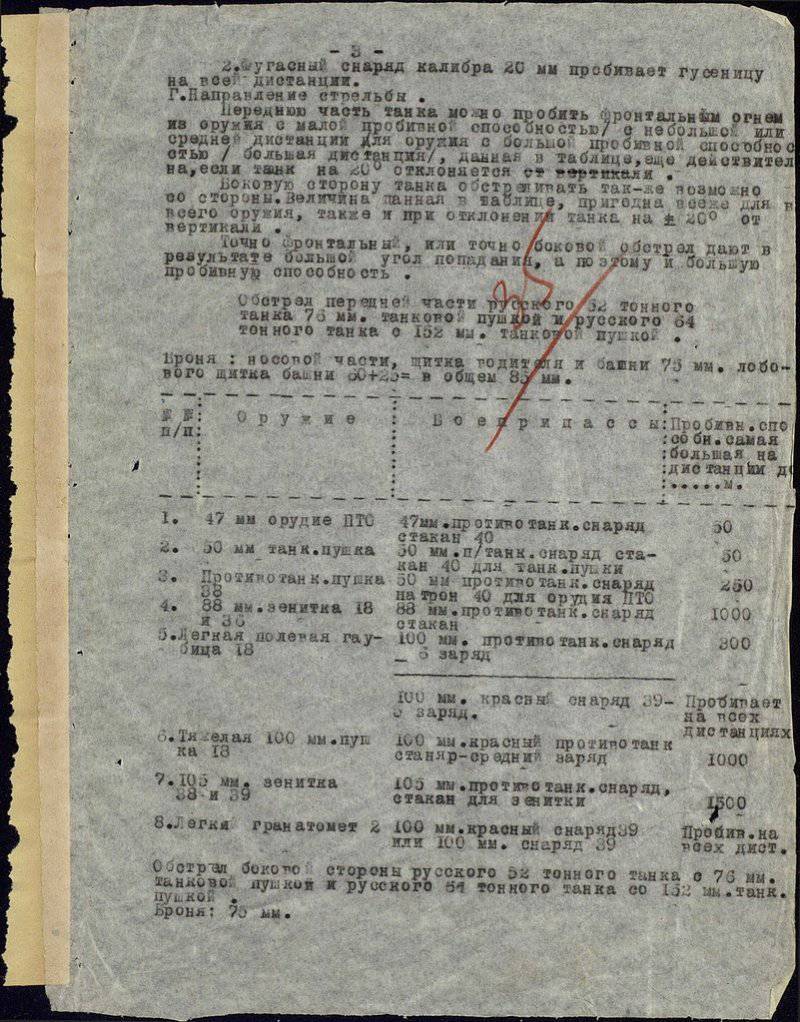 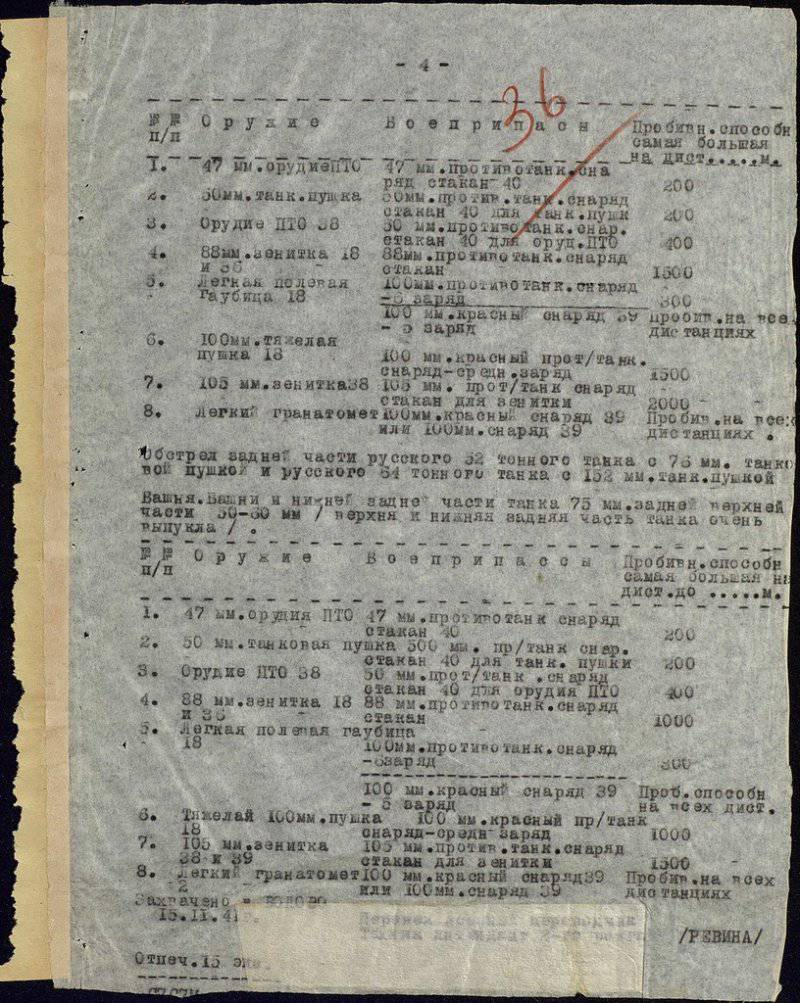 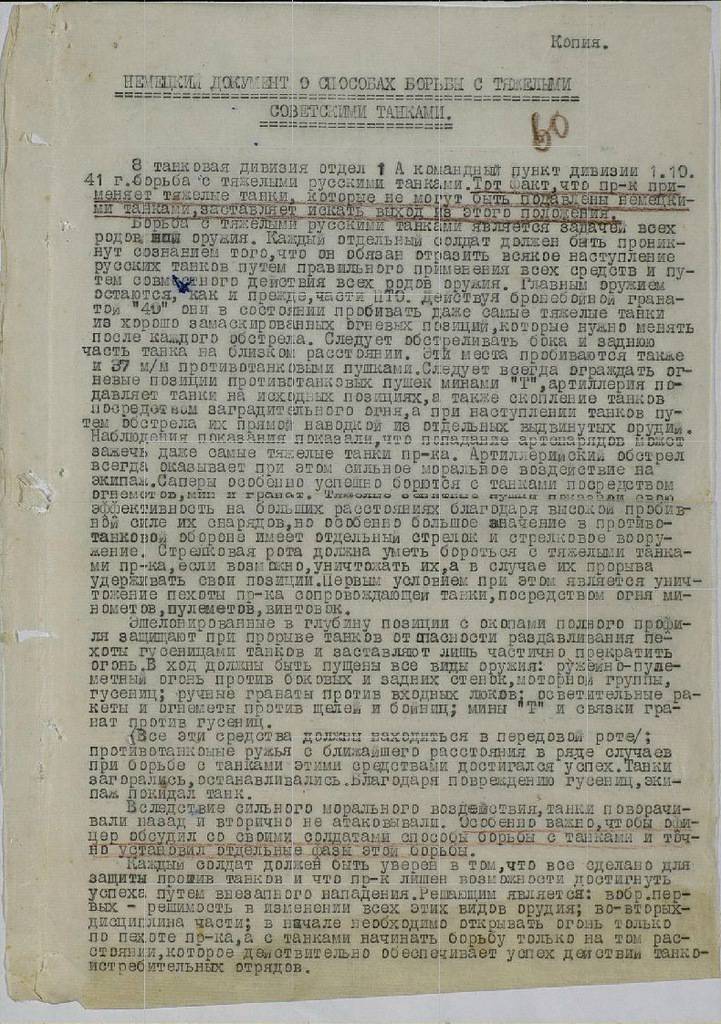