Can the Allied landing in Sicily be considered the reason for the termination of the German operation Citadel? 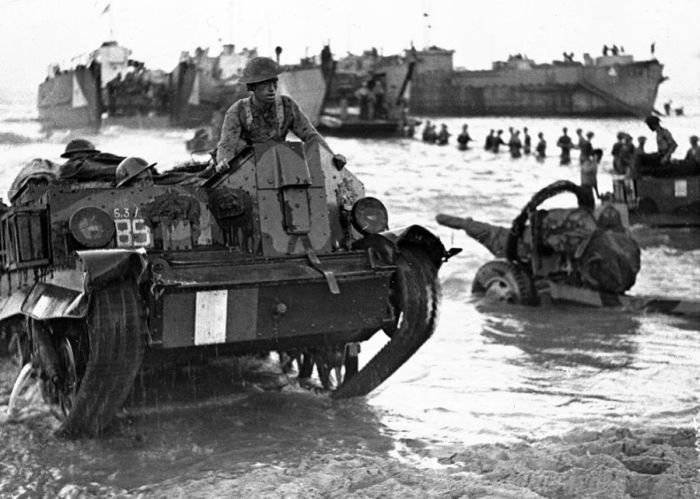 In the midst of the battle of Kursk 10 in July 1943, our Western allies began their landing in Sicily, with the beginning of the so-called Italian company, which then continued with the landing of allied forces in mainland Italy and the battles on the Gustav line. Cassino and Anzio. As a result, the Italian campaign ended with the surrender of German troops in Northern Italy 2 in May 1945.

According to some researchers, it was the beginning of the Italian company, in particular the landing of Anglo-Americans on the Italian island of Sicily, which allegedly became the main reason why the German command refused active offensive action on the southern Kursk arc, and indeed from continuing all of its famous Operations "Citadel", was it really so? And what was the landing operation of our allies?

The decision to embark on Sicily after the seizure of North Africa was made at a conference in Casablanca in January 1943. The views of the allies about the site of the invasion of Europe were divided. The Americans insisted on landing in France, Churchill insisted on the need to ensure the safety of maritime traffic through the Mediterranean.

The Allies were also inclined to consider political considerations for this operation. It was assumed that the seizure of Sicily and the direct threat of continental Italy would push the opposition to overthrow the Duce, so the Anglo-American troops in Sicily were mainly indirectly related to the upcoming Soviet-German battle on the Kursk fields, the USSR still did not recognize the Italian direction as TVD for opening the second front.
It is known that this operation was called the Husky (the landing of the Allies in Sicily) and generally lasted from July 10 to August 17 1943.

In Sicily, the 6th Italian army was located under the command of General Alfredo Guzzoni. It included the 12th and 16th Coast Guard Corps and four infantry divisions, a total of nine Italian divisions and army units, as well as the 14th German tank corps (two divisions, including the tank division "German Goering", later - four divisions).

All in all, Sicily had 300 thousand Italian and 40 thousand German soldiers, 147 tanks, 220 guns and about 600 aircraft. Plus, the Italian troops soon received additional reinforcements in the amount of 12 thousand. and 91 tank.
For the landing of the allies in Sicily as part of the two armies of the 15 group of armies there were 13 divisions, 3 tank brigades, 3 of the Commandos squadron and 3 of the Rangers battalion. The group of allied forces consisted of 470 thousand people and 600 tanks.

For most Americans and for the entire Canadian contingent, this was the first battle. The landing of the allies in Sicily began on the morning of July 10 1943 simultaneously from the sea and from the air on the southern coast in the Gulf of Gela and south of Syracuse.
Amphibious landing with a strong wind landed on the southern (Americans) and southeastern (British) coast of Sicily. The Canadian division, with strong resistance from the enemy, landed on the southernmost tip of the island near the village of Pacino.

Due to bad weather conditions, many troops landed in the wrong place and six hours later than intended. But using the element of surprise, the British approached Syracuse with almost no resistance. Canadians met a decisive rebuff of the Italian defense, located on the hills. The Canadians were thrown back to the shore, but with the approach of reinforcements continued to advance.

On the night of July 10, the Allies threw 4 air assault. The American landing of the 505 regiment of the 82 airborne division due to strong winds deviated from the course, and half of the American paratroopers did not reach their destinations. The British landing of 12 gliders, only one reached the goal, but many fell into the sea. 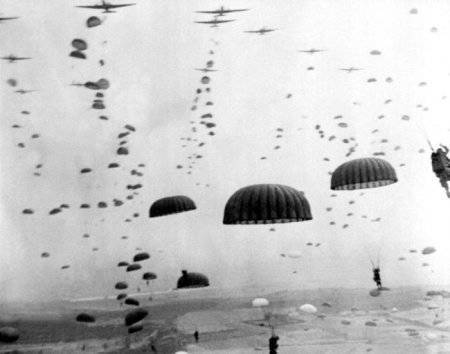 On July 11, Patton ordered the landing regiments, which were in reserve, to drop in the center of the coast. But the British Mediterranean Fleet was not informed about this and opened fire on C-47 transport aircraft that were carrying troops to the landing site.

As a result, 114 33 transport aircraft were shot down and 37 damaged, 318 people were victims of their own fire.
By July 14, the landing on the bridgehead was completed. Vizzini in the west and Augusta in the east were captured. Then in the British sector, the resistance of the enemy increased. On the west coast of Sicily, the Italians managed to restrain the Americans offensive in the region of Castrofillipo-Naro.

July 22 American troops captured Palermo. The Italian and German troops retreated to Messina. A fortified line (“the line of Etna”) was prepared around Messina to ensure the organized retreat of the Italo-German troops to the Apennine Peninsula (to mainland Italy).

25 July in Italy there was a palace coup. By order of King B. Mussolini was arrested, and the government was headed by Marshal P. Badoglio.

The Germans and Italians managed to keep the main forces of their troops in Sicily from being captured and to evacuate them orderly from the island along with military equipment. After all the troops not engaged in the defense of the Etna line were evacuated, under the cover of night, its defenders also crossed over to the peninsula. Evacuation was successful. The last German-Italian units left Sicily. 17 August 1943. Part of the US 3 Infantry Division entered Messina several hours after the end of the evacuation of the German-Italian troops.

The strategic goals of the Allied landings operation in Sicily were generally achieved, the Italian and German troops were knocked out of the island, the Mediterranean sea routes became more secure, the Italian dictator Benito Mussolini was overthrown, and the landing on the Apennine peninsula soon began mainland Italy.
In connection with the above facts, the question arises, what forces and means did the Germans intend to help their troops in Sicily?

At that time, it was known that the transfer of Wehrmacht divisions from the Eastern Front to the West was a fairly rare phenomenon, but the dispatch of German troops from the West to the East, to the Soviet-German front was commonplace.

For example, when the Wehrmacht suffered defeats near Moscow, Rostov, Tikhvin and Stalingrad, then from the end of 1941 to 1943 the Germans transferred 39 divisions and six brigades from the West. Among them, 18 divisions from France, moreover, later, even at the final stage of the war, and this 15 January 1945 g, to prevent the collapse of the Eastern Front, Hitler ordered to transfer more 40 divisions from the West there.

The decision to transfer the entire 3-x SS armored divisions to Italy, was allegedly made and connected precisely with the landing of the Allies in Sicily.
The Germans launched Operation Citadel 5 on July 1943, and on July 11, the Allies landed their troops in Sicily. However, the German parachute division "Hermann Goering" blocks landing. On the same day, von Kluge to the north stops the offensive. Another parachute division is being deployed from southern France to Sicily.
July 12 begins the offensive operation of the Western, Bryansk and Central Fronts of the Soviet troops.

13 July Hitler allows the transition to defense in the north and the continuation of the offensive in the south. Kesselring reports from Sicily that the situation of the German troops is getting worse, even critical.

July 15 from Italy to Sicily 29 tank armored grenadier division forwarded. On the same day, the offensive is also stopped in the south of the Orel-Kursk arc.

July 17 begins an offensive in the south of the South-Western and Western fronts. On the same day, the Germans withdraw three divisions of the SS Second Tank Corps to the reserve, and the next day the 3 Tank Division and the Grossdeutschland Division. Grossdeuchland is being transferred under the Eagle, SS divisions “Reich” and “Totenkopf” - to the Donbass, and “Leybshtandart”, without tanks, - to Italy.
Manstein, in his memoirs, and American historians hold the opinion that it was the operation in Sicily that caused Hitler to wind down the Citadel.

Manstein writes that at a meeting at GHQ, Hitler said: “that Sicily is most likely lost and we should expect an Allied landing in the near future. The Italian troops are not fighting, they immediately surrender, so the forces in the Balkans and in Italy should be strengthened. The citadel cannot continue further, since part of the forces must be transferred to the south. ”
Von Kluge declared that the Model army was not able to carry out the offensive and could hardly restrain the onslaught of the enemy. However, Manstein himself insisted on the offensive, since, according to his calculations, the Soviet offensive was already running out of steam - the last reserves were put into battle. As a result, Hitler allowed to continue the offensive in the south, which will allow to withdraw part of the forces and transfer them to Italy.

However, the study of materials and transcripts of other meetings shows that Manstein somewhat distorts events.
According to Manstein himself, an offensive in the south would have helped the north wing to strengthen the defenses, but the offensive would not have progressed further Kursk. Therefore, the meaning of the Citadel itself has already been lost, and the attack on the southern wing only straightened the situation and did not belong to the Citadel itself.

However, as Soviet historians believe, the result of the collapse of the operation "Citadel" was precisely the offensive of the Soviet troops. And the transfer of troops to Italy began only on July 25. 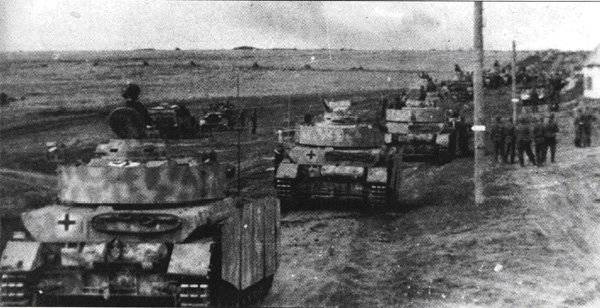 Even despite the statement of Hitler, if of course you believe Manstein, the facts show that neither the SS division “Das Reich” nor the SS division “Headless” did not fall into Italy, but were used as a “fire brigade” to repel the Soviet the offensive first on the Mius-front at the end of July 1943, and then in August they participated in a counterattack near Kharkov, in the area of ​​Bogodukhov.

Actually, only one personnel of the division left for Italy left in the ranks after the fighting on the Kursk Bulge. It was hardly a terrible force capable of stopping the Allied landing in Italy. That is why Leibstandard was based in northern Italy and dealt only with police and punitive operations.

To be precise, the "Leibshtandart" was sent for re-formation and rest. Moreover, in Italy this division did not stay for a long time and in November 1943 it was returned again to the Eastern Front. Directly to Sicily, the Germans managed to transfer only two divisions, one of southern France and one of Italy.

For the American troops, landing in Sicily was the first serious test at the European theater of operations, but the landing on Sicily was not considered to be the opening of a second front in Europe, and in this case it is more important - they, the Anglo-Americans. Churchill and Roosevelt at the beginning of 43-th concluded that this year a full-scale landing in Europe is not yet possible, but to hit in the soft southern underbelly of the enemy, in Italy, is quite capable, which they successfully did.

Ctrl Enter
Noticed oshЫbku Highlight text and press. Ctrl + Enter
We are
"Fire arc". Day of the defeat of the German troops by the Soviet troops in the Battle of KurskStalingrad in Italian
Military Reviewin Yandex News
Military Reviewin Google News
50 comments
Information
Dear reader, to leave comments on the publication, you must sign in.