The second nuclear submarine for India?

July 17 2013
24
In April last year, the nuclear submarine (NS) of the INS Chakra expanded the composition of the Indian Navy. This submarine was built in Russia on the project 971 "Pike-B" and before the transfer of India was called K-152 "Nerpa". In accordance with the agreement of 2004, the Russian industry completed the construction of this submarine and transferred the finished ship to the Indian naval seamen. According to the latest reports of the Indian media, in the near future, another such contract may appear, thanks to which the Indian Navy will receive another Russian multi-purpose nuclear submarine. 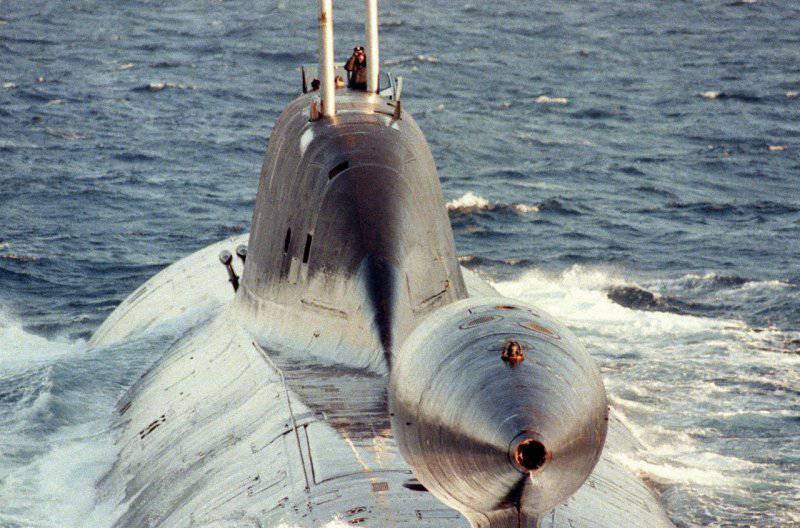 It is worth noting that the first reports about the possible signing of such a message appeared in the spring of this year. Then news published with reference to some sources in the leadership of the Russian defense industry. At the same time, all information about the contract at that time was limited to reports on its principal possibility and procedure for financing. It was alleged that India intends to pay for the completion of the construction of some unfinished submarine and then purchase it on a leasing basis.

In early July, new messages on this topic. The Indian edition of Indian Express has published some of the statements of the general director of the St. Petersburg engineering design bureau Malakhit (SPMBM Makhalit) V. Dorofeyev. According to the head of the design organization, Russia and India are ready to begin negotiations on the completion and transfer of a new submarine. It is proposed to build a second nuclear submarine for the Indian Navy using the existing reserve left from the time of the Soviet Union.

Representatives of the Indian naval forces have not yet commented on the statements of the General Director of the Malachite Special Design Bureau of Special Forces. At the same time, the former leadership of the Indian military fleet repeatedly stated the possibility of signing a new agreement on the transfer of multi-purpose submarines on lease. However, any details regarding the terms of such a contract were not disclosed. Probably, in New Delhi at that time there was still no consensus about the feasibility and necessity of acquiring the second Russian submarine of project 971.

Despite the lack of comments from Indian officials, assumptions about the technical side of a possible contract have already begun to appear. It is alleged that the submarine "Irbis", built at the Amur shipyard (Komsomolsk-on-Amur), will be completed for India. This submarine was laid in 1994 year, but after about two years, construction stopped due to lack of funding. By this time, the readiness of the boat exceeded 40%. According to reports, the workers of the Amur plant managed to build a solid submarine hull and begin assembling its other units. In 2011, it became known that the Komsomol enterprise would no longer be engaged in the construction of nuclear submarines. As a result, the frozen work on the "Irbis" officially stopped.

In the case of the signing of the contract, it is likely that the construction of the Irbis nuclear multi-purpose submarine will be resumed. Moreover, the construction project is likely to be finalized in accordance with the requirements of the customer and the experience gained in carrying out the contract for the transfer of the Nerpa nuclear submarine to India. Full official information about the future of the unfinished submarine in Komsomolsk-on-Amur, for obvious reasons, is not yet available. The first messages on this topic will appear only after Russia and India have agreed on the completion of the construction of the boat, and the Indian military will form their list of requirements for it.

In an interview for Indian Express, Malachite General Director V. Dorofeyev noted that if the decision was made to supply the Indian submarine, the Russian industry would have no problems with the fulfillment of such an order. As for the decision itself, this issue may be discussed at the upcoming talks between the top leaders of Russia and India. Other aspects of Russian-Indian cooperation in the field of submarines will depend on the decision of politicians. In particular, it is the Russian leadership that will decide whether Russian scientists and designers should help their Indian colleagues in fine-tuning the INS Arihant ballistic missile submarine.

The cost of transfer to the leasing of the second submarine can only guess. The lease of the Nerpa / INS Chakra submarine on lease for a period of ten years will cost 970 million dollars to the Indian budget. Judging by the available data, the completion of the construction of the submarine "Irbis" with the equipment of new equipment can significantly increase its value. However, in the present circumstances, India can agree to this.

Currently, New Delhi is doing everything possible to build a full-fledged nuclear submarine fleet. Now in the Indian Navy there is only one combat submarine - the multi-purpose submarine INS Chakra. The second boat with a nuclear power plant (INS Arihant) is still being tested, and after being included in the fleet it will carry ballistic missiles. For comparison, it is worth quoting the figures of the submarine fleet of China, which is the main competitor of the Indian Navy. To date, the Chinese military has four ballistic missile submarines and five multi-purpose nuclear submarines. The lag of the Indian Navy is great and requires early action.

Since India does not yet have the ability to simultaneously build both strategic and multi-purpose submarines with nuclear reactors, it has to cooperate with foreign countries. In this regard, the leasing of necessary equipment is one of the most convenient ways for India to increase the potential of its naval forces. In this case, the rental of nuclear submarines allows you to circumvent the existing legal restrictions relating to the sale of military equipment of this class. Thus, with the help of contracts with Russia, India simultaneously solves several problems of various kinds.

As mentioned above, the Indian command has not yet confirmed and denied information about the imminent start of negotiations on the completion and leasing of the second submarine. However, the current situation indicates a high probability of signing a new contract. Therefore, in the near future corresponding official statements by Indian military leaders and government officials may appear.

Ctrl Enter
Noticed oshЫbku Highlight text and press. Ctrl + Enter
We are
Israel's defense industry. 5 part10 rating of the most significant supply programs and export contracts of Russia according to the 2011 results of the year in the BMT segment
24 comments
Information
Dear reader, to leave comments on the publication, you must to register.