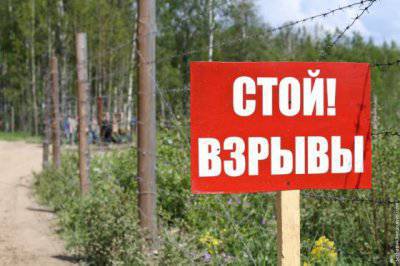 How to effectively extinguish fires in the army arsenals


Not far from the city of Chapaevsk in the Samara region in the evening of June 9, several powerful explosions thundered at the test site belonging to the Ministry of Industry and Trade of the Russian Federation, then a fire broke out. According to experts, the radius of expansion of the shells was 18 m. Residents of nearby settlements - about 500 thousand people - were urgently evacuated. As a result of the incident, one person died, more than 6 sought medical help.

One of the most difficult, and still effectively unsolved problems is to fairly quickly, timely extinguishing fires in ammunition depots, which can prevent explosions of ammunition starting from 10 minutes from the start of the fire.

In fact, firefighters only observe the complete burnout of the ammunition piles and at the same time try to only localize the fire, i.e. do not let him spread to the neighboring piles. But when ammunition starts to burst in a burning pile, even this passive “quenching” stops immediately, and firefighters quickly evacuate several kilometers from the explosions. This is also an ideal option when at least attempts are made to put out the fire. As a rule, firefighters do not know when the fire started, they only fix it from a certain stage of its development. Experimental field testing, field studies conducted in the 80-ies in the USSR, made it possible to establish that the explosions of ammunition begin in 8 – 12 minutes from the start of combustion. Since firefighters do not know exactly when ammunition in a burning pile will explode, in most cases they do not risk approaching it and have every reason to do so because they do not have the equipment capable of ensuring the safe and effective extinguishing of a burning ammunition pile.

As the analysis of the development of fire ammunition piles shows, modern measures to prevent them are ineffective. The deep embankments around the repositories, lightning arresters, round-the-clock video surveillance do not save the spread of forest and steppe fire on the territory of the base, especially in strong winds, and also cannot save it from a skilled terrorist attack. It does not help and disassembly of ammunition - storing warheads separately from the fuses - as the explosive charges in the warheads or gunpowder in the cartridges explode from heating, and not from the triggering of fuses or primer capsules.

The fires at the woodworking industry are of the same type with these fires, the control of which is also a very difficult task and, as a rule, firefighters do not extinguish burning piles of wood, lumber, but prevent neighboring piles from fire. As practice shows, modern mechanical, pneumatic, hydraulic installations for supplying fire extinguishing compositions do not provide prompt extinguishing of fires even at the initial stage of their development, due to the large time required for transportation and deployment of fire equipment, as well as to achieve effective extinguishing mode and coordination of the joint work of several fire engines. The existing fire extinguishing equipment can not effectively deal with advanced fires, due to the small values ​​of the parameters of fire extinguishing jets: power, speed, range, front area, penetrating ability. It is almost impossible to localize and extinguish even a single wooden stack using traditional fire extinguishing methods and technical means. The short range of extinguishing leads to the need for long-term work in the area affected by an explosion and a fire flame.

The most promising for solving this problem are multi-barrel installations for the pulsed supply of fire extinguishing compositions based on the chassis tanks T-54, T-55, T-62, two-axle trailers, carriages, SUVs and trucks. These installations provide a fast, powerful, multiple extinguishing action that is flexibly adjustable in its parameters: front area, supply rate of the extinguishing agent.

There is an important reason that in addition to fire tanks in the arsenals it is necessary to use wheeled impulse fire engines that start up and arrive at the place of fire much faster than tanks. Tracked armored fire truck may not have time to prevent the explosion of ammunition in the stack, but it can work effectively in the area affected by the explosions.

The first multi-barreled fireplant on the skids was tested in 1982, and since then, more and more intensive work has been carried out to improve multi-barreled systems. The optimal caliber and barrel length have been established, a multi-barrel system layout has been developed, separate sleeve case elements have been created: an expelling charge and an airtight cylindrical sleeve-container that provides fast charging into the barrel and long-term storage of any extinguishing agent powder, gel, liquid guaranteed up to 10 – 15 years , with various characteristics: dispersion, specific gravity, density, viscosity, wettability, chemical activity. This makes it possible to concentrate in many places sufficient stocks of fire extinguishing ammunition, as well as to mount charged multi-barrel modules in dangerous areas, and to easily ensure their long-term standby. Always and immediately provide a combined fire extinguishing effect with the help of several consecutive, with adjustable intervals, volleys of various sprayed fire extinguishing compositions.

Pulsed multilateral installations of other designs, for example, pneumatic or 120 mm powder, do not provide a fast and efficient fire extinguishing process.

In the 1988 year in Balakley on the basis of an arsenal of ammunition tests were conducted. At the first stage, May-June, 5 model container stacks were put out — ammunition boxes of sizes 12х6х3,5 m (12 m at the front, 6 m in depth and 3,5 m in height) using traditional fire equipment based on the GMM-54 tank, wheel-mounted GPM-40, wheels on the base of the GPM-4 tank, wheels of the wheels of the GMM-8 tank, wheels of the wheels of the wheels of the GMM-20, 25 m in height). machines (AOC-10), turbojet AGWT. This traditional technique failed to put out the 12 burning piles after the XNUMX min. free burning. The piles were completely burned in XNUMX-XNUMX mines, several shells with powder charges exploded in them exploded XNUMX-XNUMX minutes from the start of the piles fire and were extinguished only when the boxes collapsed and turned into a pile of burning debris.

Then the same pile was re-ignited with the free burning time of 12 min. Simultaneous volleys from pulsed installations located at right angles from the front of the 25-1 recoil barrel and from the front of the 30-1 cannon stack made it possible to bring down the fire and completely extinguish the stack by ejecting a mass of sprayed water - a gas-and-water squall. When extinguishing the powder vortex from the 2 side, it took the fireman to work with a manual barrel for 2,5 minutes.

At the second stage of testing, the second stack was ignited and from the 25 m distance after 10 min of free burning from the 35 m distance (from the 25 of the receiver unit) extinguished this pile in 1 mines (54 sec.) With three volleys of 8 trunks that created successive squalls of sprayed water. Then the pile with a surface well-soaked with water was hardly re-ignited using more than 60 l of gasoline. This in itself is good evidence of the effectiveness of pulsed extinguishing and the practical impossibility of re-ignition after this extinguishing. After 10 min. free burning was carried out by extinguishing 25 with three successive volleys of 10 barrels from an 30-ti barreled device.

Analysis of the two types of extinguishing a burning stack of powder and water sprayed showed the indisputable advantages of the latter, as well as a number of the following advantages of a gas-water fine squall:

The extinguishing of the 3 stack with a powerful compact water jet was lengthy up to 40 minutes and required at least 10 AT-40 fire engines with water. This meant the actual failure of the extinguishing - the impossibility of preventing the burning of the stack from breaking into an explosion of ammunition in the non-quenched area. By the end of the fire, the stack was completely destroyed by a combination of fire and the impact of a water jet.

The stack that was extinguished with the help of AGWT burned down the fastest - approximately after 4 – 5min after the start of extinguishing, because the extinguishing effect was local. A stack with real ammunition would undoubtedly explode during fire fighting and destroy vehicles with firefighters.

Analysis of the results of the experiments left no doubt that the most effective method of extinguishing is pulsed finely dispersed water immediately over the entire front of the combustion section (from the direction of the volley) with a powerful penetrating effect that provides total destruction, cooling and dilution of the condensed combustion zone. The development of multilateral installations on the chassis of gun carriages, trucks, tanks and unitary sealed cartridges with various fire extinguishing agents allowed the implementation of a combined method of pulse extinguishing.

The trunks of a multilateral installation can be charged with various fire extinguishing agents: liquids, solutions, gels, powders and bulk materials. Due to this, for the first time one fire engine can carry out completely autonomous, combined effective extinguishing of various types of fires. It is also possible to charge trunks and effectively spray various natural materials from them: soil, dirt, sand, water of any turbidity, dust, snow, ice, etc.

Thus, the operation of this installation to a relatively small extent depends on the supply of containers with fire extinguishing composition. When all barrels are fully activated, for example, 5 barrels on 10 barrels, it is possible to extinguish a pile of ammunition for no more than 1 minutes after 10 minutes of free burning of the stack. Such work for 10 – 15 mines can be performed by at least 4-ex traditional fire tanks GPM-54. This number of fire tanks is not in any Russian arsenal and it is difficult to put into practice their coordinated work on a burning stack in open areas.

All types of multi-barred impulse fire installations have already been produced and can be produced at Russian factories without imported components. It is realistic to equip the largest ammunition bases and arsenals with 1 – 2 for the year, and all the other ammunition depots in Russia in 3 – 5 for years. This will greatly reduce the likelihood of catastrophic fires and explosions that were in Chapaevsk, Lozovoi, Novo-Bogdanovka, etc. This task is very real and very important for the combat capability of the Russian army and the security of the country.