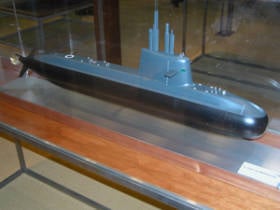 Russia and Italy will improve the project of creating a non-nuclear submarine (NNS) S-1000 (in the picture) for third countries. This correspondent .ARMS-TASS reported in the company Rosoboronexport.


From the Russian side, the optimization of S-1000 will be carried out by the Central Design Bureau of Marine Engineering (CDB MT) Rubin, which is a participant in the project.

The development of the conceptual design of the S-1000 submarines with a tonnage of 1000 tons for third countries was completed by specialists from the Central Design Bureau MT Rubin and the Italian company Fincantieri several years ago. The model of the boat was presented at the 20-m and 21-m International naval salons "Euronaval-2006" and "Euronaval-2008" in the exposition of the company "Fincantieri".

As the correspondent of ARMS-TASS was informed at the Central Design Bureau MT Rubin, at present the S-1000 concept in the proposed configuration is of little interest from potential customers. To "revive" the marketing campaign of this boat, it is planned to improve the project in the interests of those countries that are interested in creating an underwater fleet. First of all, these are the countries of the Middle East and Southeast Asia.

As ARARC-TASS correspondent was previously told by Enrico Bonetti, “Fincantieri” commercial director, the architecture of the naval subsystems has been defined, the equipment has been installed, the image of the combat integrated system has been determined. The boat was marketed in the global market and, taking into account its conjuncture, the main tactical and technical elements and main dimensions of the S-1000 boat were determined: length 56,2 m, outer diameter of the robust hull 5,5 m, submersible displacement about 1100 tons , the maximum travel speed in the submerged position over 250 nodes. The boat must be equipped with an air-independent power plant (VNEU) Italian development.

A joint project to develop a small NPL was launched by Finkantieri and Central Design Bureau MT Rubin in 2004. Project S-1000 submarines are designed for anti-submarine warfare, reconnaissance missions, as well as supporting special operations forces and transporting submarine saboteurs. The boat can perform these tasks both in shallow coastal zones and in deep sea areas. Secondary tasks include fighting surface ships, setting minefields and supporting action aviation on the sea.

The crew of the boat - 16 people, in addition to which on board can still be 12 fighters from the special operations forces.

Ctrl Enter
Noticed oshЫbku Highlight text and press. Ctrl + Enter
We are
Completed a surprise check of the troops of the Central Military DistrictDelhi narrows its market for Moscow
Military Reviewin Yandex News
Military Reviewin Google News
18 comments
Information
Dear reader, to leave comments on the publication, you must sign in.