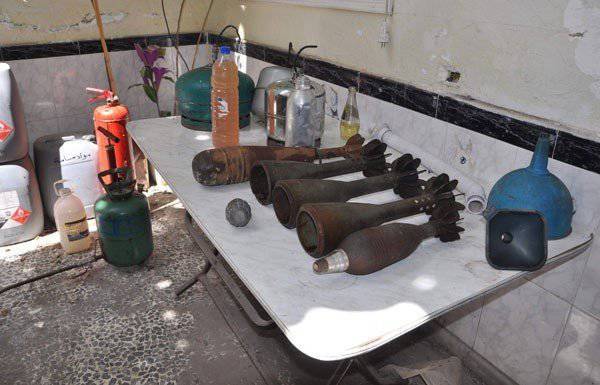 In the suburb of Damascus, the Jobar area, Syrian soldiers discovered a terrorist base, which housed an underground workshop for the manufacture of home-made shells and a whole laboratory with toxic chemicals, including chlorine and its compounds. In many containers - marking of foreign countries, especially a lot of toxic substances - from Saudi Arabia. There were also parts from mortar shells, which the terrorists intended to fill with chemical preparations.

Shortly before, in the Syrian city of Baniyas, hundreds of barrels with toxic chemicals were found at one of the terrorist bases. UAR Permanent Representative to the UN, Bashar Al-Jafari, then stated at the UN meeting that these substances would be enough to destroy an entire city, and possibly an entire country.

Something is not heard voices of those imaginary "friends of Syria" both from the West and from the East, who are sometimes inclined to gather under the pathetic signboard and cry about the sufferings of the Syrian people but "from dictatorship." They allegedly care about peaceful citizens, but for some reason they do not care that thousands or even tens of thousands of people may die at the hands of terrorists they support? No, they carelessly continue to feed the terrorist Islamist Frankenstein, threatening everyone.

It remains only to assume what is the main goal of those who created these underground warehouses with chemicals - shelling cities in order to destroy as many people as possible and intimidate the rest? Or is it a provocation to blame the Syrian government and scream about the “no-fly zone” again?

It would seem that after Russia provided the UN with real evidence of the use of the so-called "opposition" by the militants weapons in the Khan Al-Asal district of Aleppo Province - such speculations should have stopped once and for all. After all, on one side of the scale - the Russian - analyzes, taken and carried out according to the rules, in the relevant laboratories. On the other side of the scale - the American - dubious claims, the authenticity of which cannot be verified even by the US special services, samples illegally taken by a certain journalist who knows where, without witnesses, are passed from hand to hand.

But the States not only want provocations, but also cut them "from a sick head to a healthy one." US State Department spokeswoman Jennifer Psaki said that, it turns out, "Russia has blocked the work of the UN Security Council in ensuring access to the mission of UN experts in Syria." Apparently, the provision of real information, real results of real analyzes is “blocking work”.

Yes, this is “blocking work” by total disinformation. Judging by such statements and actions of the USA, they are angry because Russia is blocking another big lie. And not just a big lie, but a killer lie of the same type that has already destroyed hundreds of thousands of people in Iraq.

As stated by Russian Foreign Ministry spokesman Alexander Lukashevich, "the said statement is an incorrect interpretation of the real state of affairs around an international investigation into the possible use of chemical weapons in Syria." He recalled that it was Syria who turned to the UN with a request to investigate the incident in Khan al-Asal. But some parties at the UN did everything to disrupt the investigation. In particular, they put forward unacceptable conditions for the Syrian side, and instead of investigating a particular case, they want to create a pretext for external intervention.

One of the main arguments of terrorist lawyers is that, allegedly, they cannot have chemical weapons - only government forces have it. And here the “oppositionists” militants are once again caught on the presence of poisonous substances.

It is no coincidence that the label “Made in Saudi Arabia” stands on containers with toxic substances. Recently, a certain Ahmad Zharba, one of the relatives of the Saudi king’s wife, was appointed the so-called “leader of the Syrian opposition”. Prior to this, the "opposition" was headed by Qatari's proteges The first statement of the new "leader" stated that the "opposition" is waiting for weapons from Riyadh.

Saudi Arabia is a state that supposedly honors the religious principles of Islam. There are the main shrines of the Muslim world. And now this state sends death for export. But what would happen if the cache was not found? The ancient city of Damascus fired with shells with chemicals, people who would die in terrible agony? Is this what Muslims of the whole world want, who are going to Mecca to communicate with God?

The West has so forgotten its original principles that it indifferently sees how the “opposition” it supports cuts the heads of Christian priests. Some forces of the East also completely forget about all their original, high principles, sending chemicals into the hands of outspoken thugs. And what kind of such a “democracy” is this, if for its sake - such insanity?

And even more alarming question - how many of these warehouses have not yet been discovered by the Syrian army?

Ctrl Enter
Noticed oshЫbku Highlight text and press. Ctrl + Enter
We are
Iran in the Syrian conflict. The confrontation with Saudi Arabia and the interests of the ShiitesSyria: Americans scare themselves, and Asma Asad buys chairs
Military Reviewin Yandex News
Military Reviewin Google News
40 comments
Information
Dear reader, to leave comments on the publication, you must to register.