July 16 2013
6
In the late sixties and early seventies, the English main battle tank Chieftain ("Leader") was considered one of the best vehicles of its class. In that tank all the latest achievements of the British defense industry were combined, thanks to which he regularly received the most flattering assessments. Naturally, the high declared characteristics quickly attracted the attention of third countries. Some Middle Eastern states that had good relations with Great Britain showed a desire to purchase a certain number of Chieftain tanks for themselves. One of the first potential buyers was Israel. But already in 1969, after another armed confrontation with neighboring countries, he lost the opportunity to renew his fleet of armored forces, as London decided not to violate the arms embargo on Israel. 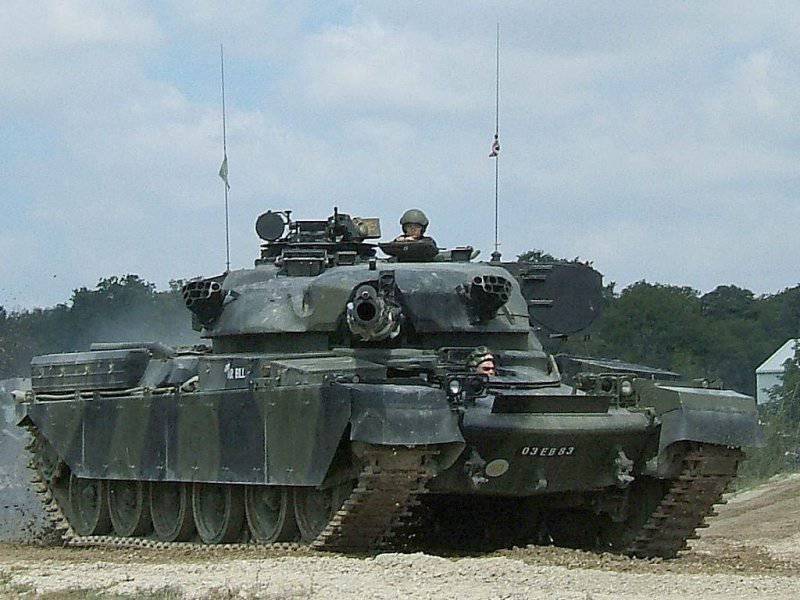 Shortly after the failed agreement with Israel, negotiations began with other states in the region. As a result of such events, the UK has signed several contracts for the supply of armored vehicles. At the same time, some customers complained about certain design features of the Chieftain tank. To solve such problems, it was proposed to design special modifications for certain countries. Such improvements of the tanks affected the price of the project, but the customers did not oppose, since they themselves initiated the improvement of the original armored vehicle.

The first country to express a desire to get a Chieftain tank adapted to its conditions was Iran. Back in 1971, he ordered 707 tanks and 73 armored recovery vehicles based on them. In the future, Tehran was going to buy more 1200 tanks, but he was not satisfied with the available characteristics of the proposed technology. The Iranian military put out a list of the deficiencies of “Chieftain” that needed to be corrected before purchase. First of all, not too high engine power and, as a result, insufficient driving characteristics of the tank were criticized. Also, the Iranians were not satisfied with the insufficiently smooth running of the car on rough terrain.

After clarifying all the details of the claims of the Iranian side in 1974, the British launched a project called Shir Iran (“Leo of Iran”). It was assumed that, due to the timing of the start of serial construction of the upgraded Chieftain tanks, the first modernized vehicles could be delivered to the customer as part of the first contract. It is worth noting that the UK, fulfilling its obligations under the first contract, initially supplied the Chiften tanks to Iran with the Mk.3 / 3P model, which was slightly different from the version for its own armed forces.

As a basis for the Shir Iran tank, the Chieftain Mk.5 armored vehicle was chosen. Its characteristics were proposed to improve with the help of a new power plant and an upgrade of electronic equipment. According to the upgrade project, the Rolls-Royce CV-12TCA diesel engine with a horsepower 1200 and hydrodynamic transmission David Brown Engineering TN-37 with a hydrostatic transmission was supposed to stand in the engine-transmission compartment of the tank. With such a power plant, the "Leo of Iran" had a power density of more than 23 hp. per ton, which was about one and a half times higher than the original tank "Chieftain". At the same time, the development and refinement of the new tank diesel engine was delayed. Specialists of the company Rolls-Royce did not meet the deadlines, because of what Britain had to come up with a new proposal for the contract.

The British and Iranian parties reached an agreement on the gradual improvement of the tank and the supply of equipment in several batches: each subsequent one will be better than the previous one. Thus, in the mid-seventies, Iran received the first 187 tanks of the Chieftain in a modified version of the Mk.5P (alternative designation FV 4030 / 1). They had an old power plant, peculiar to the original modification of the Mk.5, but they were equipped with a new transmission control system, enhanced mine protection and additional shock absorbers on the rear support rollers. Also slightly changed the design of the fuel tanks and some other units. 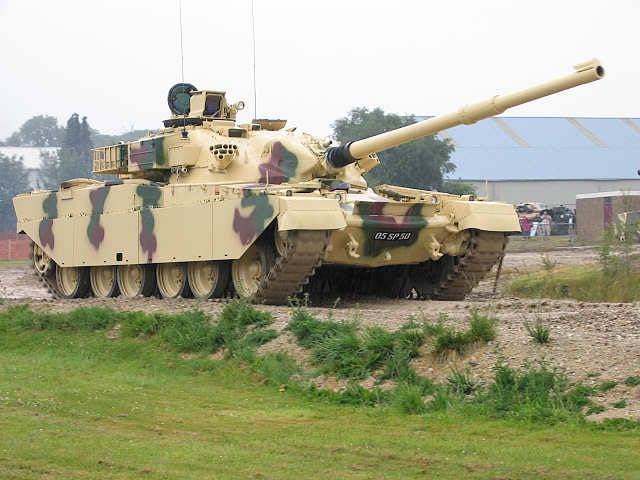 The 125 tanks from the next batch already carried a new name: Shir-1 (FV 4030 / 2). They received a new enhanced suspension and updated hydromechanical transmission. However, the CV-12TCA diesel engine was still not ready and had to do with the engines of acceptable power available at that time. According to various sources, the Shir-1 tanks were equipped with HP 850-900 diesel engines. The update of the protection and combat module was postponed for the next modification.

For tanks Shir-2 (FV 4030 / 3) developed an updated armored hull and a welded turret. An interesting innovation in the design was the use of combined armor Chobham. In addition to the remaining former weapons of the tank, the use of a new fire control system was included, which included a combined day / night periscope sight, etc. Components. The tank "Shir-2" used a new hydropneumatic suspension, created by Dunlop. The powerplant with a 1200-strong engine was still at the testing stage.

Unfortunately for the Iranian army, the British managed to build only seven prototypes of the Shir-2 tank. The design and testing of this armored vehicle lasted until the 1979 year. After the Islamic revolution, the new government of Iran severed the contract for the supply of British tanks. As a result, the armed forces of the Middle Eastern state managed to get only 700 tanks of several modifications. The project "Shir-2" was closed as unnecessary, but some developments on it were subsequently used in other developments.

In the mid-seventies, Jordan showed its interest in British tanks "Chieftain". Contract negotiations were delayed until the end of the decade, but in the end, countries managed to find a common language and determine the appearance of the tank needed by Jordan. A promising tank for this country was named Khalid and the index FV 4030P2J. 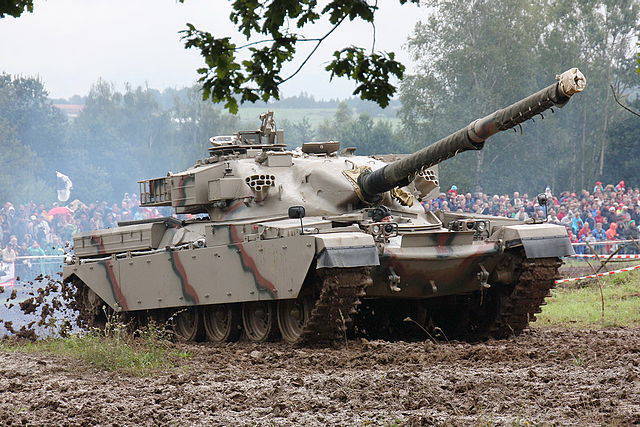 In fact, Khalid was a small upgrade to the Shir-1 tank. Minor improvements underwent hull design, since the armored vehicle received a new engine. After several years of operation, the tank of the Chieftain family finally received a diesel engine with an output of 1200 hp. They became the forced version of the engine Perkins CV-12 1000. Also, the TN-37 hydromechanical transmission was completed by this time. In the fighting compartment of the Khaled tank, Markoni Space and Defense have installed a new fire control system. At the same time, despite all the changes in the composition of the equipment, the updated tank apparently almost did not differ from the “Chieftain” in the Mk.5 version. Two armored vehicles distinguished only the location of boxes for equipment on the tower and several other minor details.

In accordance with the first contract of 1979, the UK built and supplied Jordan's 274 tank Khalid. Later, with the efforts of British and Jordanian enterprises, the number of these machines in the armed forces of the Middle Eastern kingdom increased to 350 units.

In the early eighties, the British created a new modification of the tank "Chief", originally intended for export deliveries. The authors of the project from the Vickers company tried to take into account all the wishes of customers that were available at that time and the current trends in the area of ​​main battle tanks. As a result, a project called Chieftain-800 / 900. 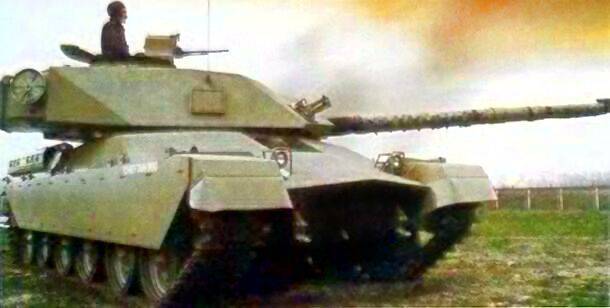 The new tank for third countries was a further development of the line of modifications of the model Mk.5. He received an even more powerful booking of updated corps and towers. Like the Shire-1, the Chieftain-800 / 900 was proposed to be equipped with Chobham combined armor. It is noteworthy that the frontal part of the hull was carried out according to the outdated “pike nose” scheme used on some tanks of the middle of the last century. The prototype of the new “Chieftain”, which was on display at the arms exhibitions, had characteristic lines formed by the mating flat parts. This was probably due to the extensive use of combined multi-layer armor.

After upgrading the hull and turret, the tank became heavyweight up to 56 tons, so a fairly powerful power plant was needed. Customers were offered two versions of the tank, differing from each other in diesel engine power. So, on the "Chiften-800" it was supposed to install an 800-strong diesel, and on the "Chiften-900" - an 900 hp engine. In both cases, the supplier of the engine was the company Rolls-Royce. To simplify and reduce the cost of construction, export tanks had a mechanical TN-12 / 1000 transmission, the same for both variants. The tank was equipped with an auxiliary engine power 30 hp, associated with an electric generator. The auxiliary engine and the generator were supposed to supply the combat vehicle with electric power when the main diesel engine was turned off. Armament and electronic equipment matched tank Chieftain Mk.5. 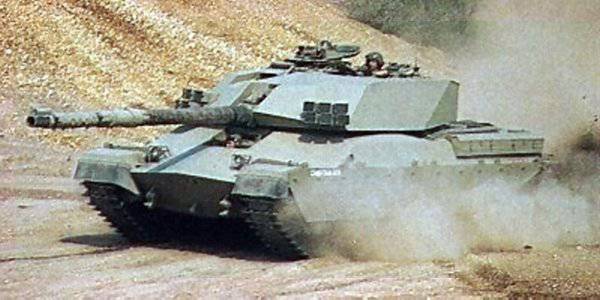 The first OBT Chieftain-800 / 900 was shown in 1982 year, after which for several years it was shown at international exhibitions of weapons and military equipment. However, the idea of ​​British tank builders did not lead to the expected result. The tank, designed specifically for export deliveries, only attracted the attention of potential buyers. Foreign military limited praise and did not rush to initiate negotiations on the supply. Probably, potential buyers were repelled by the insufficient driving performance of an armored vehicle, which, with an 900-strong engine, could only accelerate to 52 km / h, and only on the highway. Anyway, in the absence of contracts and any prospects, the project Chieftain-800 / 900 was closed in the mid-eighties. The only prototype built is currently stored in the tank museum of the city of Bovington.