Will trillions make the Russian army the strongest in the world?

January 19 2011
5
So far, the Chinese are testing the latest aircraft, and the British are releasing from the assembly line Tanks-invisible, Russia is conducting a massive military reform. Recently, Prime Minister Vladimir Putin promised trillions to modernize the army, but this “scary” money, he said, will have a tangible effect no earlier than 2015. However, experts believe that there is no reason to panic, because in the end, the Russian armed forces will become the strongest in the world and will be able to win any military confrontation in a maximum of two weeks.

Vladimir Putin’s December trip to Severodvinsk and his statement that Russia will spend more than 2020 trillion rubles on armaments by 20 are certainly encouraging. Indeed, according to the prime minister, by 2015, thanks to the new state program, the share of modern weapons in the troops will increase by a third, and by 2020 will reach 70 percent. Concerning fleet, then about 4,7 trillion rubles will be allocated for its development. "It is necessary to pay special attention to the creation of a group of fourth-generation nuclear strategic nuclear forces, the purchase of modern surface ships, the repair and modernization of existing equipment, as well as the updating and strengthening of the material and technical base," said Vladimir Putin. 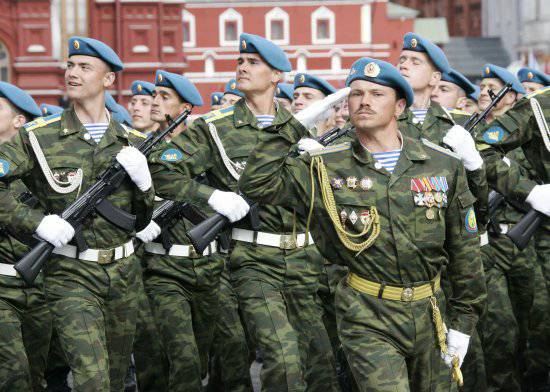 In the ranks of the experts, however, there was not particularly optimism about the voiced figures. On the one hand, the army has long been in need of reform, but, given the corruption and the deplorable state of the domestic military-industrial complex, not everyone believed in the success of such global transformations. As some experts say, all three rearmament programs that were outlined earlier were failed, therefore, the special illusions that the “four” figure would be happy should not be fed.

But there are those who believe that in the near future things in the Russian army will go well. Among them is Ruslan Pukhov, a member of the public council at the Ministry of Defense of the Russian Federation, head of the Center for Analysis of Strategies and Technologies (CAST). According to him, after the reform, the armed forces of the country will be able to win in any military conflict in a maximum of two weeks. “At present, the Russian army is in second place after the United States in terms of its military potential weapons and the third place after the USA and China without nuclear weapons ", - quotes him RIA News. The expert believes that the first stage of reforming the Russian army has already been completed, and from the beginning of this year a new period of reorganization begins. “It will consist in transferring to the new structure of the Ground Forces, reforming the Air Force and transition to the new look of the Navy,” noted Pukhov, adding that the results of the entire military reform in Russia could be summed up in that very 2015 year.
Without going into a discussion of perspectives, with one hundred percent certainty, one thing can be said: Russia really does have potential. The same export of almost all weapons and multimillion-dollar contracts is an important indicator. Yes, the military-industrial complex is experiencing certain difficulties, but, you see, Russia was and remains the country that always surprised the world with novelties. Whatever fighters China may have experienced, no matter how great Britain used to be stealth tanks, we already have all these developments. It remains only to equip their own army that goes to partners. About this, by the way, President Dmitry Medvedev spoke in November. The Russian leader then stressed that even budget programs are being cut for retooling. And he added that the armed forces are not a closed corporation.
Cost control is another important issue that concerns the authorities, the expert community, and the media. It was not for nothing that in April last year, a special unit was created to fight corruption in the Defense Ministry of the Russian Federation - the financial inspectorate. In Severodvinsk, Vladimir Putin explained to those who were particularly dull - now the rate of supply of new weapons will be controlled. And this, in turn, means that the military department in the long term will give state orders only to those defense companies that have already modernized production and are able to perform the assigned tasks. Accordingly, the money will go to the enterprises after its conversion, and not before.

It is hard to say now whether rearmament will pass under the plan of Putin and Medvedev. There are problems, but perhaps falling into depression is not the best solution. In the end, there is time, and most importantly, serious means of getting rid of careless officials and putting military factories in order.