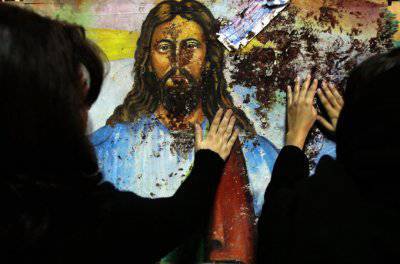 Roberto de Mattei - a famous Catholic figure, historian, the other day promulgated an extensive article on the website "Correspondance Européenne", which immediately went around the entire western Internet. Reviews of the article appeared in RuNet. According to the scientist, the rights of Christians, as before, are violated, and this is happening "around the world." Everywhere - in the Middle East, in countries in Africa and Asia - there are "systematic" attacks on Christian communities. And the number of such attacks is increasing day by day.


Not so long ago, 27 May, Archbishop Silvano Tomazi (Vatican Permanent Observer to the UN), speaking in front of the Human Rights Council in Geneva, brought irrefutable evidence that more than 100.000 Christians die every year for one reason or another connected with their faith. They are killed.

Earlier, at 23 in May, at the OSCE conference, Austrian scholar Gudrun Kugler in her report gave examples of how the freedom of religion of Christians in Europe is limited.

Christians today cannot express their opinions — for example, against homosexuality, same-sex “marriages” registered by municipal officials, or abortions. And we are talking about those cases where believers do not refer to the Bible. The language of Christians is interpreted as "hostile."

2 June in the Italian newspaper “Corriere del Sera” Ernesto Galli della Loggia gave an accurate description of the situation. According to the journalist, the current "coup" in Europe is happening "silently." Della Loggia calls this happening a “revolution in mentality and collective morality,” which marks a “break with the past.” The author calls this gap the "anti-religious revolution." What it is? This revolution affects any religious factor - as such, regardless of the main religion, historically established in the country. And if we are talking about Europe, the journalist writes, the coup has essentially the appearance of an "anti-Christian revolution."

Galli della Loggia cites a number of examples, partly made up of detailed complaints published in the Avvenire newspaper (edition of the Italian Bishops Conference). Here are a few of his examples.

In Ireland, churches are forced to conduct same-sex ceremonies.

In Denmark, the parliament has already approved a law according to which the Evangelical Lutheran Church should enter into homosexual "marriages", despite the fact that a third of the ministers declared the law unconstitutional.

In England, the nurse was forbidden to wear a cross around his neck while serving. In the same country, a small printing house was held accountable for its refusal to publish sexually explicit material - commissioned by a gay magazine.

In France, according to the law, Christians do not have the right to publicly assert that sexual relations between people of the same sex are sin in accordance with their religion.

In Europe, a lot of things are being done to ban the so-called “discriminatory practices”. For example, in other schools, the word Christmas is prohibited and replaced by the “neutral” term “winter holiday”.

In the current year, writes Mattei, 1700 is celebrated for the Milanese Edict. One thousand seven hundred years ago, Emperor Constantine gave complete freedom to Christians - after three centuries of persecution. The Christian civilization of the West was born. And today, seventeen centuries after the "turning" of Constantine, the scientist notes, we are trying to protect the social space of Christianity from the attacks of new persecutors.

8 June, unidentified persons abused one of the main monuments of France - the Cathedral of Saints Peter and Paul in Nantes. This was reported by the channel "NTV" with reference to ITAR-TASS.

Hooligans spoiled the interior of the temple, causing damage to the choir and the altar. According to witnesses, the vandals outraged the statues. Inscriptions were made on the wall of the cathedral. Christian de Laverne, Prefect of the Department of the Atlantic Loire, says: “The inscriptions are mixed: several“ devil numbers ”are 666, Nazi slogans, inscriptions in the style of the“ Femen ”movement and human figures similar to those that use the movement against same-sex marriages”.

Earlier, on the night of June 7, unknown persons desecrated St. Stephen’s Cathedral in Limoges, the portal reports Regions.ru with reference to the "Week".

On the walls of the church, the vandals left inscriptions: “ecclesiastical right = Sharia”, “For Clement killed by brown plague” (a hint of a member of the radical leftist group Clement Merik killed by skinheads in Paris 5 June). The following inscription (“D. Venner, see you in hell”) is a reference to the recent suicide of the French writer Dominique Venner in the Cathedral of Notre-Dame de Paris, an opponent of homosexuals and same-sex “marriages”.

On May 31, unknown persons desecrated the Benedictine Temple of the Assumption of the Blessed Virgin in Jerusalem. The attackers caused insulting graffiti and punctured the tires of parked cars, reports "Euronews".

"Lenta.ru" with reference to "Yediot Ahronot" cites the contents of some inscriptions (made in Hebrew): "Christians are monkeys" and "Christians are slaves." On the wall of the church was also written "tag mehir" (translated into Russian - "price tag"). This appeal is used by Israeli extremists who oppose the policies of the Israeli government, which they consider to be pro-Palestinian.

More than once there have been reports of the desecration and plundering of Christian churches in Syria - militants- “oppositionists”, who in the US say they are fighting for universal human values.

What are these values, we all know. A “same-sex” minority rules the ball in the French parliament, a carter from Washington, Russia for its “homophobia” and intolerance, organizes gay holidays at the CIA and the Pentagon and holds LGBT parades in London. Radical Islamism in Syria, which by no means supports all these same-sex people, nevertheless requires them weapons. Old John McCain, who was photographed on the Turkish-Syrian border with bearded kidnappers and called them “brave fighters”, shakes the US Senate with fiery speeches. Everything was mixed up in the Oblonskys' house! Probably Prokhanov is right when he said recently: “We are now ... are present at the process of creating a world dictatorship of homosexuals.”

Observed and commented on Oleg Chuvakin
- especially for topwar.ru
Ctrl Enter
Noticed oshЫbku Highlight text and press. Ctrl + Enter
We are
Heavenly patron of the Bulgarian-Russian friendshipGenocide of Christians in the Middle East. Millions of people have become a bargaining chip for American geopolitics
128 comments
Information
Dear reader, to leave comments on the publication, you must to register.