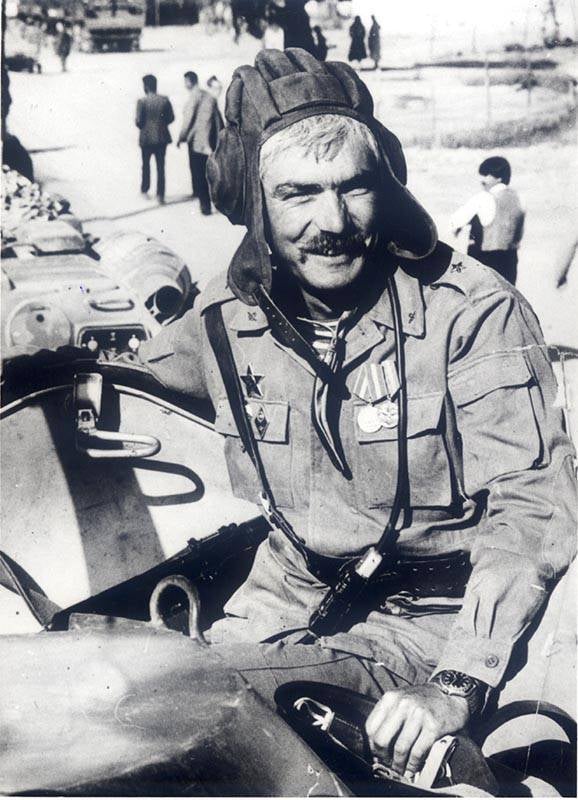 Chief of Staff of the 334 th OOSPN major Vyacheslav Kachura on the BTR-80. Afghanistan "the beginning of the withdrawal of the Soviet troops 1988

The Afghan war, as is commonly believed, was unsuccessful for the USSR. From a political point of view, maybe it is. But with the military everything is completely different. The tasks that the Soviet leadership set before the troops were completed. In addition, our military gained invaluable experience in waging war against irregular armed formations.

Time is implacable. Now, those whose fathers of 27 of December 1979 were already in the army ran an epic called “Afghan war”. It was she who forced the generation of the grandchildren of the soldiers of the Great Patriotic War to plunge again into the crucible of battles, to know the bitterness of defeat and the joy of small victories, the loss of comrades and the devil-may-care attitude of officials to the crippled bodies of "Afghans". It is the bodies that were wounded and crippled by that war, and not the souls that were tempered in it.

The “Afghan war” left its mark not only in the hearts of its participants and the military stories our country, but contributed to the development of weapons and its combat use. Moreover, the practical combat use of those or other samples weapons often went far beyond the scope of its intended purpose or took place in completely unforeseen conditions.

The “Afghan war” officially lasted for 9 years and 51. The 15 ended February 1989 in February with the intersection of the last column of Soviet troops on the Soviet-Afghan border. Unfortunately, over the entire post-Afghan period, we have not managed to draw the necessary political and military lessons from that conflict. In Afghanistan, we did not suffer a military defeat and did not win. We simply paid for the mistakes of politicians, our own and Afghan ones, with tens of thousands of human lives of the peoples of both states. 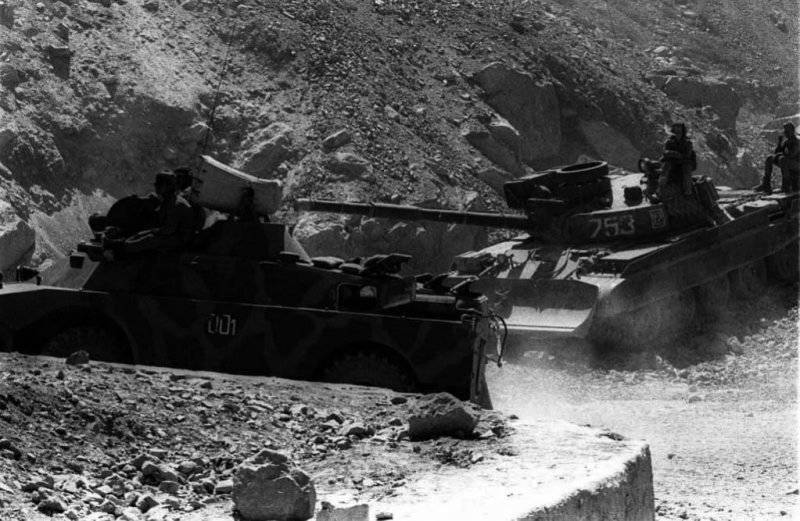 In the foreground is a combat reconnaissance and patrol vehicle BRDM-2 with a sound system. Rear tank T-62M. The additional armored shield of the turret and bulwarks are clearly visible, providing protection against cumulative ammunition from fire. 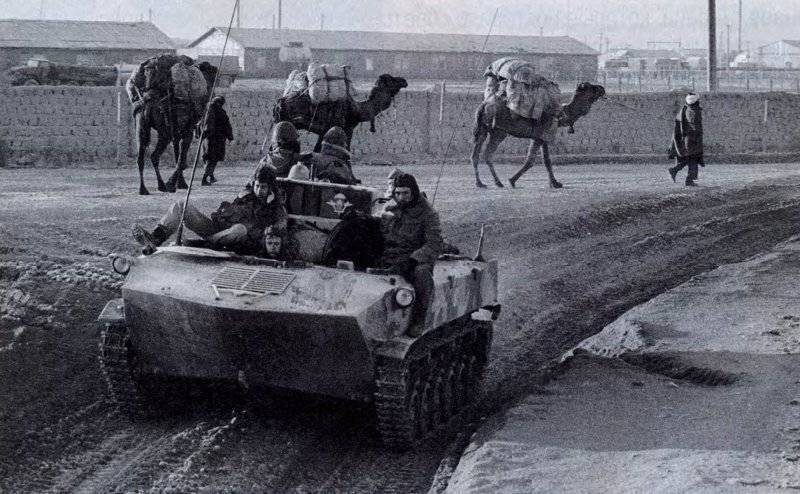 In Afghanistan, a weak survivability of the BMD-1 was revealed when it was detonated in a mine. By the mid-80s. BMD-1 vehicles were replaced by BMD-2D in the paratrooper units 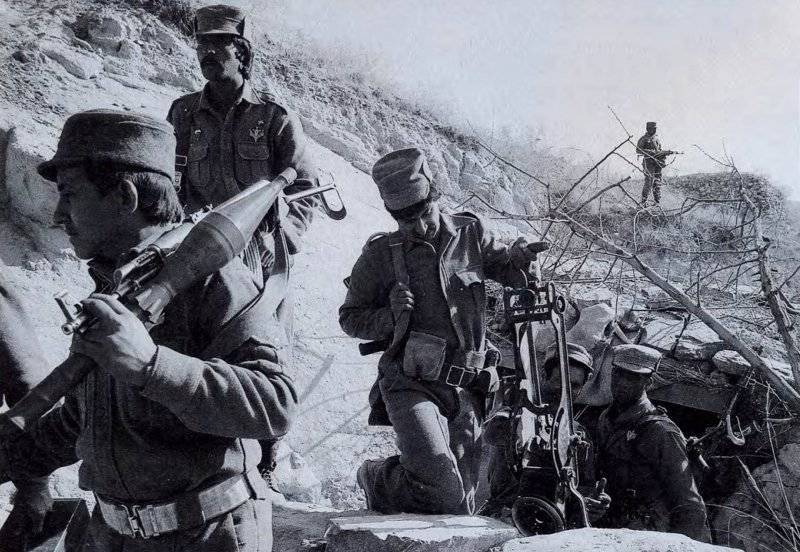 The limited contingent of Soviet troops in Afghanistan became the force with which the leadership of the armed Afghan opposition and their overseas patrons were forced to reckon. Military-technical assistance to the Afghan rebel formations with the introduction of Soviet troops in Afghanistan increased day by day. It was not the flint-guns that the Afghan Mujahideen fought against the Soviet troops, although these guns themselves have been kept in their homes for a long time, because the Afghan society has always been militarized, due to the constant enmity between the tribes. At the beginning of the 80's family flints and borays began to force out the Kalashnikov assault rifle, for the most part Chinese-made - Type "56". But not only the guns were armed rebels. They received portable anti-aircraft missile systems, multiple rocket launchers, mortars, recoilless rifles and grenade launchers, anti-aircraft artillery and machine gun installations, various small arms, anti-tank and anti-personnel mines. All these Afghan "rebels" were generously supplied by their western and eastern patrons. The geography of military-technical assistance provided by the armed Afghan opposition in the 80-ies. last century, covered the entire globe.

Until 1979, the tactics of actions of units and subunits of the Ministry of Defense of the Soviet Union did not provide for military operations against irregular armed formations of the enemy. A similar experience in the struggle of the Red Army with Basmachi in Central Asia, the NKVD and the Ministry of State Security with banditry in Western Ukraine and the Baltic States, which remains relevant in our time, was not reflected in the military manuals and training practices of the USSR Armed Forces. The unpreparedness of army units and subunits to combat irregular formations was compounded by difficult physical and geographical conditions. In the mountains of Afghanistan, mobile operations of infantry units and special forces have gained particular importance. Army special forces proved to be the most effective means of counterinsurgency war in the mountains and deserts of Central Asia. Acting suddenly and decisively, the relatively small reconnaissance groups and special forces inflicted significant damage to the enemy in manpower and weapons. At the same time, scouts used mostly portable means of defeating the enemy and only in individual episodes relied on artillery fire, aviation and armored vehicles. Great experience in the use of various weapons in Afghanistan was gained not only by special forces, but also motorized rifles, paratroopers, artillerymen, sappers, helicopter pilots and other specialists.

Afghanistan has contributed to the acceleration of research and development in the field of weapons. During the “Afghan war” period, the Su-25 attack aircraft, the infantry fighting vehicle BMP-2, 82-mm 2B14 “Tray” mortar and 40-mm Koster grenade launcher developed and adopted by late 25's During the years in which Soviet troops in Afghanistan developed and put into service new types of weapons: 70-mm reactive anti-tank grenades RPG-72,5 (22) and RPG-1981 (26), hand fragmentation grenades RGN and RGO (1985), 1982-mm pistol MSS (7,62) and a knife shooting the NPC-1983 (2), 1986-mm silent machine gun AS "Val" and a sniper rifle BCC "Vintorez" (9), 1987-mm rocket infantry flame-thrower RPO-A "Bumblebee" (officially adopted on armament in 93, but entered Afghanistan from 1988). 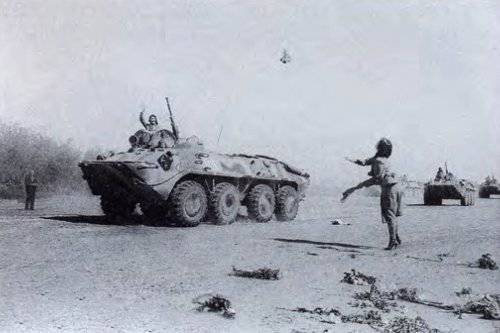 BTR-70 on the march. In areas controlled by Soviet and government Afghan forces, the local population treated them quite friendly. 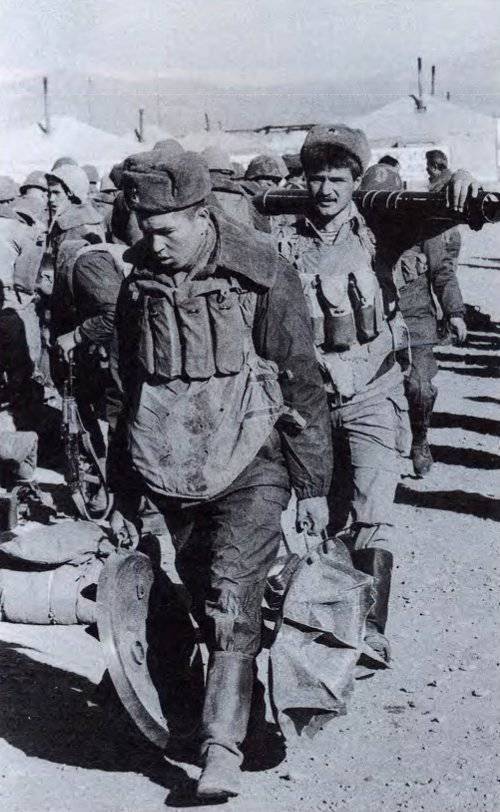 At the beginning of the 80's in the mortar units of OKSV in Afghanistan, the BM-43 mortar (sample 1943) was replaced with the lightweight “Tray” mortar. Mortar calculation 82-mm mortar 2B14 "Tray" consists of four people

Thanks to the Afghan experience, existing weapons were improved and modernized. The experience of the operation and combat use of armored vehicles in Afghanistan demanded enhanced protection of armored objects from the fire of cumulative ammunition and increased the survival of the crew and the landing forces when undermining an anti-tank mine. Additional armor protection appears in infantry fighting vehicles BMP-1D and BMP-2D, BTR-70D, tank T-62M. The armored personnel carriers BTR-70 and BTR-80 in the roof of the airborne compartment appeared loopholes for small arms, allowing the landing to fire with large angles of fire. He received additional armored protection for the cockpit and transport and combat helicopter Mi-8, which increased the survivability of the crew when firing a turntable from small arms.

Combat units of the Soviet troops were significantly superior to the irregular formations of the Afghan opposition in armament at the expense of armored vehicles, artillery and aircraft. However, during the clashes of the Soviet units with insurgent detachments in the highlands or brilliant green (irrigated valleys), especially when conducting close combat, their weapons were almost the same. The rebels' small arms, consisting of Chinese and Egyptian Kalashnikov assault rifles. 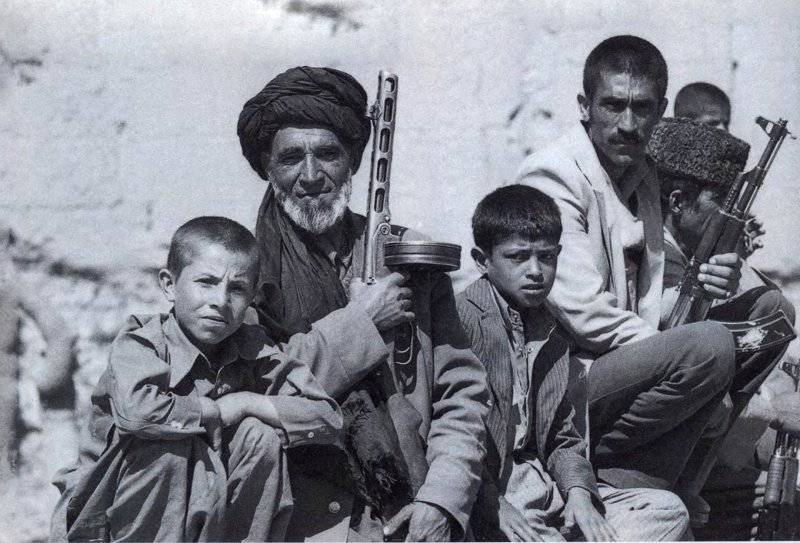 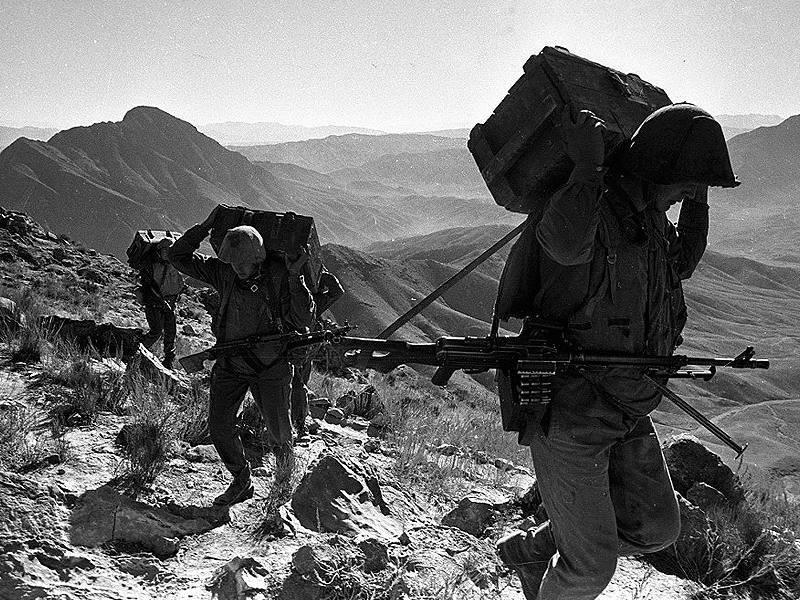 light and heavy machine guns were not inferior to Soviet infantry small arms, represented by AKM and AK-74 machine guns, RPK and RPK-74, PKM and NSVS-12,7 machine guns. As for anti-tank weapons and mortars, it is not uncommon that their ratio was even in favor of the rebels. But no matter how perfect a weapon is, it is used by people. The outcome of the battle was decided not only by weapons, but field training and morale was of no small importance. Soviet units, even in the numerical minority, were much more likely to emerge victorious than their adversary. Years after the withdrawal of the Soviet troops from Afghanistan, the former Afghan Mujahideen respectfully speak of how the Shuravi fought against them (the Soviet - Dari). With the rare exception of units and units of the Limited contingent, they successfully carried out all the tasks set by the command. But to win a war in Afghanistan by military action alone was impossible. The war in Afghanistan was lost not by the military, but by the political leadership of the Soviet Union. The military has an expression - as the task is set, so it is executed. The task of defeating the Afghan rebel formations before the OCRC in Afghanistan did not stand, and the "military assistance" concept is inert and not concrete. Example of OXV in Afghanistan in 1979-1989 did not serve as a lesson for practical Yankees. ISAF, led by the United States and the NATO command, were unable to control the internal political processes in Afghanistan by the international security assistance forces in Afghanistan. For the current leaders of the Afghan Mujahideen, the fight against foreign occupation was only a pretext for reprisals against internal enemies. The installation on building a “democratic society” in Afghanistan, in its Western sense, was lowered by “Uncle Sam” and only contributed to a new round of Islamic fundamentalism in the region. 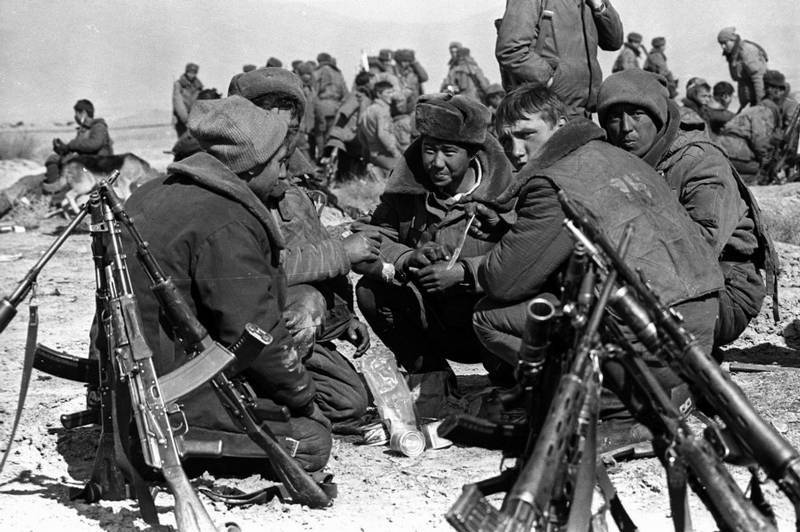 Soviet infantry on a halt. In the foreground, the main weapon of the infantry is the 5,45-mm machine gun AK-74 7,62-mm sniper rifle SVD AND 40-mm grenade launcher GP-25. Afghanistan, February 1989 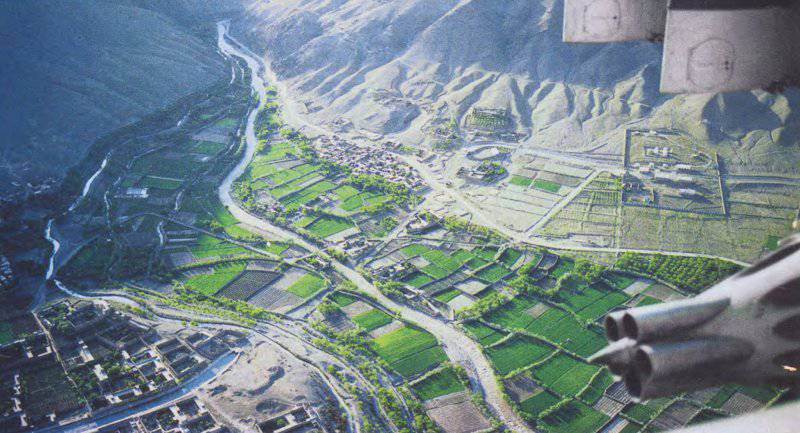 Afghan "green". View of the Mi-8 helicopter in the lower right corner of the block of unguided C-5 aircraft 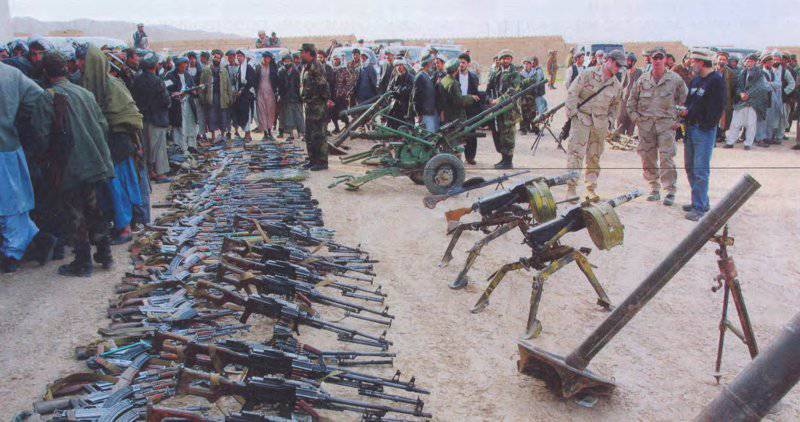 Modern Afghanistan remains the refuge of religious extremists and the main drug exporter to the post-Soviet states and Europe.

Now is the time for Russia to comprehend all the lessons of the “Afghan war.” Wars justified in the context of the political events of twenty seven years old and modern. But not justified by the loss of our compatriots 14333, worthy of the memory and gratitude of the descendants. 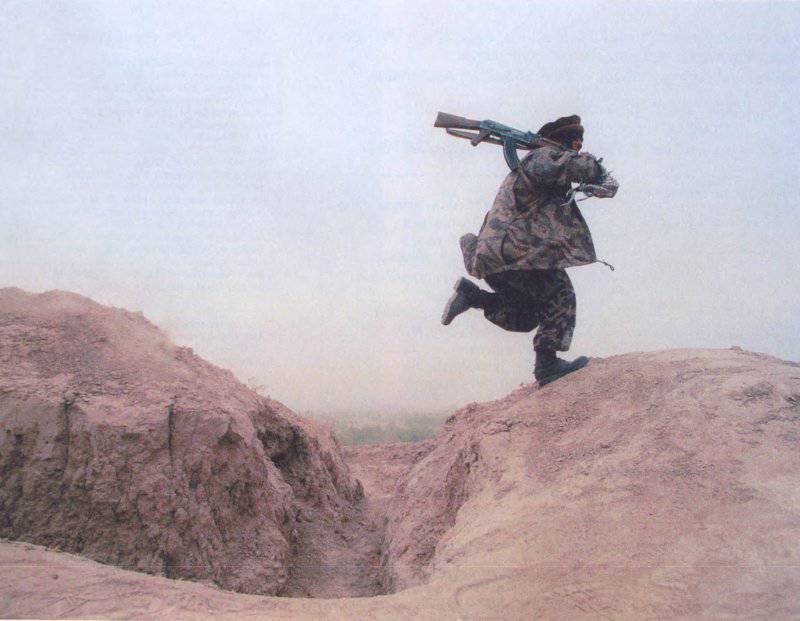 The main way of carrying the AK machine, practiced by the Afghans, is on the shoulder with the weapon held by the barrel. 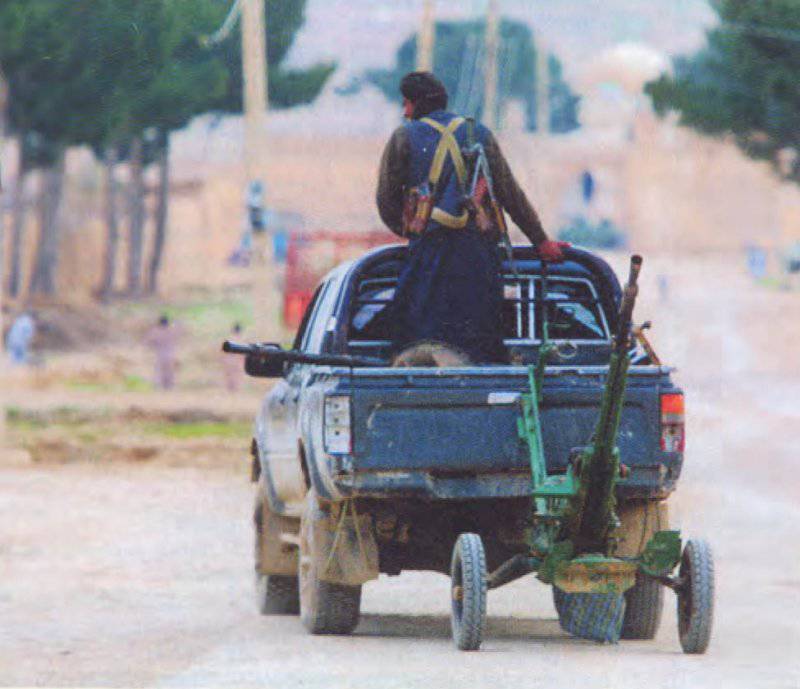 The 14,5-Mm anti-aircraft installations ZSU-1 (Type "76-1", PRC) were the main means of air defense of the Afghan insurgents in the 80-s. Transportation ZSU-1 pickup. If necessary, the anti-aircraft gun can be broken apart and transported by calculation from 5-7 people or transported by 2-3 to pack animals.

Author:
Alexander Musienko, a lieutenant colonel in the reserve, a veteran of the Afghan war
Photos used:
at registration of a material pictures of photojournalists are used. Maksimishin, V. Svartsevich, V. Khabarov, M. Marmur, A. Sekretaryova, and L. Yakutin

Ctrl Enter
Noticed oshЫbku Highlight text and press. Ctrl + Enter
We are
Diplomats of the People's Commissariat of Defense: on the eve and during the warChronicle of the "Afghan war." "Stinger" against helicopters: special forces against "Stinger"
Military Reviewin Yandex News
Military Reviewin Google News
32 comments
Information
Dear reader, to leave comments on the publication, you must to register.