July 15 2013
8
The 1930s marked the beginning of the race among the designers of the bombers. Everyone tried to create cars with greater speed, bomb load, range. Realizing that the main attacks on the rear and the military-industrial potential of the enemy are capable of only long-range aviation, designers began to create new bombers. At the same time, they tried to bring their design to perfection. 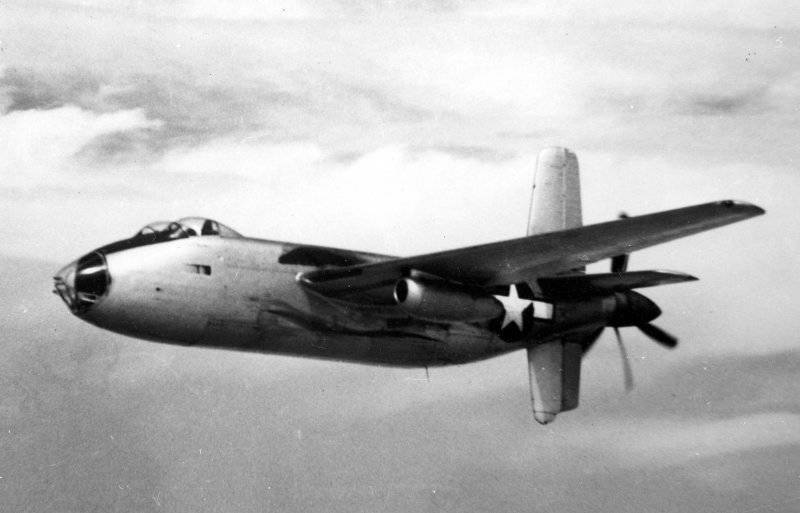 A breakthrough in the flight performance of the bombers, in particular in speed and range, was only possible through the use of a new layout scheme and a decrease in drag. These works were carried out in many countries.

As part of the creation of a new bomber by the American company Douglas, an experimental XB-42 Mixmaster bomber was developed, capable of carrying out bombing at high speed.

A sketch design of a Douglas medium bomber (Santa Monica) proposed the US Air Force in 1943 year. The new bomber optimally combined the classic features and elements of novelty. This aircraft had two engines placed in the fuselage and rotating coaxial screws in the tail of the fuselage by means of long shafts. Under the engine compartment housed a long bomb compartment of large capacity. Cruciform plumage well protected propellers during takeoff / landing. The crew of the XB-42 Mixmaster bomber consisted of three people: two pilots and a navigator-bombardier.

It should be noted that the design of the aircraft did not have any fundamentally new materials and technologies for 1943, the development of which could delay the transfer of the aircraft to the series. However, the construction, refinement and testing of the aircraft required a lot of time, and this was the reason that the brainchild of Douglas did not go into series. 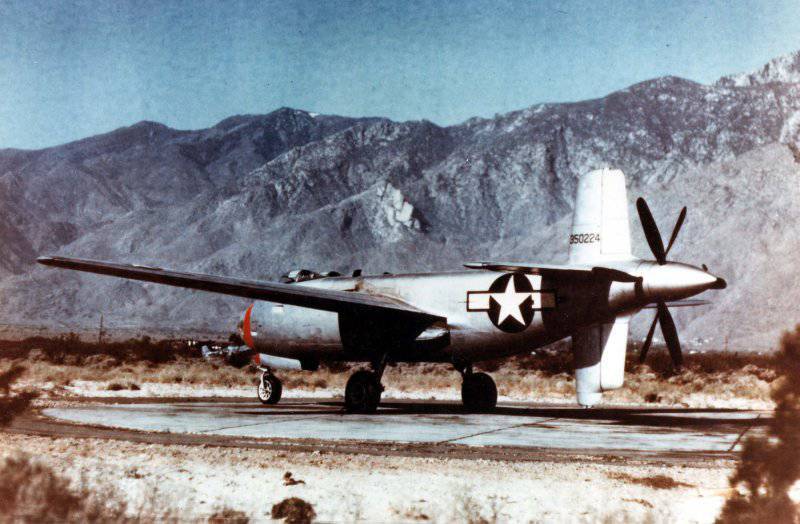 The air force became interested in such an aircraft and in May 1943 of the year signed a contract for two prototypes. Aircraft assigned name XA-42 "Mixmaster" ("Mixing cocktails"). Most likely, such a proper name was due to screws of opposite rotation. At the beginning of 1944, when it became clear that strategic and tactical bomb strikes would become the main purpose of the Mixmaster, the “assault” designation XA was replaced by the “bombing” XB.

The first prototype for flight testing was ready in May 1944. The plane turned out beautiful and elegant. The cockpit had a very original layout: the commander and co-pilot had two drop-like symmetrically arranged individual lights. The lanterns looked like frog eyes, so the XB-42 quickly gave the nickname “flying frog”. If necessary, the pilots could change places during the flight, the layout allowed to move from one cabin to another without any inconvenience. Ahead was the navigator-bombardier, covered with a nose plexiglass blister.

The XB-42 bomber was equipped with the Allison V-1710-125 tandem-row liquid-cooled liquid-cooled engines. The power of each was 1725 hp The maximum speed was estimated at 690-700 km / h, which for 1943 of the year was a fantastic indicator. Such an incredible speed for an average bomber was achieved by maximally licking the fuselage, refining the aerodynamics and using a laminar wing. The range of the new bomber exceeded the range of the last serial B-17. 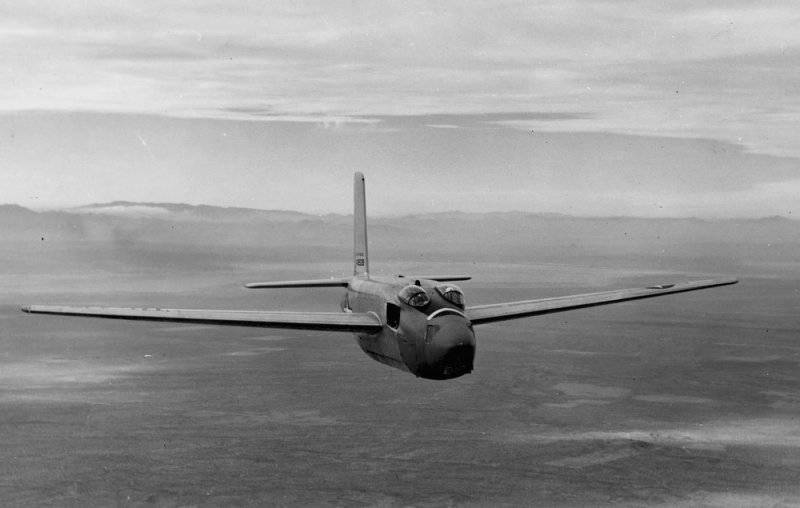 The main problem for designers was the transmission of torque to the screws from the engines. Douglas company experts have studied the experience of Bell, acquired during the creation of "Air Cobra". As a result, it was decided to use for connecting engines with propellers with a long shaft, which consisted of five sections - shafts from P-39. The torque was transmitted to a large planetary gearbox located in the tail area. Two concentric shafts of opposite rotation emerged from the gearbox, which set in motion two Curtiss Electric 4-meter three-bladed propellers. The system was not very elegant and rather weighted, however, these shortcomings were compensated by improved flight performance. To safely leave the plane in the air, provided a system for shooting screws.

The wing was arranged very tightly: in its root were located the air intakes of the engines and the cooling system. Further from the fuselage, next to the air intakes, were machine-gun barbets and cartridge boxes. The rest of the wing volume was taken up by the protected fuel tanks.

Since the wing was thin (it was made to reduce drag), the aircraft’s landing gear was retracted to the back of the fuselage, where there was enough space — there were only two relatively small tanks, glycol and oil, behind the bomb bay.

Due to its flight characteristics, the aircraft was supposed to lift up to 3,6 tons of bombs - as many B-17A’s first “flying fortress” could carry. At the same time, a large and long bomb bay made it possible to receive British 1,8-ton and 3,6-ton bombs of increased power.

For mass production it was supposed to use a modular design of the bow. Instead of the navigator's cab, batteries could be installed from 8-12 machine guns (caliber 12,7 mm). 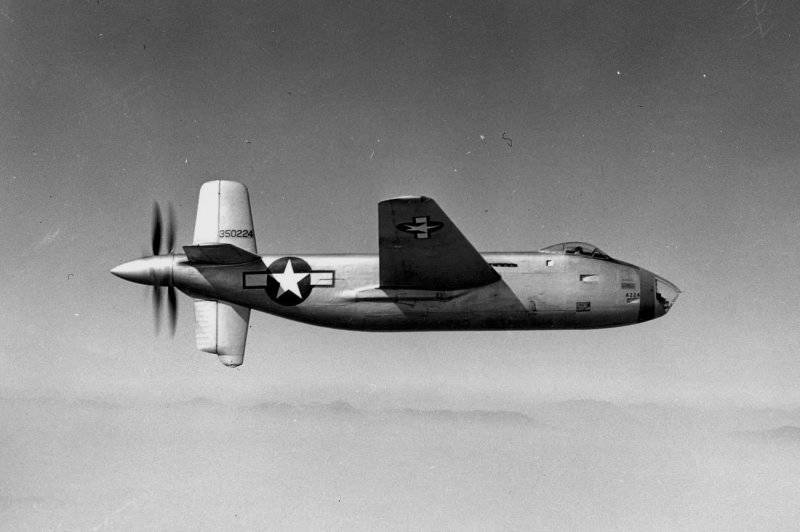 Despite the fact that the new aircraft had a high speed of flight, and few fighters could catch up with it, the armed specialists decided to abandon the defense of the rear hemisphere. However, it was impossible to place defensive armament in the fuselage - there was no free space and the screws blocked the firing sector. Therefore, in the wing between the flap and the aileron, placed twin machine gun. Machine-gun barbets, almost completely hidden in the wing, in the marching position almost did not create resistance. Cartridge boxes were also placed in the wing. Aiming was carried out remotely, one of the pilots could fire, for which his chair turned to 180 degrees.

The first flight of the "Mixmasters" took place at the Wright-Field 6 air base in May 1944. During the flight tests, the prototype flew around 150 hours, after it was handed over to the customer. In July, they prepared a second prototype, which differed from the first one with a general cab light.

The program XB-42 kept in strict confidence. The aircraft was shown to the public in September 1945, a month after the end of the war. By this time it was already clear that the plane would not go into the series. The first prototype was converted into a flying laboratory for testing jet engines XXXUMB-19 "Westinghouse" (in the series received the name J2). These two small engines (kgn xnum) were mounted under the Mixmaster's wing. 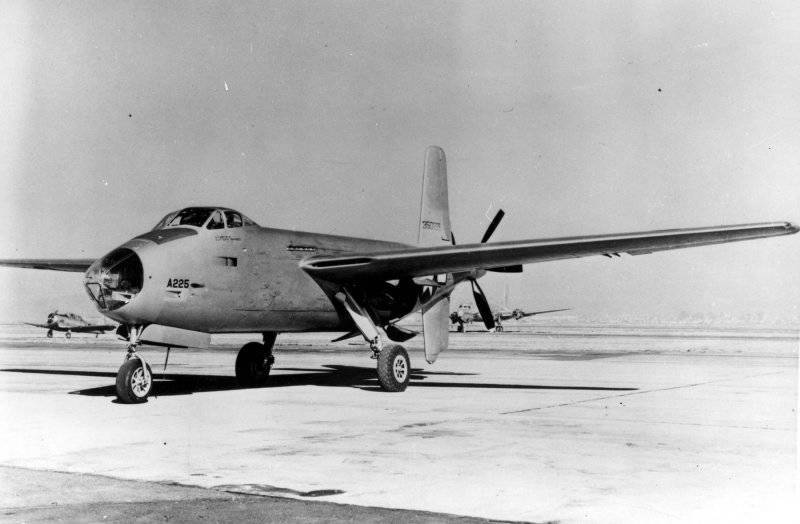 The second prototype XB-42 8 December 1945 of the year made a record transcontinental flight in 3790 km from Long Beach (California) to Bolling Field (Columbia). The distance was covered in 5 h 17 min. The average speed was 717,8 km / h. Unfortunately, a few days later, on December 16, an aircraft that took off from Bolling Field refused the engine and the crew had to flee by parachute. The screws were pre-shot. The plane crashed in Maryland near the city of Oxen-Hild. An accidental eyewitness reported the accident to a local newspaper. After that, the process appeared statements that the disaster occurred due to the fact that the plane fell off the engine. Probably thus interpreted the shooting of screws.

In 1946, the first prototype crashed during the landing. The cause of the accident was probably a high landing speed inherent in aircraft with a laminar wing.

In parallel with the development of the bomber, the Douglas Company was engaged in the passenger version of the "Mixmasters" - DC-8 "Skybass" aircraft. This car was supposed to have an unheard of passenger capacity for those times - 48 people. Unfortunately, the development was stopped at the stage of an advanced project.

After the end of the XB-42 program, Douglas continued its line. On its basis, developed and built a plane with jet engines. This machine was assigned an index XB-43. It was equipped with two engines of General Electric TG-180 (thrust 2000 kgf), which were subsequently mass-produced by Allison under the designation J35. The engine was thinner and longer than the piston predecessor, so they were installed side by side in an enlarged engine compartment. 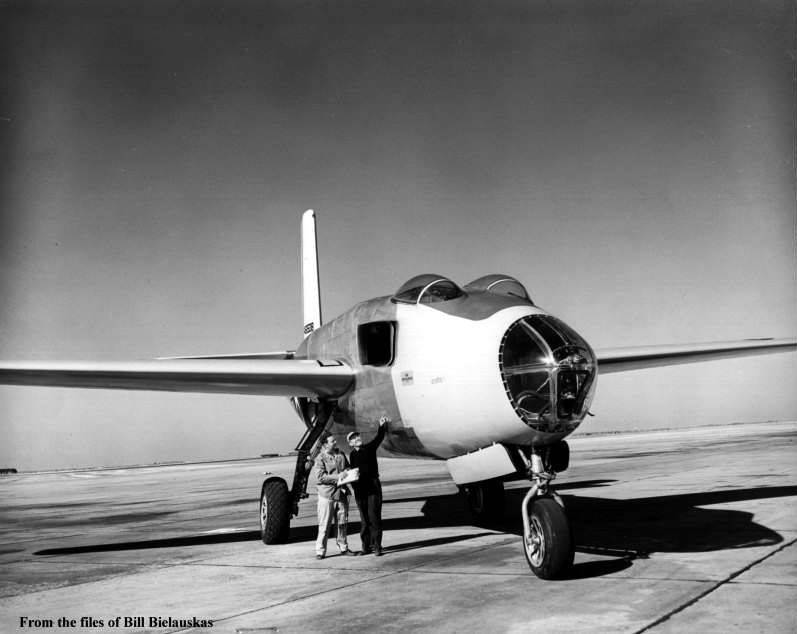 The air intakes are rectangular in shape in the cockpit area on the sides of the upper fuselage. They were made flush with the trim. The inner wall of the air intake had a plate that cut off the boundary layer. Radically remade tail. It contained jet tubes of engines, as well as weight balancers, compensating for the weight of the reduced tail unit. Completely abandoned the lower keel and slightly increased the area of ​​the upper keel. In contrast, the XB-42 new aircraft had a sealed cockpit and improved on-board equipment. By car, there was no defensive weapons. 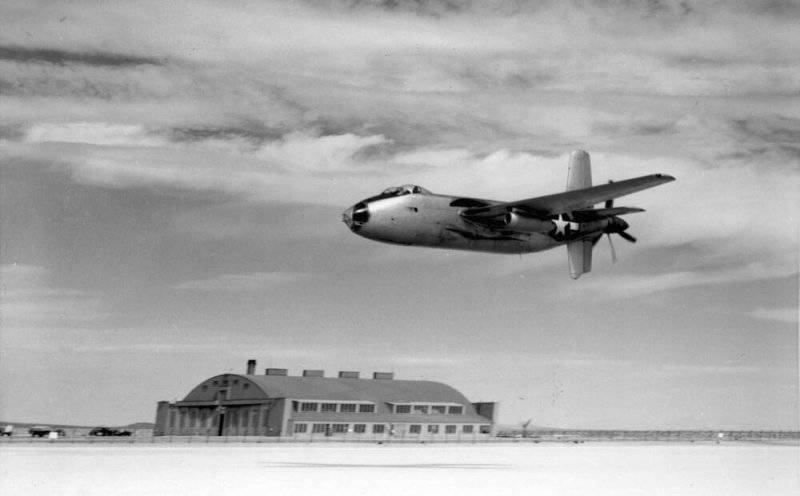 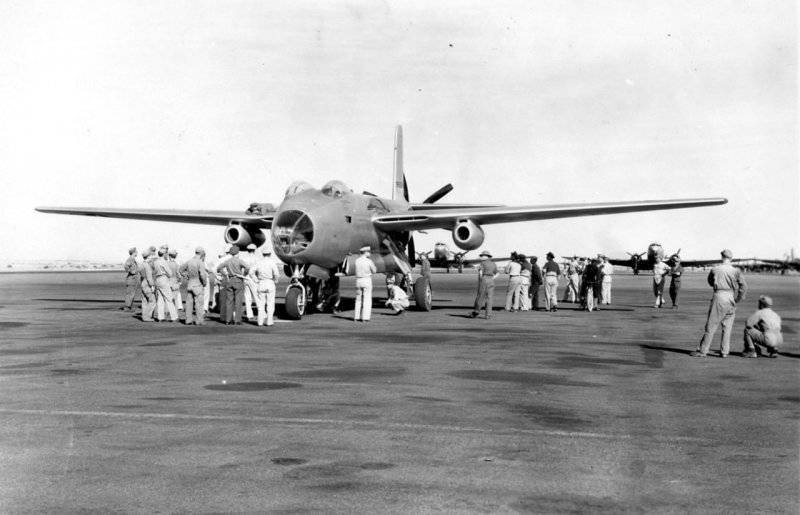 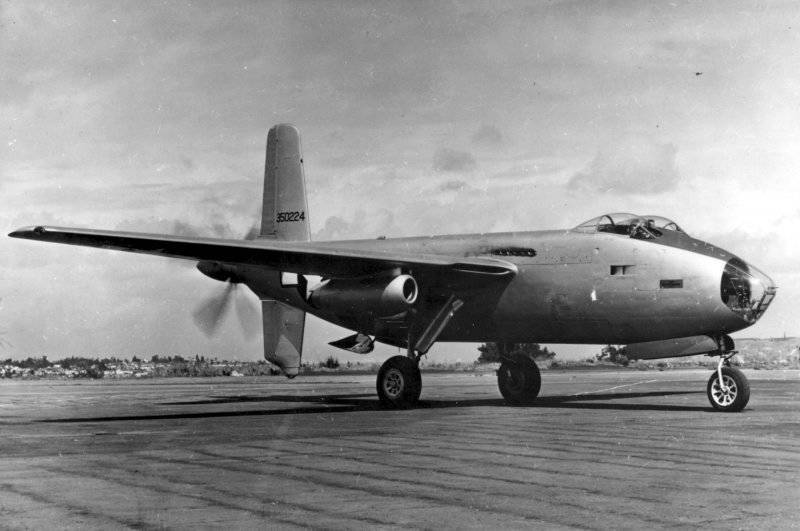