July 15 2013
40
Since the end of last week, we have no secrets related to hydrocarbon reserves. It would seem, why reveal your cards to those who are accustomed to cheat? But in the current situation it was much more effective to open up. Why? Everything in order. 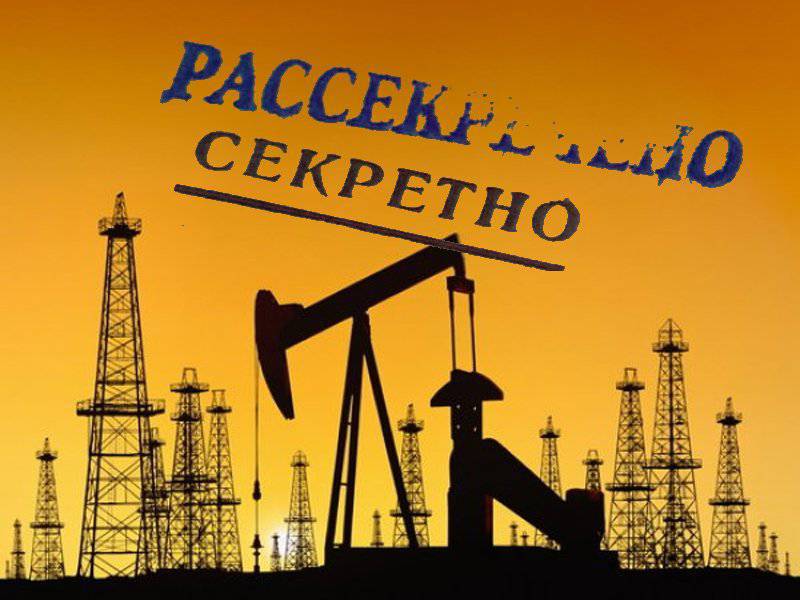 After the Prime Minister Dmitry Medvedev signed the decree on removing secrecy from information about what hydrocarbon resources Russia possesses, the Ministry of Natural Resources provided information on state reserves of oil and natural gas dissolved in oil.

The data of the Ministry of Natural Resources are as follows: oil reserves in the C1 category are 17,8 billion tons, in the C2 category - 10,2 billion tons. Gas reserves by category С1 are 48,8 trillion cubic meters, by category С2 is 19,6 trillions cubic meters. To begin with, we will clarify the main difference between the presented categories.

The C2 category corresponds to: a) identified deposits in the intermediate and upstream drilling formations at the explored or developed site, b) deposits in untested formations of individual domes of multi-domed sites.

The Minister of Natural Resources, Sergey Donskoy, even before the data on hydrocarbon reserves in Russia were declassified on the basis of a government decree approved by President Putin, declaring that declassification would give a significant impetus to investment in the Russian economy, and would also lead Russia to from the first places in terms of ownership of oil and gas.

The average Russian may not understand what it means to “lead Russia to one of the first places in terms of ownership of hydrocarbon volumes.” Are we not in the first positions?

So the fact of the matter is that lately everyone who is not lazy has been engaged in assessing hydrocarbon reserves in Russia, building their conclusions, if not from scratch, then definitely on dubious arguments. Foreign appraisers unanimously claimed that Russian mineral resources are not as complete as Moscow claims. BP, which announced that Russia had moved to second place in the world in terms of natural gas reserves and as much as eighth place in oil reserves, succeeded more than others in assessing the state of Russian hydrocarbon resources. On the basis of what theoretical and practical calculations the experts from British Petroleum conducted their research, it is not known, and it’s just not realistic to imagine that these studies could be carried out objectively in relation to Russia. It is obvious that the published rating from BP "fall" of Russia has a misinformation nature, the purpose of which is quite understandable. This goal is to pull investors away from projects to develop deposits in Russia and to deprive the Russian economy of a substantial percentage of profits.

International economic agencies have indeed recorded a decline in investment activity in the Russian hydrocarbons market after the publication of a “study” conducted by BP. And if it were not for the decision to “open up” the curtain of real Russian oil and gas reserves, then the country's economy would continue to receive less money from the hydrocarbon sector, with all the consequences. And there are a lot of issues, considering that the Russian financial system is still tightly linked to the prices of oil and gas.

As soon as the data from the Russian Ministry of Natural Resources became publicly available, the price profile on the hydrocarbon market shifted to the side, which today is beneficial for the Russian budget. For the first time in the past few months, prices for a barrel of “black gold” approached the 110 dollars mark. At the same time, several long-term contracts for the development of offshore fields were concluded. For obvious reasons, such a situation was not included in the plans of Western "partners" whose financial interests were trying with all their might and trying to defend the information (or rather, disinformation) service of BP.

It should be noted that the Russian Government has declassified data on hydrocarbon reserves, which (data) correspond to the figures for January 2012. Meanwhile, over the past year and a half, significant progress has been made in the area of ​​effective exploration financing, which led to the discovery of several large oil and gas fields, the development of which will be significantly cheaper than the development of deposits discovered at the same time, for example, in Canada. By the way, the publication of declassified data led Russia from the 8-th place (according to BP) to the third place in the world in terms of proven oil reserves. Only Venezuela and Saudi Arabia remained ahead. Data on proven gas reserves again allowed Russia to gain a confident first position in the world. The same BP, according to its ingenious calculations, not so long ago gave Russia second place in gas reserves, putting Iran in first place, for which the world's "democratizers" continue to have far-reaching plans.

Now we will touch the question accompanying the accepted resolution. And is it necessary to reveal all the cards in front of our Western "friends", or is it enough to show the trump ace, and on what? An unequivocal answer to this question is very difficult to give. There are several difficulties here. First, we will not be so naive as to think that the Ministry of Natural Resources has received a distribution list to announce Russian hydrocarbon reserves to the nearest barrel of oil and a cubic meter of gas. Secondly, in the “declassification” itself there are many variants of which side to declassify, and which side to hold under the said neck. You just need to not give a reason for competitors to relax, and for this all means are good. Well, if BP has a tendency to explicitly juggling facts to solve its own problems, then why should Russian companies not go the same way ...

And this path consists not only in, let's say, flexible lifting of the “secret” heading from the volumes of Russian hydrocarbon deposits, but also in possible “estimates” of reserves in other countries. You can, for example, “estimate” gas reserves in Qatar, by announcing that the country is on the verge of a gas crisis. They will understand for a long time, but during this time you can try to lure investors from the Qatari market to your side, provide data about cloudless prospects on the Russian market ... Investors are superstitious people - it’s enough noise to redirect their capital to places they don’t have time to respond hydrocarbon decline prophets.

In general, the declassification of the volume of reserves of Russian hydrocarbons is hardly worth treating as something smelly. With a reasonable approach in this muddy water (well, or, if you will, oil), with all the words about the removal of secrecy, you can catch a weighty fish, which will not be superfluous for the Russian economy. The main thing is that with all those volumes of oil and gas promulgated, not to incur the world "democratization" ...

Ctrl Enter
Noticed a mistake Highlight text and press. Ctrl + Enter
We are
Results of the week. “While the enemy draws attack maps, we change landscapes, and manually”Google Earth - a military secrets debater
40 comments
Information
Dear reader, to leave comments on the publication, you must to register.