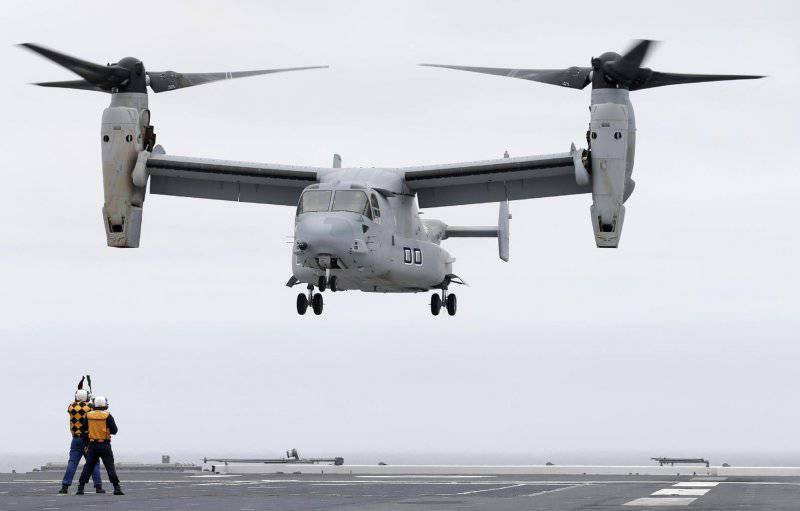 The Chinese military has expressed concern about the use of the MV-22 Osprey convertoplanes in the joint US-Japanese naval exercises Dawn Blitz ("Fast Dawn" - approx. "Military Parity"), held off the coast of the United States (California), said The Washington Free Beacon 12 July. 11 military personnel, including from Canada and New Zealand, were invited from seven countries to the exercises that took place on 28-5000 in June. June 14 tiltrotor first landed on a Japanese ship (the destroyer-helicopter carrier "Hyuga" / Huyga, in the Japanese Navy, there are two ships of this type - approx. "VP").

Beijing claimed that these exercises are preparing attacks on China. The PLA closely followed the course of the exercises, which in turn became the motivation for the announcement of joint Chinese-Russian military exercises, which should begin at the end of this month.

The MV-22 Osprey is a unique air vehicle, combining the capabilities of both an airplane and a helicopter, is capable of transporting up to 32 military personnel, redeploying personnel and equipment to coastal areas.

A well-known military analyst and rear retired Yin Zhou spoke about the use of the Ospreev during the US-Japanese exercise. He stated that the purpose of these exercises was to work out actions during a possible conflict over control of the disputed Senkaku Islands, which China considers its own and calls Diaoyu. According to the expert, Japan has demonstrated that it would not hesitate to go to direct military confrontation with China. Yin also suggested that the exercises were specifically conducted off the coast of the United States, and not in "Asian waters", in order to rule out eavesdropping on Chinese intelligence from talks between the American and Japanese military, where they discussed the "tactics of taking Senkaku."

China has intensified its naval activities around uninhabited islands located between Okinawa (Japan) and Taiwan. Experts believe that there are large oil and gas fields in this area. Japan owned these islands for decades.

Other Chinese military representatives rated the fact that the convertoplan was landing on a Japanese ship as an increase in Japan’s offensive capabilities. Colonel Du Wenlong, a staff member of the PLA Academy of Military Sciences, told state media that the exercises using Osprey represent a “leap” in the development of Japanese military capabilities and are evidence that Tokyo wants to increase its own amphibious capabilities in order to reduce its dependence on USA. Japan needs convertoplanes to conduct offensive operations far from its shores, the colonel believes.

In turn, the Japanese representatives rated the exercises as a buildup of "US-Japanese interaction in conditions close to war." In June, the Chief of the Joint Self-Defense Forces Headquarters of Japan, General Shigeru Iwasaki (Shigeru Iwasaki), stated that the Dawn Blitz exercises "were very important for the restoration of the US-Japan military cooperation system."

The Japanese ground forces formed an infantry regiment of the Western Army (Western Army Infantry Regiment) in 2002, the main function of which is to protect remote islands. The regiment is actively training along with the US Marine Corps, which has a large base in Okinawa. Japan also plans to acquire "four shock amphibians" to accomplish this mission. However, the Japanese constitution prohibits the use of military forces for offensive operations.

China will hold major military exercises with the Russian armed forces from July 27 to August 15. As conceived by China, these exercises should be a demonstration of "discontent" about the American-Japanese maneuvers, which it considers as a "provocation." Wang Jiangsui, head of the Center for Strategic Studies at Peking University in Beijing, said that the Dawn Blitz exercises were evidence of the US military orientation toward Asia, and the Chinese-Russian exercises are a response to "military pressure" on China. Moscow has until now favored the "Chinese overtures".

Meanwhile, the PRC government, represented by Foreign Ministry spokesman Hua Chunying, said that the White Paper on Defense, released in Japan, ignores objective facts and "maliciously plays a card about the Chinese threat." The book says that China “is rapidly expanding and activating its activities in the surrounding waters and airspace. These steps, against the background of a lack of transparency in the military sphere and security issues, are a matter of concern for the countries of the region and the entire world community, including Japan. ”

Hua said that “the Chinese side expresses deep concern and strong dissatisfaction with the actions of Japan” and that “this country has no right to make irresponsible remarks concerning the internal affairs of China”. She also informed that in resolving controversial issues China adheres to the framework of international and domestic law and “will never allow any country to violate the territorial integrity of the country”. Japan "deliberately creates tension and provokes conflicts and confrontation," summed up the representative of the Chinese Foreign Ministry.

General John Broadmeadow, commander of the 1st Expeditionary Brigade of the United States Marine Corps, said that “the first landing of the MV-22 Osprey convertiplane on a Japanese ship is historical moment for the brigade and the US Marine Corps in general. " The participation of the convertiplanes “allows the marines to quickly respond to the crisis,” the general said in a press statement.

Ctrl Enter
Noticed oshЫbku Highlight text and press. Ctrl + Enter
We are
The Washington Free Beacon: China has tested a new ICBM on a railroad carWant China Times: Four Causes of Sino-Russian Studies in the Mediterranean
20 comments
Information
Dear reader, to leave comments on the publication, you must to register.