Mr. Obama, you should not call President Putin! 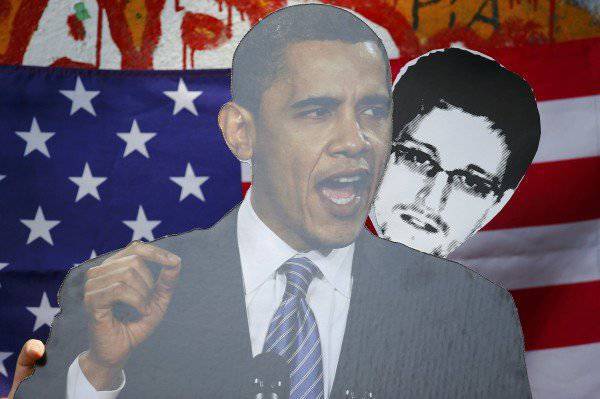 As stated in our same article from 29 June. What happens when the president is silent: “If in the designated period of time - the next two weeks, the United States does not show interest in Snowden, Russia will have to take the initiative. Well, in fact, if the joke with the transit zone of Sheremetyevo is delayed for another two weeks, then the Russian leadership will find it difficult to explain to journalists what is happening on Russian territory, even in the transit zone. This Hochma is no longer a ride. Then Russia will have to look for a way out of this situation, and Putin would not want to. He prefers that the US demands, then the intentions of the Americans will be clear. ”

Here the author accurately guessed the trend of the case for the next two weeks. If it seems to someone that Snowden accidentally began to show some activity at this time, the author advises to think about what was said in that article. History this one really dragged on. Someone says that it put Russia in an awkward position, nevertheless, as long as this is not a fact, the facts are only now beginning to emerge.

Snowden's activity was probably prompted to him by Russian comrades. In this case, Putin squeezes out all that is possible very correctly. The blows and moves of his analysts are very sensitive to the United States. Again, for the United States it would be better if no one ever remembered Snowden, but this will not happen and this is probably the strongest deterrent effect of this event. In the future, the United States will stumble here and there on the results of leaks made by a runaway agent.

The meeting itself or even more precisely the operation, let's call it G9, is the height of skill. Putin let down on the USA their own human rights defenders, who had previously cursed Russia exclusively and had never stuttered about anything else. Now the question was put so that who would refuse to participate in this high-profile case, would become a foreign agent in fact, even without possible declarations of himself in this role.

Washington on this occasion thunder and lightning threw and gnashed his teeth, it was clear that Putin had hit the bull's eye again, or rather, was marking time on Obama’s bloody blisters. However, in general, this could have been foreseen, but Obama’s reaction, who said that he would call President Putin on this issue, is unexpected and says only that there are no other ways for the United States to put pressure on Russia. Remember in the middle years, just that the State Department already “regrets”, “expresses bewilderment”, “prepares sanctions”, “cuts back help” and “even supports the exclusion of Russia” from somewhere and vice versa includes it somewhere .. for example is the axis of evil!

What can Obama say to President Putin? What did he not expect such a reboot? However, here Putin will be able to remind him that the reboot happened in March 2009 of the year, and literally 8 months before, the United States staged a bloodbath in South Ossetia, through its crazy bobby - Saakashvili. It was a huge mistake of America. After the Great Patriotic War, the Russians are well aware of the price of the allies and are not happy with the fact that they are being killed.

At the same time, the United States can do nothing today with a strong Russia. For example, in Afghanistan, the US tightly swallowed the Russian bait called "Russian transit", which is the least costly way out of Afghanistan, which is still to be done by the United States. Another point is also interesting. American political analysts say that Russia is systematically hindering the national interests of the United States, probably not at all assuming that Russia has its own national interests, which are closer to it than the interests of overseas partners.

One such clever man said that the United States needed Russia to be calmer on the world stage and would enable the United States to implement its plans. One would like to ask whether a respected analyst comes to mind that Russia intervenes only when it touches its national interests, while the United States interferes always and everywhere. So maybe this is the US should be calmer and not smoke in the powder warehouse? Otherwise it will surely cause explosive consequences. But for the US, any of their foreign policy or military plans are untouchables for other countries. In any case, it used to be that way.

The idea with the list of Magnitsky looks completely stupid. American lawmakers thought they would frighten someone with this, and it turned out that Putin turned these initiatives on the gain of Russia itself and even took the cream off of this law twice. The first time when he signed the law of Dima Yakovlev, and the second time when Magnitsky's list hit the top of the government and a ban appeared on foreign bank accounts. As a result, the US influence on the Russian elite has decreased. Is it in the interests of the United States? Of course no! The silly American lawmakers from the backyard chess club sat down to play with the grandmaster. The problem here is that the more chess boards in this simultaneous game, the worse the situation for the United States.

Judge for yourself if the grandmaster is alone, and they play against him on 16 boards, then each game he loses is only 1/16 point, but each point won is full. This does not happen in chess tournaments, but that is how it looks in international politics. This does not seem to be understood in the USA and is substituted over and over again. Previously, all this was supported by powerful fleets and quick punishment. Now, no retaliation, no violence, no fleets. Even CIA officers on unpaid leave. Approximately the same as in Russia in the zero years. Just do not need to curse Russia and Putin now, this is the work of your hands, gentlemen, crazy "McCain and Cardins." As for the law of Dima Yakovlev, it was a very gnawing slap in the face after which US politicians cannot recover until now.

Recently, in one of the private conversations with one such gentleman, the author of the article heard a question to himself: "Do you think Putin will continue to apply sanctions against the United States if he does not like what we accept against Russia, or he has already fired all the powder He had?". Honestly, the question took by surprise. The first natural reaction was not to restrain oneself and laugh, but one should not forget that it was a confidential conversation and thus offended the interlocutor, in the future one could simply lose such a wonderful opportunity of direct communication. I had to answer in detail.

Putin did not shoot anything and did not even try to do it. The expression itself is not correct here, it still implies some spontaneous actions. Putin, for the time being, only felt the path of influence, he, as American pioneers moving along a new path to undiscovered lands, is looking for the best moves, and having found them, develops a further route. Neither of which a shot can be no question. In general, if we are talking about shots, then for Putin this is the last thing, but if it still came to that, then Putin would prefer a knife, not a gun. Knowledgeable people say that the knife in such matters is the subject of personal skill, and the Colt is just an impersonal approach. But Putin and with his bare hands are not a gift.

The deterioration of interstate relations is not a story today. Last year, right after his election, Putin refused to pay a visit to Obama and the meeting in the Oval Office crashed down, crushing those who had planned it. It was an incredible nonsense that the United States does not first. Earlier, Israel also pierced. Well, think for yourself. The owner of the office Obama in his place the owner, and Putin on what? At the place of the petitioner or subordinate. Similarly, in Israel, they wanted to fasten a pile on it, thus recognizing the supremacy of a religion alien to Putin. Gentlemen preparing this dish in their kitchen, it seems that they themselves were scalded. By the way, to note that for those who are proud of their religion only in that it was the source for the rest of the religions, the good is very little. People are proud of the past when the present can not be proud.

If the author of this article was an adviser to Obama, the advice would be: Do not need to call Putin and ask for the extradition of Snowden. Your deeds should speak in favor and instead of your words, and not vice versa.

Generally speaking, political science in the United States has come into significant decline. The Americans missed the moment when it was necessary to develop other mechanisms of influence or even more correctly to say interaction. Even with a strong fleet and a rich country, it was necessary to think about scant years, but instead the United States crushed everyone in their fat years. Nobody thought about building human relations between countries, everything was slipping into some kind of global gangster disassembly. Maybe because in the American politics then there were Texan motives of the President-cyclist? There are known bullets whistling, and thoughts are asleep. But all this will continue for some time, until rotten teeth are pulled out of the political American mouth, such as McCain, who stinks around the world and makes self-respecting people move away from this happiness away.

Ctrl Enter
Noticed oshЫbku Highlight text and press. Ctrl + Enter
We are
A great interview with Sergey Lavrov: about Ukraine, Obama and IranWhat you didn't want to know about England
Military Reviewin Yandex News
Military Reviewin Google News
112 comments
Information
Dear reader, to leave comments on the publication, you must sign in.