Bashar Al-Assad: Sons of Workers and Peasants Protect Their Homeland 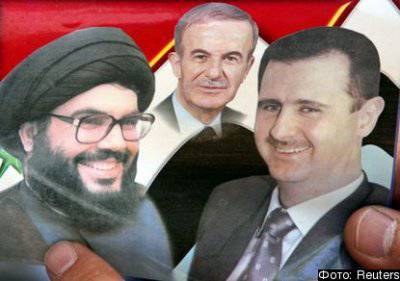 The US continues its hypocritical policy against Syria. US Congress blocked Obama's supply decision weapons terrorists, clearly pointing out that these weapons will inevitably fall into the hands of extremist forces like al-Qaida (however, many of them suggest that some "good" terrorists do exist). But at the same time, Pentagon spokesman George Little made a statement that the United States will look for ways to assist Syrian "oppositionists." And the law does not need them, and the Congress is not a decree.


The unfaithfulness of Obama’s concept of “good” and “bad” terrorists confirms the following fact: al-Qaeda militants killed one of the leaders of the so-called “Free Syrian Army” - a certain Kamal Hamami. He went to negotiate with the Jabhat Al-Nusra cell associated with al-Qaeda. And there the “bad” terrorists killed the “good”, according to the Americans, terrorist. At the same time, al-Qaeda members promised to "kill the entire Supreme Military Council." And officials of the White House and the Pentagon still keep saying about some “fighters for democracy” who need help with weapons.

At this time, the people of the United States show that he is opposed to Obama’s anti-Syrian policy. Many Americans are unhappy that the United States, after long, costly and bloody adventures in Iraq, Afghanistan, and Libya, is drawing itself into another war. Immediately in several US cities - New York, Chicago, Los Angeles - marches of solidarity with Syria took place. They were attended by citizens of the United States, activists of anti-war organizations, and representatives of communities from Syria and other Arab countries. On the streets of American cities, among the glamorous, glittering windows, hundreds of people marched with flags, portraits of Bashar Al-Assad and posters "Hands off Syria and Iran!" "Militants are mercenaries. They get billions of dollars. It doesn’t matter from Turkey or Qatar, but ultimately it is American money, ”participants said. They sent Obama requests to stop supporting the militants with money and weapons, lift economic sanctions from Syria and stop interfering in her internal affairs.
In Damascus at this time, President Bashar Al-Asad chaired the meeting of the renewed leadership of the Arab Socialist Renaissance Party (known as the Baath Party). He stressed the importance of cooperation between the leadership of the party and its ordinary members and enhancing the interaction of party structures with the public, in particular, with young people.

At the same time, Bashar Al-Asad gave an interview to the Syrian newspaper Al-Baath (Revival), in which he stressed that the party continues to advocate for the interests of the broad masses of the people - workers, peasants, artisans. “It’s the sons of the workers and peasants who are protecting the homeland now,” he said and added that some of them were in the army, and many others were in the people's self-defense units, who stand shoulder to shoulder with the military. This proves once again that it is impossible to portray what is happening as the struggle of the people with the state or party. Conflict today exists between knowledge and ignorance, between patriotism and betrayal, between moderate and radical forces.

"The party is a target for those trying to erase history and accuse her of destroying the country, despite all its achievements, ”said the president, refuting the slander that goes against the Ba'ath and the situation in Syria as a whole.

Speaking about the idea of ​​Arab unity, on which the party is based, the Syrian leader noted that she is alive, despite the actions of some Arab leaders. The basis of such unity is patriotism.

According to him, the concept of Arab unity, which was in 50's, that the Arab world, in fact, is one state with a single government, cannot be implemented today and in the foreseeable future, since Arab countries have different economic systems, and also because of the moods of individual rulers.

But the idea of ​​unity is not connected with governments, but with peoples. And an example of the fact that the idea of ​​unification is alive is the fact that young people in Egypt these days took to the streets with portraits of Gamal Abdel-Nasser, who died four decades ago, but now is the national symbol of all Arabs. This means that, despite all the attempts of some destructive media, the Arab peoples are still aware of their national identity, Bashar Al-Assad stressed.

He again sharply criticized the policy of the Muslim Brotherhood and pointed out that the recent events in Egypt showed that the concept of "political Islam" did not justify itself. The Muslim Brotherhood uses religion, hiding behind it, as if behind a mask. They believe that those who disagree with them are against God. When the journalist asked if Hezbollah is not the same organization, Al-Assad stressed that, unlike the Muslim Brotherhood, Hezbollah judges people not by their faith, but by their adherence to patriotic principles.

When it came to abolishing the 8 th article of the former Constitution at the very beginning of the crisis, which stated that the Arab Socialist Renaissance Party was ruling, Bashar Al-Assad stressed that there was a mistaken view that this article was keeping the party in power. In fact, this is not true. And in accordance with the previous Constitution, which contained the 8 chapter, any political party could run for parliament and seek support among the people. (Let me remind you that at present a new Constitution has been adopted, which further expands the rights of political parties).

The Ba'ath Party, the president said, came to power back in 1963, and its strength was (and is) not at all in the 8 article. The real strength of the party is in interaction with the masses and in the popular support and effectiveness of its political and socio-economic program.
He also pointed out the need to fight corruption, which is a very important moment for the party to interact with the broad masses of the people. Great attention should also be paid to criticism at all levels. Each official must be accountable to the people for their activities and for their mistakes.

The head of the Syrian state highly appreciated the role of national media in the country's resilience in the face of hostile plans. He noted that the war launched against the SAR was initially informational. It was the hostile media that prepared the basis for further anti-Syrian actions. He thanked the honest workers of the Syrian newspapers, TV channels, news agencies, who throughout this time opposed this fierce disinformation campaign.

Indeed, without the lies of some media, terrorists could not act so brazenly. In conditions when gangsters enjoy support, they are “inspired” to new and new crimes against civilians. So, on the evening of July 11, the Christian quarter of Damascus Kassa was shelled from mortars. Several people were injured. Two mortar shells exploded near the lively Abbasiinov square, where several citizens were also injured.

The servicemen prevented a terrorist act against motorists on the Damascus-Homs highway near the city of Harasta, having discovered and demined two explosive devices laid by the militants.

Thus, the struggle between law and terror, life and death, truth and lies continues ... And let the sons of the workers and peasants distance their holy homeland from the hired terrorists, assisted by the wealthy from the USA!

Ctrl Enter
Noticed oshЫbku Highlight text and press. Ctrl + Enter
We are
Bashar al-Assad: In Syria, not the “revolution” that the enemies are talking about, but the revolution of the army and the people against terroristsBashar al-Assad: Captain does not run from the ship
Military Reviewin Yandex News
Military Reviewin Google News
185 comments
Information
Dear reader, to leave comments on the publication, you must sign in.