July 15 2013
7
At the very beginning of the eighties of the last century, a new proposal appeared in the Soviet Union concerning the use of self-propelled artillery. According to him, self-propelled guns on a wheeled chassis were to appear in artillery units. Such combat vehicles, it was claimed, could act from positions near the roads and quickly move away from retaliation, using their driving characteristics and good roads. The proposal interested the military and soon began the development of a new ACS with the 2C21 index and the name Msta-K. The self-propelled gun was created by several scientific and design organizations, the lead developer is the Petrel Research Institute.


As is clear from the name of the project, the 152-mm rifled howitzer 2А67, which was a slightly modified 2А64 / 65 gun, created for use in a towed and self-propelled version (on a tracked chassis) was chosen as a weapon for the new ACS. The new 2А67 differed from previous guns in the layout of recoil devices, as well as in the structures of the cradle, rammer and counterbalancing mechanism. All these parts of the artillery system were converted for use on the new ACS with the original turret. The fact is that the promising self-propelled 2C21 had a combat compartment fully located above the epaulette. This necessitated a corresponding change in the design of the instrument and auxiliary systems.

The result was an armored module of a relatively large size, in which it was possible to place all the gun units, sighting equipment and crew jobs. The design of the tower and sub-tower systems allowed to rotate it around its axis. However, it was likely that the proposed wheeled chassis should have imposed significant restrictions on the turret when firing, since a powerful recoil could knock down the combat vehicle. According to the available data, the elevation angles of the gun were maintained at the level of the towed howitzer variant: from -3 ° to + 70 °. 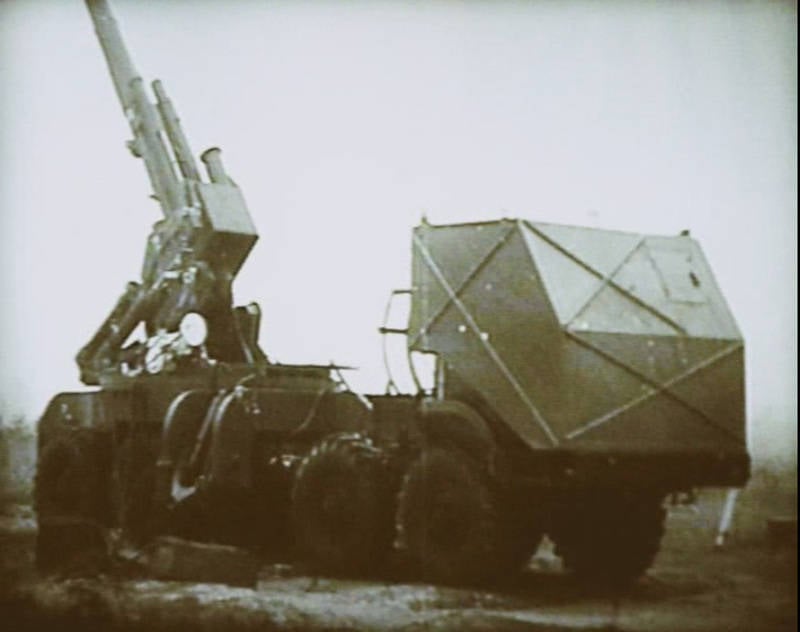 As part of the fire tests for 2C21 "Msta-K", a wheel chassis of the type KAMAZ-5320 with openly installed 2-64 art gear and with a limited angle of elevation was used. Shooting was carried out to determine the load on the chassis, loading was done manually. In the future, it was planned to work out the mechanized flow of projectiles / charges from the machine on the same base.

Since the barrel and a number of other units remained the same, the characteristics of range and rate of fire remained the same. According to calculations, the unloading mechanisms made it possible to produce up to seven shots per minute and send high-explosive fragmentation shells to a distance of about 25 kilometers. When using ammunition with a gas generator, this parameter had to grow accordingly. As a result, the firepower of the 2C21 wheeled ACS was approximately equal to the potential of the Msta-S tracked self-propelled gun. In this case, two self-propelled guns, as expected, could complement each other and effectively perform the tasks in appropriate conditions.

However, the creation of a tower with a gun turned out to be one of the simplest stages of the project. Much more difficult and lengthy was the search for a suitable wheeled chassis, capable not only of carrying a large and heavy gun turret, but also withstanding the powerful impact of 152-mm guns. In the 1982 year, according to the results of the research work "Chassis", the employees of the Central Research Institute "Burevestnik" came to the conclusion that it was possible to use the eight-wheeled vehicle Ural-5323 as a base for the ACS. In the second half of 1983, Burevestnik, in conjunction with the Ural Automobile Plant, built two experimental self-propelled guns based on the selected chassis. The tests of the self-propelled guns on the wheel track proved the possibility of implementing the idea, but it was not without difficulties. One of the main technical problems was the strength of the selected chassis. The wheels and suspension of the Ural-5323 coped with the loads when shooting, but they literally worked on the limits of possibilities. With further improvement of the artillery part of the characteristics of the chassis could be insufficient. 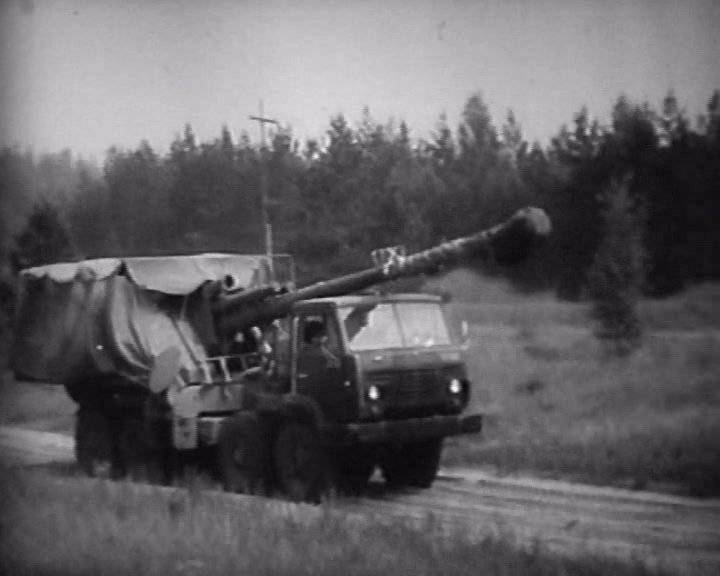 The Kremenchug KrAZ-6130 chassis, which was a development of the KrAZ-CR-3130, was considered as an alternative to the Ural plant car. The modified and enhanced wheel suspension, as in the case of the Ural-5323, provided good road performance on the highway, but the strength of the aggregates continued to raise doubts. Finally, they tried to install a gun turret on the KAMAZ-5320 chassis. This option looked much more successful and promising, but in this case additional research was required. Based on the chassis assembled in Naberezhnye Chelny, an experimental self-propelled gun with a lightweight and simplified turret was built. The gun 2А67 mounted on an open platform. The tool installation system had noticeably smaller elevation angles in comparison with the originally planned ones.

A self-propelled gun mount based on the KamAZ-5320 vehicle was used to measure the loads arising from firing and check the proposed technical solutions. Exact information on the progress of these tests are not available. According to the scattered data, employees of the Petrel Research Institute and related organizations managed to determine the main methods of solving the problem with high returns. The stability of the position of the gun when firing was supposed to provide with the help of the coulter and the corresponding recoil devices. After the tests, the purpose of which was to solve the problems of structural strength, it was planned to deal with projectile feeding mechanisms. In particular, the possibility of transferring ammunition to a combat vehicle from a transport vehicle on a similar chassis was considered. 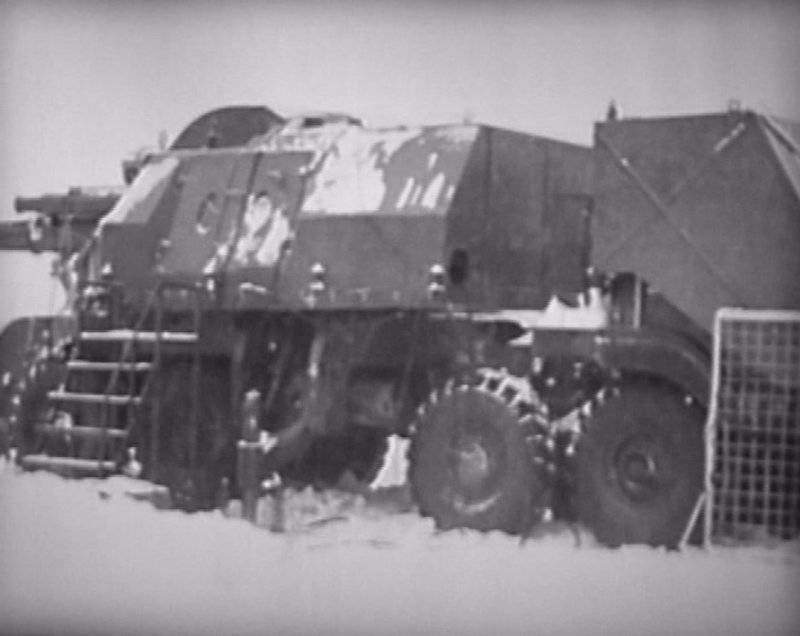 Unfortunately, this work has not begun. There is information about the start of development of the auxiliary machine, but this part of the project has not reached the construction of the prototype. The “Msta-K” project turned out to be quite complicated and long, due to which, by the end of the eighties, it remained at the research and design stage. At the end of the decade, funding for the program was reduced, and at 1991 they completely stopped. Because of this, it was not possible to complete even the planned research.

As of the end of the project, several questions remained open. First of all, it was not possible to fully understand the problem of the impact of recoil on the wheeled chassis. The applied technologies did not allow to get rid of the risks of damage to the suspension or even the design of the car. The second disadvantage of the promising wheel-mounted ACS was the relatively low permeability of the selected chassis type. Even taking into account the requirements for work near the roads, the four-axle vehicles that existed at that time did not quite suit the customer. Also, the chosen architecture of the wheeled self-propelled gun did not allow for an adequate level of vehicle cabin protection. Thus, the entire crew of SAU except the driver was protected from a wide range of enemy weaponsand the driver himself constantly risked getting hurt. Finally, when firing from a powerful 152 caliber millimeter gun, there were cases of damage and destruction of the cockpit glazing. This problem could be solved with the help of durable, possibly bullet-proof glasses, but this negatively affected the weight indicators of the whole machine. 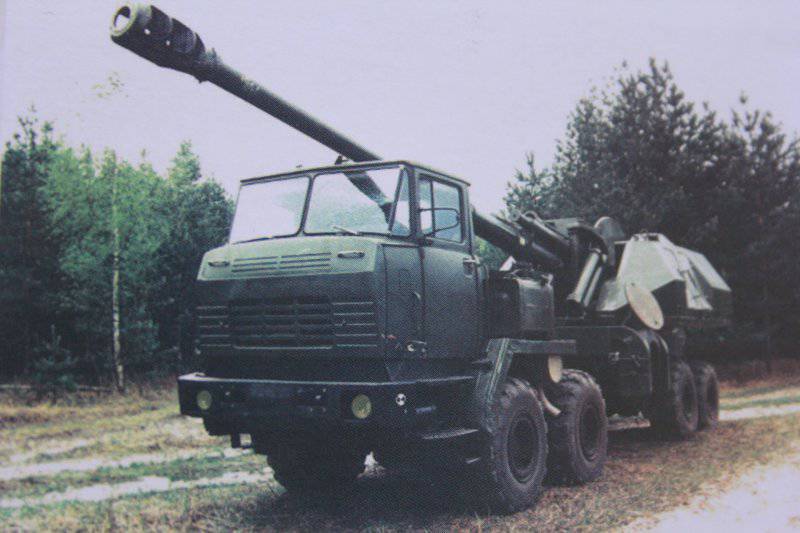 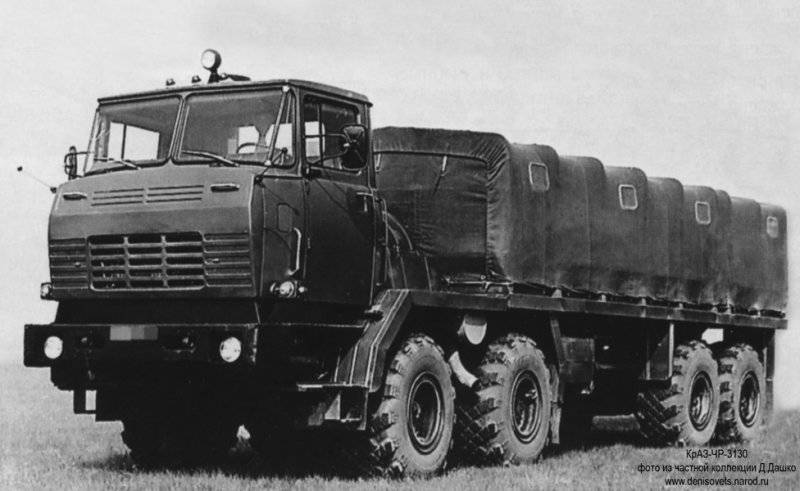 It should be noted that the initial search for a suitable chassis was seriously complicated by the estimated mass indices of various systems. So, a tower with a gun and mechanized installation, at least on 30 shots, weighed about 17 tons. Another three tons accounted for the device chase tower and coulter unit. Thus, a chassis with a lifting capacity of at least 20 tons was required. At the end of the project was supposed to return to the car KrAZ-6316. The plans were its refinement with the equipment of the new cabin. Especially for use on the ACS 2С21, the Petrel Research Institute has developed a new low-profile armored cabin. The dimensions of this unit in the future would allow firing over the roof of the cabin, with certain restrictions on the angle of elevation.

Due to the gradual cuts in funding, the Msta-K project in the late eighties began to slow down. In the 1991 year, as mentioned above, funding stopped altogether and in Petrel was forced to stop all work. Because of this, our armed forces did not receive a new self-propelled artillery installation. As for the Msta family of howitzers, only two systems remained in its structure: the MSTA-B 2A65 towed gun and the MSTA S self-propelled 2C19. Work on the subject of wheeled self-propelled guns in our country was resumed only almost two decades after the closure of the 2C21 Msta-K project. According to available information, the new self-propelled artillery installation "Coalition-SV-KSh" will be built on the KAMAZ-6560 wheeled chassis. 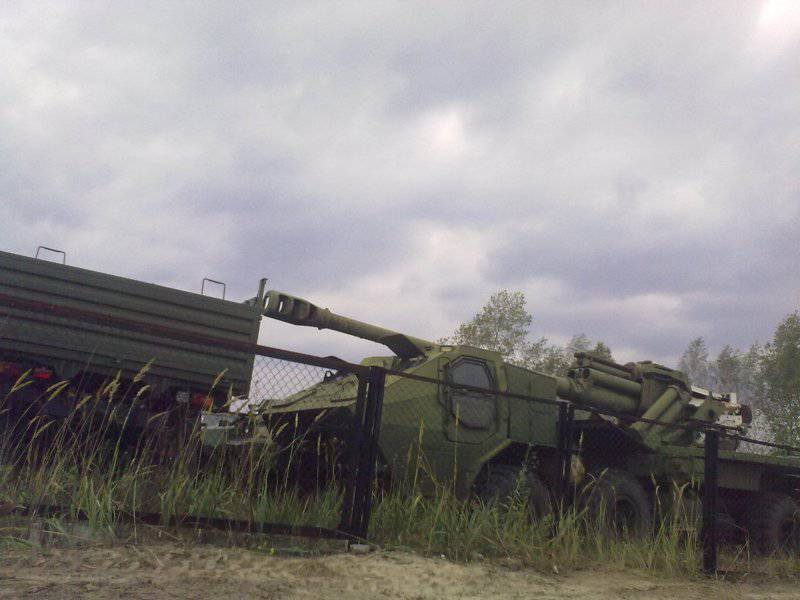 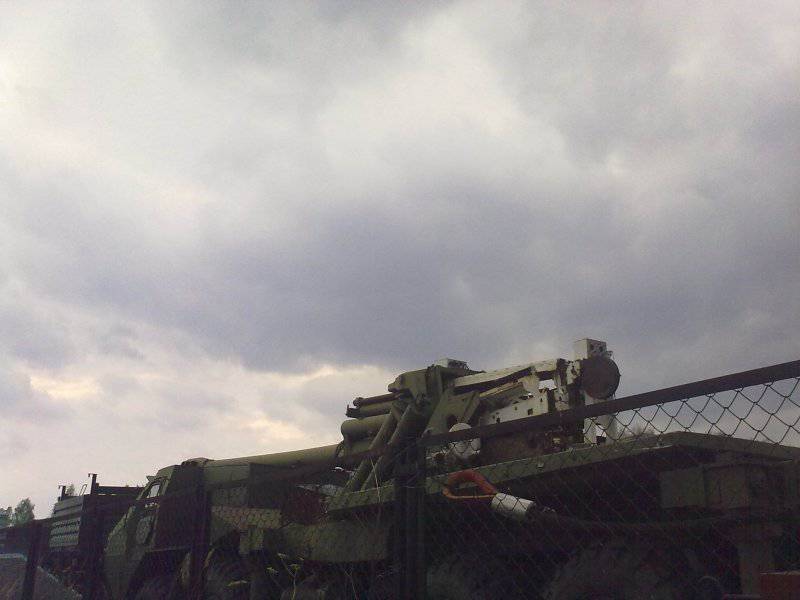 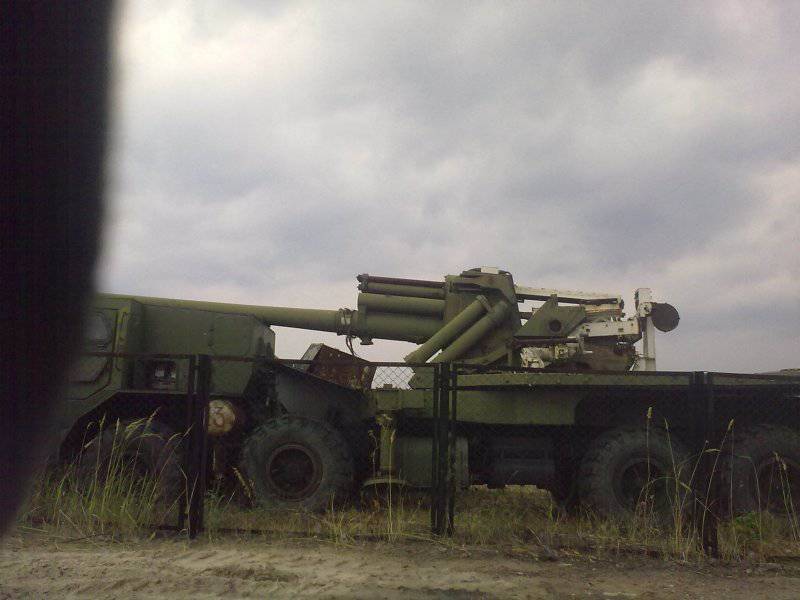 It seems that in the photo there are remnants of a mass-dimensional mock-up of the CJSC Msta-K on the KrAZ chassis to confirm the possibility of creating such a machine and carrying out sea trials, since motorists strongly resisted any deviations from the base KrAZ-6316. All the mockups and prototypes were built by Burevestnik at the technical design stage, and at the design documentation development stage the topic was closed and the matter did not reach the metal. http://www.russianarms.ru/forum/index.php/topic,5899.msg75575.html