Five minutes from the war 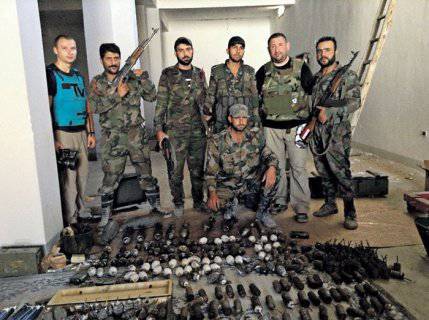 And how was it? Unrest, insurgency, quick help to the rebels from the side ... Everyone thought that the young, according to some sources, even the major president of the country, Bashar Assad, would fall. Surrenders, resigns, leaves to live out his comfortable life somewhere in the Canaries. Not. He was not scared neither by the United States, nor by the European hawks, nor by the Arab states loyal to the New World. He bit the bit and went into battle. Yes, Iran, China and Russia are helping him. But! Against a whole bloc - NATO. Including the nearest Turkey.

So, we (the “Vesti” film crew) set off to cover the events. Flight to Beirut. Lebanon is a neighbor of Syria. Its central airport is the safest landing point for those traveling to Damascus. From Beirut to Damascus - just over 100 km. First, the border. At night, and we arrived in the morning, to pass it is not so dreary as the day. Next on the Syrian side are eight posts. At each check: "Russian? Pass! ”The attitude is almost like a relative.

Damascus. City center. The most that neither is the usual oriental life. Well, except that the police posts at intersections and bridges. Machine gun positions, covered with sandbags. Everything. And so ... Cafe, shops, children, women. Men are relaxed. Bustle bazaar. The only thing is that merchants sometimes shrug their shoulders and click their tongues: “With pearl buttons? Sorry, no (and guiltily) - the factory was bombed. ” And it's almost always true.
A little closer to the outskirts - military facilities fenced with concrete. Directing the lens towards them is prohibited. Everywhere portraits of the leader Asad. In the city - in civilian clothes. On military sites - in camouflage. And sometimes in camouflage and dark glasses.

Foreign journalists in Damascus live in a hotel. In one of the best in the city. Pool, gym, very comfortable. War? Here it is, at your side! However, from the "foreign" I saw only a group from Channel One. Once, in the lobby. On the set, we have not met.

The first exit to the shooting. It would seem, outside the city. But it turns out that going to the war from the city center is five minutes. The number of barriers increases dramatically. Then the ruins and finally the headquarters. The general, without leaving the table, reports the situation: “We have liberated the most important urban area. Harost. They are seriously entrenched here! ”We are shown the captured photo maps: all posts, all military objects on them are designated as top-priority targets.

Having put on body armor, we go to the territory which has just been liberated from the militants. Houses, industrial buildings pounded shells in the dust. Defense of the repulsed bridgehead focal. There is a division, there. Squeeze through the ruins. We represent: "Colonel Adnan." Who is he, what is responsible for - no one will say. The colonel introduces the course: “They have good snipers. Professional. Not ours. Most likely Chechens. ”
Indeed, there is no cannonade. Rare shots. Clicks. Who was in the war, and not just a fun blogger, knows:
“Click” is for you, in your direction. So shoot rarely, rarely. Mostly in the case, not "by squares".

“The buildings here are strong, fundamental. They were holding mortars and guns here. Snipers sat on the roofs, machine gunners.
Heavy. Traveling through the ruins, and halfway jogging. The shelling sectors are known only to the Syrian military. They suggest, more gestures than words: “To the left! Take to the left! "," Run! "," Bend down, bend over !!! "

Another basement. Entire exhibition: homemade ammunition. Landmines converted from tank charges, mines with chopped-welded shanks, grenades poured into sandy molds, and small, cylindrical "hattabs" with a sticking fuse cord. In the middle of the basement there is an industrial coffee grinder, converted into a TNT machine. Explosives were cooked in it.

“Here to you the Harost! How long could not take! Here they had the headquarters and the court - they executed the guilty ones according to their notions here! And we freed the track on Homs! Now the help to the militants will not work, and it is easier for us to help in Homs! ”

At the end of our journey, Abu-Bashar exclaimed in our hearts:
"God in heaven, Syria on earth, and Bashar Asad in the heart"!

True, he did not want to repeat it to the camera.

Ctrl Enter
Noticed oshЫbku Highlight text and press. Ctrl + Enter
We are
Bashar Al-Assad: We have absolute confidence in our victory (+ full text of the President’s interview)Interview by President Bashar Al-Assad to the Sunday Times
Military Reviewin Yandex News
Military Reviewin Google News
32 comments
Information
Dear reader, to leave comments on the publication, you must to register.