China's nuclear arsenal: Beijing can provide a sufficient level of deterrence and solve the problem of Taiwan 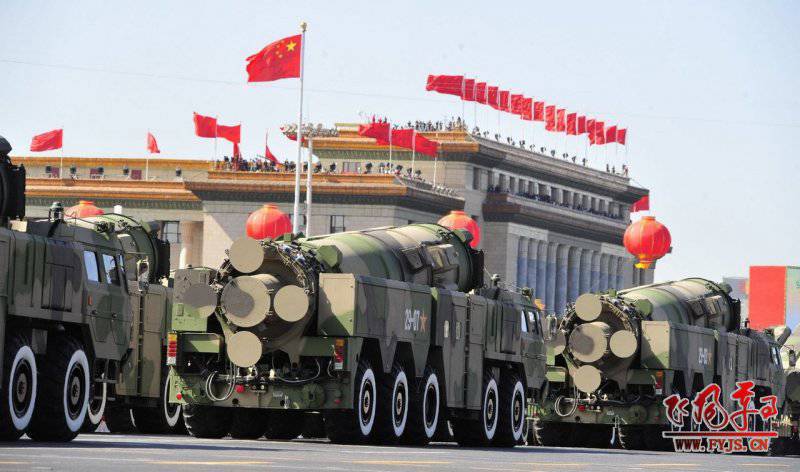 In recent years, the attention of the whole world has been riveted on the People’s Republic of China. The country shows tremendous economic growth, being the second economy of the world after the USA. At the same time, China conducts an independent policy, and also has an unresolved conflict with Taiwan. This also adds to the problem of overpopulation - the population of China is already more than 1,3 billion people. All of the above causes many to focus their attention on the state and level of the Chinese armed forces. The PRC Army has the most numerous personnel, but the qualitative component, until recently, left much to be desired. In recent years, in connection with the development of industry, the PRC has achieved quite a great success in the military-industrial complex, although it often uses the methods of complete copying of foreign technology, most often acquired from the Russian Federation.

If China often demonstrates samples of "traditional" military equipment in parades and does not hide under the "secret" stamp, then information about the strategic forces is extremely scarce. And this is despite the fact that all the other countries of the “nuclear” club publish reports with detailed periodicity with detailed information on the quantitative and qualitative composition of their nuclear arsenals (the number of warheads, the number and types of strategic carriers). At the same time, it is clear that strategic forces are the main guarantor of the security and independence of such a serious global player as China. Without sufficient for reliable nuclear deterrence of the number of warheads and their carriers, the country will not be able to solve all those global tasks that the state, which claims to be a superpower, must set for itself. That is why it is worth analyzing in detail the nuclear arsenal of the PRC.

Nuclear weapon China first experienced in 1964 year, and thermonuclear - in 1967. From that moment on, the Chinese army began to be equipped with nuclear warheads. At that time, they were short-range and medium-range missiles, such as, for example, DF-1, with a range of 2000 km (a copy of the Soviet P-12). Further, in the 70s, missiles with a longer range were developed - DF-3 and DF-4 - 2800 km and 4700 km, respectively. These missiles are still in service with China. However, they do not reach the intercontinental range, and certainly do not allow strikes on the territory of the same United States. The first tests of ICBMs were conducted by the People's Republic of China in the 1980 year. It was a new DF-5 rocket, which had a range of up to 13000 km. From that moment, China began to have the opportunity to hit targets in the United States. In recent years, mobile ICBMs DF-31, with a range of up to 8000 km, have begun to be supplied to the People's Republic of China, and the mobile ICBM DF-41, carrying the 3-4 individual targeting warheads to 14000 km, is at the testing stage. Adoption of the latter will make it possible to strike across the US, taking into account the tasks to overcome missile defense, since according to some reports, DF-41 will be able to carry false targets.

At the moment, according to open data, the PRC has an insufficient number of strategic carriers in order to approach the two nuclear giants, the United States and the Russian Federation, and to guarantee complete immunity. China has only 20 MBF DF-5 and 20 BR DF-4 (can be classified as strategic, since the range of the rocket allows you to strike almost 2 / 3 territory of the Russian Federation). The number of DF-31 and DF-41 is still a mystery. DF-31 missile production is probably already underway in large quantities, starting with the 2000s, when the rocket was tested. It can be assumed that at this rate of development of the PRC and its armed forces, mass production of mobile DF-41 ICBMs will soon be possible, which may for some time pull China towards the level of deployed nuclear warheads in the 300-400 (the United States and the Russian Federation have there are more 1500) on strategic media. Then China will be able, without much “consulting” with anyone, to unleash local wars and operations that are beneficial to it. For example, to launch an invasion of Taiwan, guaranteeing non-interference by the United States (at least, direct).

The most problematic for the PRC at the moment is the strategic submarine fleet. It consists of only one submarine, a missile carrier, armed with 12 single-stage solid fuel rockets Jiulan-1, with a range of 1700 km. According to some reports, the missiles on the submarine are now being replaced by Jiulan-2, with a range of 8000 km (analogous to DF-31). In any case, this is absolutely insufficient so far, and, apparently, while China is experiencing big problems in creating effective submarines. In this area of ​​work, the PRC has no end - in fact, strategic fleet this country has not yet. And this is one of the most important components of strategic forces.

From all of the above, we can conclude that at the moment and in the medium term, China will not have the strategic forces sufficient to guarantee nuclear deterrence. But to treat the PRC in the long term in these matters is necessary with great caution - since a significant portion of the information related to China’s nuclear projects is closed, and industrial and technological growth is enormous.

Ctrl Enter
Noticed oshЫbku Highlight text and press. Ctrl + Enter
We are
Military reform as an integral part of the security concept of the Russian Federation: Systematic dynamic assessmentRussia is unlikely to avoid China’s expansion in one form or another.
Military Reviewin Yandex News
Military Reviewin Google News
4 comments
Information
Dear reader, to leave comments on the publication, you must to register.