Unmanned Alabino. Defense enterprises are fighting among themselves for the attention of the Ministry of Defense 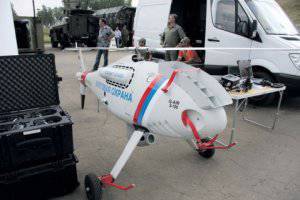 In Alabino near Moscow, several dozen unmanned systems of various classes and types showed the leadership of the Ministry of Defense. The most representative in Russia, as indeed in the whole world, is the mini-UAV class. They constituted the overwhelming majority of the systems presented.

One of the first mini-UAVs in the series was the Bird Eye 400 set by the Israeli company Israel Aerospace Industries. A limited batch of these systems was purchased several years ago by the Russian Ministry of Defense. Next to him was the same apparatus, assembled at the Russian enterprise UZGA, which is part of the Oboronprom, under a license agreement with IAI.

Also in this category, it is worth noting the development of the Kazan company Enix and the St. Petersburg STC. UAVs "Eleron" and "Orlan", developed and produced by these companies, have already passed state tests through the Russian Ministry of Defense and, as expected, in the near future can be delivered to the troops. By the way, it was these drones that carried out sorties in order to conduct aerial reconnaissance during the imitation of hostilities conducted in Alabino.

Izhevsk company ZALA, traditionally specialized in the field of mini-UAV systems, brought almost the entire line of UAVs that it had previously created, taking an impressive piece of the exhibition.

In addition to the above-mentioned unmanned aerial vehicles, the exhibition also included the Pear and Tachyon systems, created by another Izhevsk company Izhmash-Unmanned Systems. Relatively simple and inexpensive drones “Pear”, intended for reconnaissance and surveillance in the near zone, “over the hill” were already supplied in small quantities to the Russian military department. 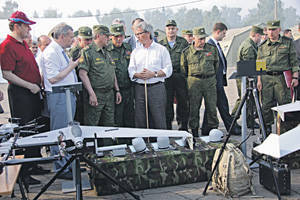 Chief Designer Alexander Zakharov tells Defense Minister Sergei Shoigu about the advantages of a UAV created in their company.

The tactical class UAVs at the event were personified by the Tipchak and Stroy-PD complexes of the Vega concern. Obviously, the complexes were taken from those in the units, mainly to show the starting level that our Armed Forces had a few years ago. Apparently, Vega is currently working on a new tactical class complex for the Russian military, but there is still no open information about this project.

Another tactical unmanned system was presented by Izhevsk company ZALA, which, by the way, had previously actively cooperated with Vega. The model of this UAV was already shown to the public several years ago at one of the previous MAKS air shows. However, later the development was lost from the site and from the booklets of the company. Therefore, it is difficult to talk about it as a finished product, most likely because ZALA emphasizes its ambitions to enter the new segment of the UAV market.

But the St. Petersburg company Transas brought to the exhibition a ready-made, developed tactical system Dozor-100. The system was created on its own initiative and did not fully fit into the dimension made by the Russian military, however, it can be used in paramilitary structures - the frontier service and the coast guard, drug control, the Ministry of Emergency Situations.

The largest of the drones available at the event was represented by the already mentioned UZGA plant from Yekaterinburg. This is the Forpost complex, which is a licensed version of the Searcher MkII Israeli UAV, a small lot of which was purchased by the Russian military a few years ago. 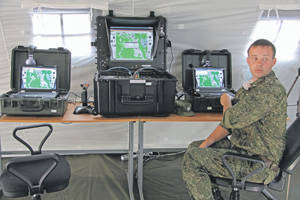 As for the larger medium-altitude drones of long duration, their projects developed by Transas and Sokol with an take-off weight of about 1 tons and about 5 tons, respectively, were also presented at the show in Alabino. However, it was possible to get acquainted with them only in the closed part of the exposition.

These topics were set by the Russian Ministry of Defense just two years ago. Nevertheless, the Russian military would like to have at their disposal analogues of the American UAV Predator and Reaper as quickly as possible. The developers are tasked with creating high-tech drones almost faster than the American company General Atomics did for the Pentagon.

Also in the closed mode, some intermediate results of the OCD “Hunter” were presented, within the framework of which Sukhoi created the impact UAV. It is obvious that sukhovtsy, like transassists, will also have to force the "five-year plan over three years" - interest in the heavy assault unmanned apparatus of the Russian military is very high, given the significant successes recently demonstrated by the United States in developing this class of UAVs.

Helicopter-type drones are also a very interesting and important segment of unmanned systems. The topic of unmanned multikopter, popular in our days, is also reflected in the Alabinsky event. There were at least five multiple screw UAVs created by various companies, from those close to “toys”, to their own kind of heavyweights, lifting kg to 10. The latter were demonstrated by the company NELK, which specializes in multirotor devices. Already today they are used in the Ministry of Emergency Situations and the Ministry of Internal Affairs. In the Ministry of Defense, they can be used in special operations forces.

The ZALA light unmanned helicopters presented at the event have already been delivered to some power structures. However, created on the basis of model aircraft, they can hardly be taken seriously.

A much more advanced helicopter type UAV was represented by Horizon from Rostov-on-Don. This is a very successful in its class system, actively sold around the world. Unfortunately, this system is not Russian development. In our country, as part of an agreement with the Austrian company Schiebel, Camcopter S-100 unmanned systems are being assembled and adapted for use by a Russian operator. One of the main customers for Horizon is traditionally the Border Guard Service of the Federal Security Service of Russia. The mentioned unmanned helicopter is used in the Coast Guard of the Frontier Service. However, obviously, the company has an interest to expand the number of customers from other security agencies, including the Ministry of Defense.

The state of work on OCDs in the field of the Roller and Albatross helicopter-type UAV systems could only be guessed at - some intermediate results were reported to the military leadership by Sergey Mikheev, the general designer of the Kamov company. However, due to the fact that the Eaglet helicopter, which was previously supposed to be the basis for one of the helicopters of Russian Helicopters, was demonstrated in the open area, it can be concluded that at least with the Roller implementation, all is not well, and Orlyonok kept here as a backup option. 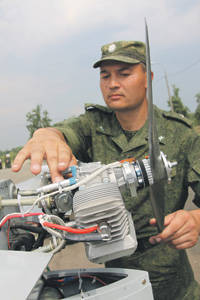 Major Alexei Astafyev checks the work of the UAV before its launch.

Despite statements by some media outlets that such an event is being held in Russia for the first time, this is far from the case. Inspections like this have already taken place, both here, in Alabino, and in other places, for example, in Kubinka, in Yegoryevsk, and in other venues. Most of the unmanned systems on the open site are already well known from exhibitions and exercises.

However, it is impossible not to note some positive developments. If we consider the attitude of the Russian military to the subject of UAV systems over the past 10 years, then in the last two or three years there has been a clear change. The first step was to increase funding for relevant research and development projects through the Ministry of Defense. Over the past few years, the Russian military has set the industry a number of research and development projects in the field of UAV systems.

The second step, which is a clear indicator of the real attention of the military to the subject of UAV systems, was the formation in the structure of the General Staff of the new administration, which will deal exclusively with UAVs. As the Deputy Chief of the General Staff, Colonel-General Alexander Postnikov, emphasized at the closing of the event, it is a matter of ensuring that the formation of requirements and the scientific and technical support of each of the projects are carried out centrally.

Of course, it is impossible to solve all the problems in a short time, as the military would like. However, in general, the situation no longer looks so hopeless as a few years ago.