In Moscow, at the round table discussed the creation of scientific units in the Armed Forces 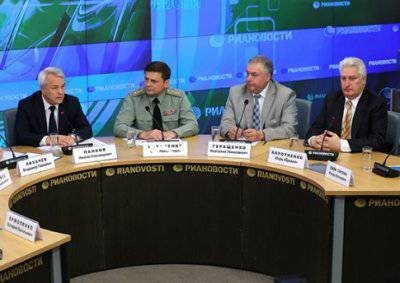 In the Russian International Information Agency "RIA News"a round table was held, the main topic of which was the creation of scientific companies in the Armed Forces.

The call for servicemen to scientific companies began on July 5. The first units have already been formed from students of MSTU. Bauman, MAI, MIPT, other technical universities.

The idea of ​​creating scientific units in the Armed Forces provides for attracting students to carry out scientific work in the interests of the Russian Defense Ministry during their service in the army.

One of the main issues that interested all participants of the round table and caused an active discussion is the principles and criteria by which the effectiveness of the scientific work of military personnel in such units will be assessed.

As Nikolai Pankov explained, “it is hardly worth relying only on commander's assessments — in this case, it is very important how the work of military personnel is assessed by supervisors and scientific consultants.”

In turn, Oleg Ostapenko explained that no one would immediately demand a result. "The sequence of solving a given task or a scientific problem is important here," he stressed.

He also noted that "the work of each soldier will be evaluated separately, and from such assessments the final one will be formed for the whole company".

Oleg Ostapenko said that the Ministry of Defense will also create a naval scientific company, which will be formed from students at specialized universities.

According to him, the circle of its main tasks will include, in particular, "developments in the interests of the military department in the underwater, surface and robotic areas."

In addition to scientific companies of a technical nature, the possibility of creating scientific units of a humanitarian profile is being considered. One of them can be created at the Central Archive of the Ministry of Defense of Russia.

"We are now actively working in this direction. Here you are both military sociology, and psychology, and история"- said Nikolai Pankov.

“Perhaps history is the first. Let the young specialists study the history of the Second World War, let their scientific work be connected with working out irrefutable arguments against historical falsifications that today breed both in Russia and abroad,” Nikolai explained his thought Punks.

The participants of the round table were also concerned about the question of whether traveling abroad would be limited for servicemen of scientific companies.

As Oleg Ostapenko explained, "there are certain restrictions, but they are not related to going abroad, on the contrary, they are possible, because you can't boil in your own juice, you need to share experiences, know what the scientific community of the world is doing."

As for the exact number of scientific companies that will be created in the Russian army, it has not yet been determined.

“We didn’t count the number of scientific companies, we went according to the principle: better is less and better. To begin with, there will be four such companies,” said Nikolai Pankov.