July 12 2013
48
The Democratic People’s Republic of Korea is known for its responsible attitude towards the release of information. News about the state of the armed forces of this country almost always are only evaluative in nature, and the first information about the new military equipment often appears only a few years after its appearance. In such a situation, any information attracts much attention to the interested public. A few days ago, the South Korean website Jajuminbo.net, known for its loyal attitude towards North Korea, published interesting information. One of the journalists of this site managed to get into the Pyongyang Museum of weapons and military equipment of the Korean People’s Army, opened last spring. 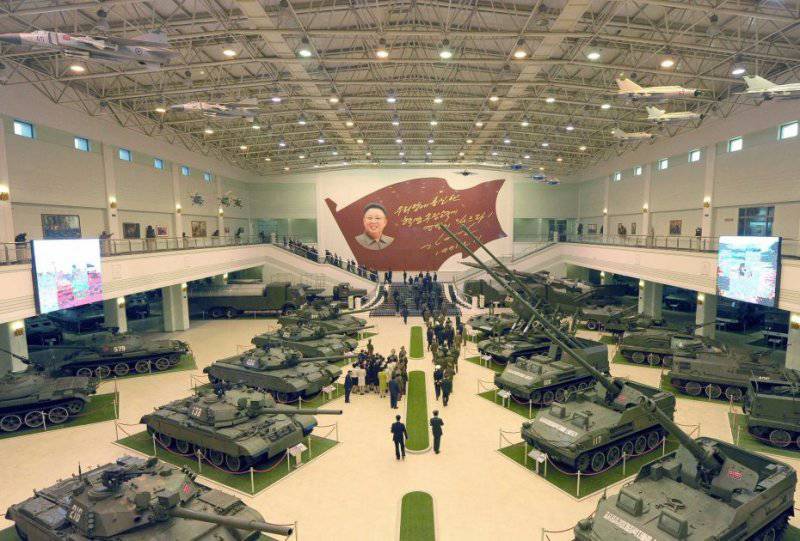 Previously, only a few photos with the general plans of the museum were available to the public. Now, the author of the publication on Jajuminbo.net was able to announce more detailed information on the weapons samples presented at the exposition. Unfortunately, photography at the Museum of Arms and Military Equipment is prohibited, but a Korean journalist was able to remember a number of interesting things. First of all, it is necessary to note the fact that finally the official names of North Korean armored vehicles got into the public domain. Until today, conventions have been used everywhere, which had almost nothing to do with real names. Now it is reliably known that North Korean Tanks are designated according to the year of creation.

It should be recalled that the DPRK uses its own chronology, the so-called. The Juche calendar, whose starting point is Kim Il Sung's birthday. For convenience, we will use the more familiar numbers of the Gregorian calendar used in our country.

The date of commencement of the construction of its own armored vehicles in the DPRK is 1967 year. This figure is noted in the name of the “Light amphibious tank model 1967 of the year”, which is a copy of the Soviet PT-76. Until now, a certain number of such tanks remain in parts of the North Korean armed forces. A year after the start of service of these amphibious tanks, the fleet of North Korean armored vehicles was replenished with another armored vehicle, namely the “Middle tank of the 1968 model of the year” - a slightly modified copy of the Soviet T-55 or the Chinese “Type 59”.

The next update of the equipment of the DPRK armored forces took place in 1976, which affected the name of the new tank accordingly. “Medium tank arr. 1976 of the Year ”was a licensed copy of the Soviet T-62, produced by North Korean enterprises. This fighting machine also received the name Chonma. As indicated on the plate in the museum, one and a half hundred "Tanks of the 1976 model of the year" in the first half of the eighties went to serve in Iran.

Five years later, the Korean People's Army received a new "Light amphibious tank model 1981 of the year." Abroad, this machine is widely known under the names M1985 and PT-85. An interesting fact is that the western symbols of this tank reflect the year in which foreign experts learned about the new Korean development. It is easy to see that the DPRK has successfully concealed its new amphibious tank for almost five years. According to Western intelligence reports, the tank model 81-th year was created based on the modified chassis of the armored personnel carrier VTT-323. In addition, the project used some technical solutions borrowed from the Soviet tank PT-76.

In the early nineties, Korean tank builders modernized the medium tank Chonma arr. 1976 of the year. An armored vehicle named Chonma-2 was put into service in the 1992 year. Perhaps the most interesting aspect of updating a licensed copy of the Soviet T-62 was the increased level of protection. According to the information plate of the museum, the armor of this tank, combined with the applied dynamic protection, can withstand a penetration of a cumulative projectile with armor penetration of about 500 millimeters.

Interesting is the location of the tanks in the corresponding hall of the museum. Ten of the armored vehicles are divided into two groups, standing in two rows. At the same time in the same row placed armored vehicles, created in the past decades, and all five tanks of the second row were designed during the last 10-15 years. Perhaps this arrangement of tanks museum workers tried to demonstrate the latest achievements of the North Korean defense industry. On the other hand, as far as is known from the available photographic materials, in the hall with heavy armored vehicles in all rows, regardless of class, there are five cars each.

Four of the tanks presented in the series with the new machines belong to the Chonma family. So, the main tank Chonma-98, created in 2000, has a combat mass of 38 tons and carries a solid booking. The combined frontal hull and turret packs are said to have a level of protection equivalent to an armor plate with a thickness of 900 millimeters. Other tanks of the family differ from each other in equipment and type of weapons. In addition, their combat weight varies slightly: the Chonma-2014 tank of the 2001 model weighs 38 tons, and the Chonma-215 and Chonma-216 2003 and 2004 respectively 39 tons.

The newest of the tanks presented in the Museum of Arms and Military Equipment of the Korean People’s Army is currently the Seon'gun-915 armored vehicle, created in 2009 year. The declared characteristics of this tank look quite interesting. So, with a combat weight of about 44 tons, the power density is about 27 horsepower per ton of weight. Thus, in the engine compartment of the tank is the engine power 1200 hp This sharply highlights the Seon'gun-915 against the background of the rest of the North Korean armored vehicles. Thanks to such a powerful engine, the tank accelerates on the highway to 70 km / h.

The native armor of the hull and turret of the Seon'gun-915 tank is equivalent to an 900-mm plate. In addition, additional dynamic protection is used, providing a level of protection at the level of 500 millimeters of homogeneous armor steel. The barrel armament of the new tank consists of one 125-mm smooth-bore gun and a CPV anti-aircraft machine gun. In addition, a gun launcher for two Bulsae-3 anti-tank missiles (presumably, an analogue of the Russian Kornet anti-tank missile system) is mounted above the cannon mask, and the Hwa'Seong Chong anti-tank missile launcher (possibly a copy of the Soviet / Russian "Needle"). The Seon'gun-915 tank is allegedly equipped with modern night vision devices, a laser range finder, a digital fire control system, and the like. equipment inherent in modern armored vehicles.

Tank Seon'gun-915 has long been known to specialists and lovers of military equipment, but in most of the materials it carries the symbol Pokpung-ho. Museum staff emphasize that this name has no relation to reality. However, the question of the name of a particular combat vehicle is of almost no interest, especially compared to other aspects of North Korean tank design. Specialists from all over the world are primarily interested in the number of tanks available in the armed forces of the DPRK. According to Jajuminbo.net referring to the Museum of Arms and Military Equipment, from 2005 to 2012, the defense plants of North Korea built 900 tanks of new models. Such figures - if, of course, they are true - can say a lot about the state of the North Korean defense sector.

Unfortunately, the specific information policy of official Pyongyang does not allow to fully analyze both the new or old tanks themselves and the state of the entire Korean People’s Army as a whole. Answers to the most interesting questions remain top secret and are not subject to disclosure even within the country. One of the consequences of this is the inability to verify certain figures stated on the plates in the museum and quoted by the journalist Jajuminbo.net.

And yet, even the available information allows us to draw certain conclusions. Despite the lack of information, a steady impression is created that the DPRK was still able to create a serious main battle tank, the capabilities of which are quite high, although they do not allow competing on equal footing with leading foreign models. As for the other North Korean tanks, created and built before the newest Seon'gun-915, they vividly show the desire of North Korea to have strong and modern armed forces even in the existing economic and political conditions.