In the future, denied. The fate of Russia's only SKShT manufacturer for the needs of the Ministry of Defense remains unclear

July 13 2013
58
The Bryansk Automobile Plant (BAZ) currently supplies the Russian army with special wheeled chassis and tractors (SKShT) for the installation of weapons and military equipment. The plant’s leadership does not stop its vain attempts to draw the state’s attention to the approaching collapse of the military production unit. 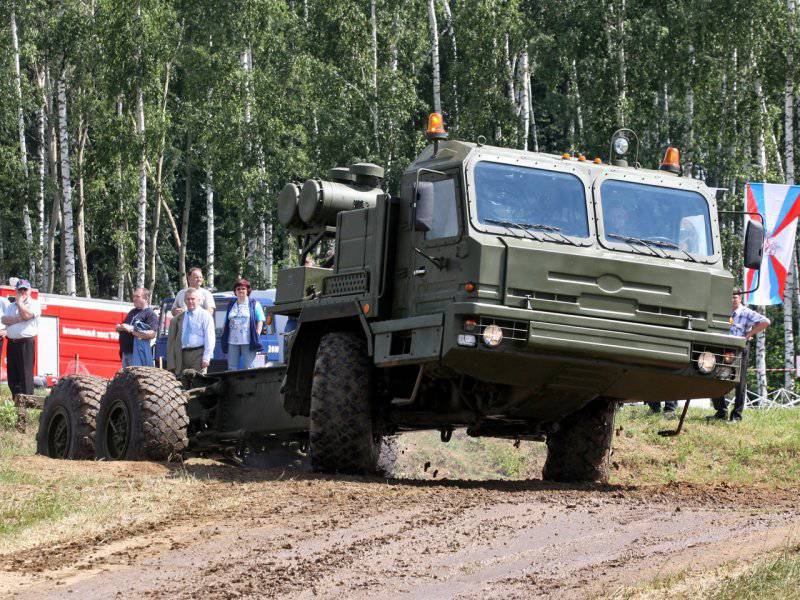 Weekly "MIC" published a chronology of the main events of BAZ. Recall, despite all the organizational problems, BAZ continued to work on the new Voshchina-2 family: the requirements were coordinated, the costs were clarified. In 2007, a contract was signed with the Ministry of Defense to develop a new SKShT family.

However, despite the signed contract, serious problems arose with the financing of the work. The plant received less than a quarter of the amount specified in the contract. And in 2008, the new head of the GABTU, Lieutenant-General Nikolai Ershov, in general, stopped all funding for the Voshchina-2 ROC. Then it was decided not to procure the BAZ-6403 truck tractor developed on an initiative basis and adopted for the supply of the Russian Armed Forces, but instead to purchase the KAMAZ-65225 that did not pass state tests.

Thus, BAZ once again found itself in a difficult position. However, the most surprising at this moment were the new rules for creating BAT, established by the Ministry of Defense. From now on, the main factor determining the fate of this or that development is the attitude towards it by the heads of the power department. If you like - we buy, if you don't like it - we do not buy. They did not pay attention to such trifles as TTX and compliance with the requirements of basic documents.

Most vividly such a policy manifested itself in stories with the chassis for ZRPK "Pantsir-С1". The fact is that the KAMAZ-6560 chassis, selected by the military leadership, was originally created, like all trucks, for normal cargo transport operations. The family of increased payload vehicles to which KAMAZ-6560 belongs is not developed according to the TTZ military. That is, KAMAZ-6560 does not even apply to BAT. Thus, this chassis does not correspond to a number of OTT, TTT, GOST B, GOST RV. Perhaps the key requirement of the military is the ability of the chassis to move along all types of roads and terrain sections. KAMAZ-6560 does not meet this requirement. It is surprising that they do not even hide the fact that this equipment was made as an export product, and not for the needs of the army. In addition, the Pantsir-С1 ZRPK on the KAMAZ-6560 chassis has many other disadvantages. We can note the insufficient overall width and high location of the center of mass, which does not allow firing of guns on the move in the transverse direction relative to the movement of the chassis. If such a shooting is carried out, the ZRPK will simply turn over. The large loading height of the chassis also makes it difficult to fit into the railway and air dimensions (the complex must be disassembled before loading). There is a lack of permeability due to the use of continuous bridges, dependent suspension, insufficient overall width. The tests also revealed a lack of smoothness, which is very important for accurate shooting, and in all directions. Another disadvantage is the low average speed of movement over rough terrain. In addition, the use of imported components and assemblies (KP, RK company ZF).

In 2008, the installation of the BM of this ZRPK was made on the BAZ-6909-019 chassis. Tests have shown that the use of the Bryansk chassis eliminates all of the above drawbacks, and the dynamics, throughput and smoothness of the course also increase significantly. The only reason why the army did not receive the new ZRPK on the BAZ chassis was the interests of KAMAZ, which for the military department turned out to be more important than the combat capabilities of the new technology. However, this KAMAZ preferences are not over. The Ministry of Defense has made it clear: from now on, no research and development on the creation of BAT will be funded, the military will be waiting for initiative development. The only exception, as it is easy to guess, was made for KAMAZ, which is still mastering an enormous budget, fulfilling the ROC Platform-O. At the same time, negotiations began on the purchase of equipment in the NATO countries.

At the end of June, the correspondent of the weekly Military Industrial Courier managed to visit BAZ at the invitation of the company's management in order to assess the state of production with their own eyes and talk to its employees.

Seen is difficult to give a clear assessment. On the one hand, the existing production facilities are fully loaded with work within the framework of the state defense order, and on the other hand, there are consequences of ill-considered decisions of both the top political leadership and the Ministry of Defense. If during the heyday the company worked around 18 000 people, now there are only 1500. Of the eight large workshops in the work of three, the rest are abandoned and gradually destroyed. But as it turned out, this situation is significantly better than the one that was a few years ago.

Active demand from the Armed Forces of the East Kazakhstan region at the SKShT of the Bryansk plant allowed to load the enterprise and partially improve the economic situation. A few years ago, the owner invested funds to upgrade the company, but they are clearly not enough. Currently, the workshops are filled with obsolete machines and other equipment, where BAZ employees continue to produce their unique chassis. The plan for the 2013 year provides for the production and delivery of the 159 SKShT to the customer. In total, supplies are painted up to and including 2015. At first glance, everything is not so bad. But if you look at the situation in more detail, it begins to cause serious concerns.

The fact is that since the signing of contracts for the supply of SKShT for the Ministry of Defense, all components of finished products have significantly increased in price, including tariffs not only for electricity and gas, but also for all purchased components and assemblies (engines, gearbox, etc.) . The situation is also complicated by outdated low-efficiency production equipment. Do not forget that the enterprise itself is within the strict price framework set by the Ministry of Economic Development for all manufacturers of defense products. As a result, each chassis comes with a loss, the total size of which was 95 million rubles in 2011-m and 27 million in 2012-m. Thus, a paradoxical situation arises - the greater the volume of production, the greater the losses. Considering that the plant supplies unique chassis, which have no analogues in Russia, the question naturally arises: why the government, which allocates huge funds for the technical re-equipment of the military-industrial complex, will not help BAZ with the renewal of fixed assets? The answer will be quite simple: there is not a single CJSC BAZ at the disposal of the government, that is, the plant is completely private and is not included in the list of strategically important enterprises of the military-industrial complex. That is why the state is not in a hurry to invest in the renewal of production. At BAZ, it was estimated that the minimum required volume for modernization exceeds two billion rubles.

Here we need to make a small digression and tell about the second component of the production activity of BAZ. We are talking about special crane chassis, which the plant was actively engaged in after joining the Independent Association of Machine Builders. It is important for the reader to know that NAMS, in addition to BAZ, includes Ivanovo's Avtokran OJSC - a manufacturer of automobile cranes, CJSC Gazprom-Kran, which manufactures hydraulic cranes, OJSC Raskat, and a number of other enterprises. They are united by one thing - the use of the chassis, created on the base. In addition, products for the civilian sector are highly profitable. If you take this into account, it becomes obvious that the owner is more interested in producing crane chassis for enterprises belonging to the association than in the unprofitable production of SKShT for the Ministry of Defense and only current contractual obligations allow to continue production for the needs of the army. An indirect proof of this is the fact that the owner has carried out a large-scale technical re-equipment of Ivanovo's “Crane”. That is, there is no doubt that at the BAZ (in the absence of government support), the civil sector will be given priority.

It would be logical to assume that if the Bryansk plant is actively engaged in the renewal of fixed assets for the production of new crane chassis, then the production of SKShTs for the Ministry of Defense can be continued at the same capacities. But, unfortunately, it is not. The fact is that the development of new crane chassis was mainly reoriented to the use of purchased automotive components, including foreign ones, and foreign specialists were also involved in the development.

The Bryansk plant continues to manufacture chassis and tractors of the Voshchina-1 family. On the conveyor is the assembly of such samples as BAZ-6402, BAZ-6909, BAZ-6910. At the same time, the state refused to give the Bryansk plant an order to develop promising samples of BAT, despite its many years of experience and numerous developments on this topic. KAMAZ, which had never dealt with this direction, took all the financing. The auto giant from Naberezhnye Chelny was also commissioned to create a new chassis for the Strategic Missile Forces, which, according to the idea, would have to change the products of the MWTP. And this is taking into account the fact that there are foreign companies among the owners of KAMAZ OJSC.

At the same time, the HPV-2020 provides for the development and production of such advanced weapons systems as C-500, Vityaz, and a number of others, which provide for the use of SKSHT of the Bryansk plant, that is, there is a need from the lead contractors. However, no one can guarantee whether the owner of BAZ will continue this production without state support at a loss. And if business interests are respected, then new systems and armaments will simply have nothing to place, and Russia will lose the only SKSHT manufacturer for weapons and military equipment.