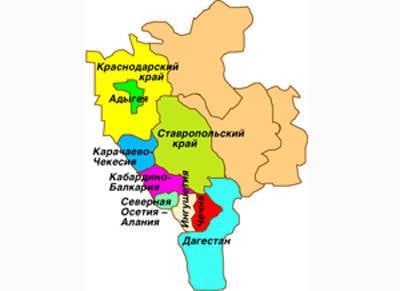 Exactly 50 years ago, just in time for the beginning of the second half of 1963, the “redrawing” of the borders of the regions, territories and autonomous republics of the Lower Volga region and the North Caucasus ended.


This “great repartition” was launched in the second half of 1950's. in connection with the restoration of a number of autonomous republics and regions, abolished in the middle of 1940. But still it seems that the main goal of the reform was still not the optimization of the administrative-territorial arrangement of such a significant for the country of the region. So, in 1956-1963. the territory of the Stavropol Territory was cut by almost a third, with the result that the region was “moved away” from the coast of the Caspian Sea. The Krasnodar Territory and the Stalingrad Region decreased by 13-15%, and the territory of the Astrakhan Region decreased by more than two thirds.

Decrees of the Presidium of the Supreme Council of the RSFSR in April 1962 and in February-June 1963 finally determined the interdistrict borders in the North Caucasus and Lower Volga national autonomies. By these acts, the central authorities secured the belonging of many Russian regions to the same national autonomies. But before these republics (and other administrative entities) in the second half of 1940. (Checheno-Ingushetia, Kabardino-Balkaria, Kalmykia, Adygea, etc.) were abolished; these regions did not exist in their composition.

As part of Dagestan, for example, was a vast area located on the coast of the Caspian Sea with a predominantly Russian population.
Previously, it was partly part of the Stavropol, Astrakhan and Grozny regions of the RSFSR: these are the Caspian Kizlyar and Tarumovsky districts of present-day Dagestan. And not only all the Caspian regions of the Astrakhan region, but also some of the Volga regions of this region, as well as the Stalingrad region and Stavropol, were included in Kalmykia.

Something similar was observed in the early to mid-1920 years, when, for example, Petrovsk-port became Makhachkala (in honor of the Dagestan Bolshevik); Kamennomostsky was renamed Khadzhokh (in the south of the present Adygea), Vladikavkaz - in Dzaudzhikau, Stepnoi - in the city of Elista (Kalmykia); the resort town of Sernovodsk was transferred to the Mountain Autonomy (later Chechen-Ingushetia).

And in 1930 - 1940. Only some of the boundaries between autonomies and Russian regions / territories, as well as some names of cities and territories, were restored in the former “reading”. In 1956-1963 The 1920's campaign, albeit on a slightly smaller scale, was actually repeated.

The author does not at all advocate a new redistribution of Russian borders, since he is well aware of the negative consequences that this may have. Nevertheless, it should be emphasized that all previous divisions, starting with 1920, infringed upon the interests of mainly Russian and Russian speakers, which today affects the socio-economic situation in these areas. As for the North Caucasus itself, the very favorable attitude of the “center” to an increase in the territory of the restored national autonomies allowed their leadership, what is called, to dictate a policy towards the entire North Caucasus.

In particular, direct and indirect subsidies from the RSFSR budget in the North Caucasus from the middle of 1950-x were distributed as follows: 65-75% were directed to national autonomies, the rest to Russian regions and territories.
As a result, the facts of overt Russophobia were increasingly manifested there, and alienation between Russians and representatives of North Caucasian nationalities grew (especially in Chechen-Ingushetia, in a number of districts of Dagestan, Kalmykia). In the middle of 1950-x - mid-1980-x, more than half of Russians and Russian-speaking residents who lived there in 1944-1956 left the region, including Kalmykia. Here is an excerpt from the report of the North Caucasus Federal District “The North Caucasus is the Russian factor (2012):“ ... For the first time, the decline in the number of Russians in the North Caucasus was noted already since the 60 of the last century, prompted by the return of Chechens and other deported ethnic groups after rehabilitation 1956 year. An important signal in this regard was the “Chechen unrest” of the 1958 of the year, which occurred immediately after the “Khrushchev's” rehabilitation of the peoples evicted during the Great Patriotic War and had a clear ethnic nature. These events clearly demonstrated that ethnicity as a factor is present in Soviet reality, and ignoring it promises the most serious consequences. From the same moment, there has been a gradual reduction in the share of the Russian population in Chechen-Ingushetia, which by the 1970 year was 14,5%. ”

It is not surprising that the economy and social sphere of the “ex-Russian” regions gradually came into neglect, unlike other territories, in the national autonomies. Say, the degradation of agricultural land remains today the maximum (up to 70-80% of the area) in precisely those areas of national autonomy that were transferred to them in the middle of 1950-x and the beginning of 1960-x. Perhaps the most striking example of this is the Black Earth (Caspian) region of Kalmykia, which until the middle of the 1950. Partly was part of the Astrakhan region and Stavropol. It can be said that from the end of 1950, similar problems accompany the socio-economic situation, in particular, northern (Caspian) Dagestan and Kizlyarshchina (north-western Dagestan), more precisely, the territories that were disconnected from the Grozny region and Stavropol the edges.

According to the Kumyk Mir Research Foundation (2012), when transferring a number of territories to Dagestan “... the opinion of the local old-Russian Russian population was not taken into account, despite the fact that it constituted an absolute majority. And the accession of the Kizlyar region was motivated by the fact that national minorities, which were not even specifically named, feel not very comfortable there, that ... they are organically alien to the Russians in terms of spiritual and material culture ... ” Moreover, it is especially noted that “the inclusion of Kizlyarschina with the Russian population living in Dagestan since the XNUMXth century was contradictory historical Act: since the expansion of the administrative borders of the autonomous republic in Soviet times was perceived there as an expansion of ethnic borders. Later, as a result of the settlement of the Kizlyar region by settlers from the mountains, relations between the indigenous population and the highlanders became more complicated. And this problem requires its resolution ... "

The aforementioned “expansion of ethnic borders” is not an exaggeration.

The rapid growth in the number of autochthonous population from the middle of the 1950-s in the same Chechen-Ingushetia, primarily in Dagestan, soon demanded "additional" territories and in adjacent regions, especially in Stavropol.
According to Maya Aliyeva (Stavropol), an expert at the Center for Migration Studies of the Russian Federation, “in 1960-1970 the migration of the peoples of Dagestan to the Stavropol region intensified. Here, the Dagestanis resettled in those areas where sheep farming was the main specialization. Due to this, in the eastern districts of the region the number of visitors from neighboring Dagestan grew rapidly. Large Dagestani families intensively settled on new places, compactly concentrating in such areas as Neftekumsky, Levokumsky, Arzgirsky, Turkmen ”(east and northeast of Stavropol in its new, reduced, end 1950 years. - A. B.).

Moreover, up to 80% of the population of this area and today are Russian (up to the middle of 1960-x - almost 90%). Appeals of the Krasnodar Regional Administration and local residents about this decision by the “center” were not taken into account.

Well, how the fate of the Russian and Russian-speaking population in the Chechen-Ingush Republic is well known. Back in 1958, this population, for the most part, strongly protested against the actual anti-Russian policies of local and central authorities. And this opposition ended with interethnic actions and the use of military force, mainly against Russians and Russian-speakers in Grozny. In short, there is every reason to assert that many socio-economic problems in the North Caucasus and the Lower Volga region stem from distortions in the national-administrative and socio-economic policy of the “Khrushchev’s” leadership in the middle of the 1950s - early 1960s. Today we can only ascertain this fact.

Ctrl Enter
Noticed oshЫbku Highlight text and press. Ctrl + Enter
We are
How Crimea gave Ukraine. On the "white spots" in the history of the transfer of the peninsula from the RSFSR to the Ukrainian SSRStalingrad Military Intelligence Battle
48 comments
Information
Dear reader, to leave comments on the publication, you must to register.