To retain power, Putin must clear it of liberals 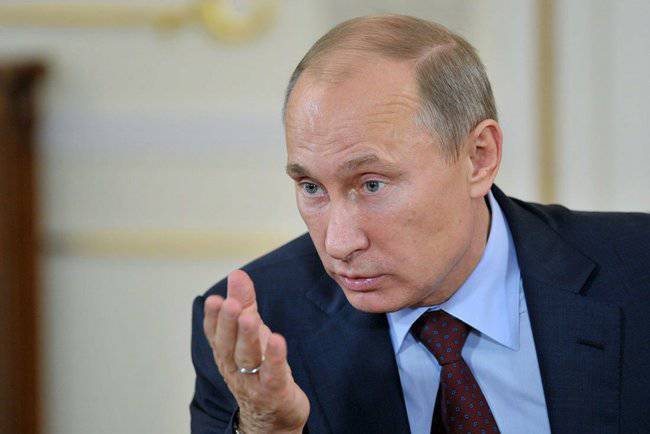 They are, in fact, engaged in direct sabotage of his instructions.


“God brought the truth to the truth!” We often spoke this phrase in childhood, when, after some not entirely correct action of the opponent, for example, a hard challenge to an honestly missed goal, he unexpectedly quickly missed several more. Of course, God has nothing to do with the current situation, but somehow it reminds all of this.

But before turning to the main topic, we need to recall the main conflict of modern Russian politics. It lies in the tough contradiction of the government and the Central Bank to President Putin regarding the direction of the Russian economy. The government and the Central Bank categorically refuse to change the liberal principles of economic management, while Putin absolutely needs quite decent (at least 5% per year) growth. It is impossible to agree here, since liberal principles today can only give a recession.

It should be noted that Putin himself, apparently, still does not fully understand the entire antagonism of his relations with the Russian liberals, who control the government and the Central Bank (in particular, with Shuvalov and Nabiullina). Most likely, this is connected with the world outlook that I somehow developed in one of my speeches. There is such a concept that people look at the world from one of three positions: either the “warrior” or the “priest” or the “merchant”. This is precisely the point of view: the “warrior” should not fight at all, and the “merchant” should not trade. It is just that the “merchant” looks at the world from the point of view of money, while the priest is looking for sacred foundations in everything.

So, Putin, in his understanding of the “city and the world”, is most likely a “merchant”, and for this reason, he is looking for money as the driving force of any events and processes. Accordingly, he believes that those whom he gives to earn should be faithful to him. And they, in turn, have their own considerations: after all, these people largely appeared in power before Putin and earned their capital before him. They are sincerely convinced that they will remain after Putin; they know for sure that they receive American money, and Putin is only an optional intermediary. Finally, they feel the heavy pressure of the sacred power of the sole world superpower, and therefore they cannot count on their loyalty to Putin. The only trouble is that in order to understand this, you need to move to the position of "warrior" or "priest." It should be noted that Russia successfully managed only from these two positions. Stalin and Ivan the Terrible were “priests”, Peter I and Catherine II were “warriors”, and the “merchants” always had problems in Russia.

However, we are already moving away from the main theme, which is that the liberals, although they do not recognize Putin as a real leader, must reckon with reality and at least pretend that his instructions will be executed. Putin is demanding economic growth, and they promised him oath that this growth will be. There is only one problem: liberal growth cannot provide this growth. Moreover, they have already led to a real downturn in the economy.

At the first stage, the liberals tried to portray that this was not a recession, but simply a slowdown in growth; they began to devalue the ruble in order to support the economy (although they still did not compensate for it the losses associated with their own project of Russia's accession to the WTO), but nothing has yet come of it. We understand that this will not work, but it is difficult to prove it publicly, since the whole system of economic propaganda is in the hands of the liberals. The trouble with them, in fact, only one - it is the economy itself, which continues to fall.

And as it falls, optimistic statements by liberal government leaders addressed to Putin (which increasingly resemble expressions like “Well, have you gotten bogged down with your stupidities? Get off your message!”) Begin to be accompanied by leaks of real information about the state of the economy. The Utro.ru website, which, like RBC, belongs to the opposition president, but to Prokhorov, who sympathizes with government liberals, writes the following: “The Ministry of Economic Development officially recognized that the Russian economy is creeping into recession, and there is no way to reverse this trend. According to Deputy Head of the Ministry of Economic Development Andrei Klepach, the ministry lowered its forecast for GDP growth in 2013 from 3,6 to 2,4% on Thursday. It is noteworthy that such a significant reduction will occur when the oil prices are 105 dollars per barrel, which is higher than the budgeted 97 dollars per barrel. The reason for the sharp deterioration in the forecast, the deputy minister called almost zero export growth.

The next blow was data on capital outflow, which, according to Klepach, at the end of 2013, will be 30-35 billions of dollars (earlier in the official forecast of the Ministry of Economic Development, it was assumed that this figure would not exceed 10 billions of dollars). Up to 4,6%, the forecast for investment growth was lowered, which the deputy head of the ministry himself was forced to call low. The optimistic forecast for production growth for the current year was only 2%. Retail turnover growth, which has always acted as a growth locomotive, was downgraded from 5,6 to 4,3%. At the previous level, only the inflation forecast is maintained, which in 2013 will be 5,8%. ”

Speech by Klepach could mean that the authorities finally decided to stop driving people by the nose. Despite all the difficulties and problems, the Russian economy has not yet entered the recession, but it is only a matter of time. In this situation, it is better to make it clear to the public in advance that things are not going well in the economy, so as not to explain why the government overslept the recession again. ”

We note here that the Prokhorov website speaks about power in general, and not about his beloved government, but the main thing is different here: officials accepted the fact that a decline is inevitable in the country. They might have already recognized him (since everyone who deals with the real economy sees the state of affairs with the naked eye), but then the previous lies with the overstatement of economic growth will come to the surface, and the recession will be painfully fast. Here they are and "pull" in the fall.

Note that the campaign to “otmazyvany” liberal experts, which, most likely, will enter the large-scale stage by the fall, is already beginning. In the above article it is written: “For the experts, the revelations of Klepach did not come as a surprise. The fact that the economy has entered a period of stagnation has been talked in the expert community quite a long time ago, and the statements of the president and prime minister about the need to ensure a five-year economic growth rate of at least 5% due to modernization and innovation today are not taken seriously. ”

This is not only an explanation of the fact that there was no deception on the part of the government, but also an attempt to impute to all the deliberately false position that there can be no economic growth. In fact, the last sentence should be read like this: “It’s impossible to ensure economic growth by liberal methods!” Well, we knew this a long time ago, unlike government experts, as well as the fact that illiberal methods (specifically, import substitution) will give an excellent result - 7 growth -8% for at least ten years.

The only trouble is that Putin utterly dislikes to give up "his", and as long as he believes that the liberals in the government are precisely that "his", nothing will change. And in order for his position to change, he needs to try to look at the world from an alternative point of view, to become not a “merchant”, but at least a “warrior”. This is the only way to see that the liberals in the government do not at all regard him as “their own”, they are subject to the authorities, and this authority has nothing to do with Putin (and Russia).

Will happen история With economic growth in the country, the key point that will change Putin’s position is the question. But one thing is clear: in the conditions of a constant economic recession, it will be extremely difficult for him to retain the mandate for power received from society.

Ctrl Enter
Noticed a mistake Highlight text and press. Ctrl + Enter
We are
About Stalin and KhrushchevWhat we lost
154 comments
Information
Dear reader, to leave comments on the publication, you must to register.