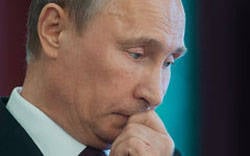 Staying away from Russia will not work, you will have to join one of the camps


A few days ago I had a long conversation with Dmitry Anatolyevich ... no, do not think of anything - Zhuravlev, who told me in detail about his concept of “homogeneous elite”. I will not get into subtleties (I think that DA himself can tell about this, and he also tells in some of his interviews), I will only note the main conclusion. Its essence is that in modern Russia there is only the initial formation of the elite, it is still completely homogeneous. This is all one group, a sort of broth, in which the internal connections and understanding of their unity are much stronger than the internal contradictions. Therefore, in principle, it cannot become a tool for the development of a country, since such development requires powerful intraelite contradictions - which, by the way, can only become the basis for a normally working concept of separation of powers.

Theoretically, this concept is exactly the opposite of my views, which say that tough contradictions are growing inside the Russian elite, but our conversation showed that these differences are not really fundamental. The fact is that I describe the objective factors that influence intraelite relations, but the whole trick is that the elite itself categorically refuses to recognize these factors, more precisely, their scale and a very long duration.

In part, this may be a consequence of a developed instinct of self-preservation, since in today's crisis situation intra-elite wars may tear this very elite (more precisely, according to Zhuravlev, proto-elite) into small parts, with the subsequent disappearance of a greater number of them; partly due to serious limitations in understanding the situation. Or maybe for some other reason. But the fact itself, in general, takes place: the modern Russian “elite” fears a crisis, a people, Western special services - but by no means their own internal contradictions.

Yes, of course, Voloshin and Co. organized a “swamp process” against Putin. However, how quickly he was blown away and which, in general, not very serious people led him, testifies that the purpose of this whole action was not so much the destruction or overthrow of Putin as its restriction within the existing political system. That is, the main task of the "family" (in the broadest possible sense of the word - as the oligarchs of the formation of the 90's, the pre-Putin years) was not so much to break the system (which is already a serious intra-elite war), as to put a specific person in a specific framework.

We note that the fact that this did not work out just indirectly testifies to the fact that things are not going very well: ordinary, regular actions are not enough to bring the system of intraelite relations into a state of equilibrium. But the “family” used not quite regular actions: for the first time in 10-12 years, the resource of appeal to society was used to resolve intraelite contradictions.

Maybe everything would have ended in peace, even with the evolving crisis, but here there was one extremely important circumstance that directly affects the processes in our “proelit broth”. Circumstance is - the case of Strauss-Kahn. Again, without going into details: it was the revolt of the US bureaucracy against the global financial elite, which deprived it of its last major source of profit - the emissions of the US Federal Reserve. Just in case, I repeat: it was not the issue that disappeared, but the mechanism of its redistribution, which was not controlled by the global financial elite, but by the White House apparatus.

As a result, the global financial elite split into three groups - “money changers” (they are also “rotshilds”), “finintern” (they are also “lenders” or “alchemists”) and “Americans” (they are also “Rockefellers”; capital letters, As you know, I did not set it on purpose). And all these three groups are actively putting pressure on the Russian proto-elite to solve their goals. The task of “changing” is to ensure the creation in the Eurasian space of its own currency zone (conditionally, “ruble”), and they have placed the main stake on Putin (and on whom else?). Accordingly, their main enemies are the Russian liberals, whom the money changers, like other parts of the world financial elite, a few years ago were carefully holily and cherished, who work for the IMF (finintern’s coordination center) and for the US special services.

Today, the Americans no longer want the collapse of Russia (read the recent works of Brzezinski), but are extremely interested in Russia becoming a tool against China and, most importantly, in no case form its own currency zone, that is, remain in the dollar zone. As for the "Finintern", he has rather tactical than strategic interests in Russia, but the fact that he is against the creation of emission currency zones is unambiguous.

So, regardless of the contradictions between these groups, they strongly put pressure on our "protoelite" in terms of solving the most important task. The “money changers” need the ruble zone to be, and the rest is absolutely useless. Accordingly, Putin in various ways tries to impose integration tasks within the framework of the Customs Union and wider to the government and the Central Bank, and they not only refuse to do this, but also undermine what has already been done. If we were talking about purely internal affairs, then God would be with them (they would have understood the inside of the elite, and the contradictions would go nowhere), but considering the external factor, everything is not so clear.

Here it is necessary to add one more important circumstance. Whether Putin likes it or not, he is tightly associated with the integration theme. And there is no way to neglect this, since there can be troubles such as Russia’s demonstrative disregard for G7 or stories with Snowden, in which we look like whipping boys. There are other problems that we can get: for example, an Islamic explosion in the south of the country. In such a situation, we strongly need serious international allies. And who could they be?

If we are talking about the United States, then we need to throw the entire integration group out of power, handing over Kazakhstan and Belarus at the same time (the first to China, the second to the European Union) and finally losing the remnants of any international authority. If we are talking about "money changers", then you need to remove the "liberals." And there can already be no internal collusion here, since it is necessary to determine either one or the other basic platform. In general, "Rabinovich, or remove the cross, or wear panties!"

Actually, theoretically it would be possible to try to behave like Ukraine, that is, to sit on two chairs at once, which our elite has so far done. The trouble is that the issue of independent currency areas is fundamentally important for all international participants. Either there will be such zones, and then there will be no “finintern”, and “Americans” will lose a lot in international weight, or they will not be - and then there will be no “change”. Here, in the two years that have passed since the “Strauss-Kahn case,” everything has already been decided completely without us, and therefore we will have to join either one camp or another.

By the way, it is very interesting to look at the position of the “Americans” - the only force that will remain in any case, since the United States, in general, does not disappear anywhere (we do not consider alternative scenarios due to their low probability). They are quite ready to work with the current liberals, but there is serious information that they are already preparing a program to create "new liberals" who are not involved in any way with privatization, and therefore have electoral prospects in Russia. Since liberal ideas live in any society, in the event of a victory for “money changers” and stripping of the current liberal camp in Russia, this backup scenario will most likely be launched.

However, this is already a deviation from the topic - rather, an illustration of how seriously the participants in the process treat it. For us, it’s fundamentally important: the structuring of the “protoelite broth” in our country can happen much faster than everyone thinks, due to factors external to our elite and the country.

Ctrl Enter
Noticed oshЫbku Highlight text and press. Ctrl + Enter
We are
A great interview with Sergey Lavrov: about Ukraine, Obama and IranWhat you didn't want to know about England
Military Reviewin Yandex News
Military Reviewin Google News
54 comments
Information
Dear reader, to leave comments on the publication, you must to register.