Dzhokhar Tsarnaev: I am not guilty

July 12 2013
42
On July 10, the representative of the prosecution read out to Tsarnaev in court a whole series of seven points, for almost every one of which the accused can receive either a life sentence or an electric chair. Tsarnaev told the judge seven times that he did not admit guilt. Why? The American justice system is so arranged that whoever claims innocence can avoid the death penalty - unlike the one who admitted guilt. 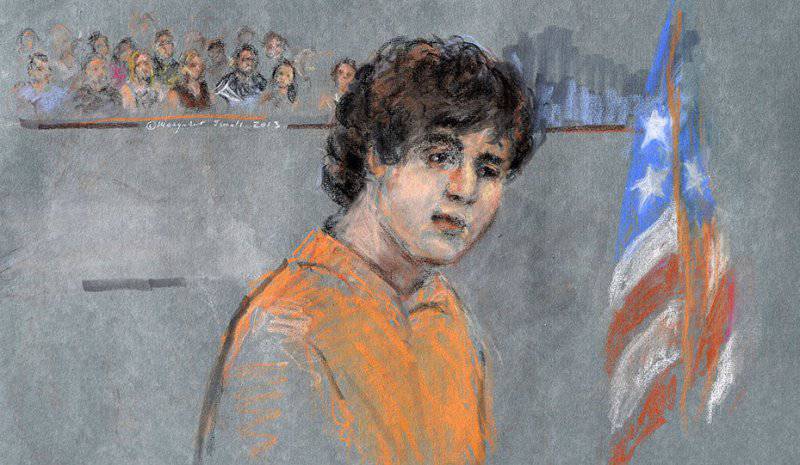 Eric Moskowitz, David Abebel, Milton Valencia, John Element (Boston Globe; source of translation - "InoSMI") indicate that the lawyer Judy Clark was going to make a statement about the denial of guilt on behalf of D. Tsarnaev, but the judge ordered him to answer independently.

“Seemingly indifferent to what is happening, Tsarnaev was dressed in an orange prison jumpsuit, the top buttons of which were unbuttoned, and a black T-shirt under it. His hair was shaggy, like in photographs published after the explosions. ”

Tsarnaev looked at the two women sitting in the courtroom, the authors of the material write. One was crying, and the other was holding a small child. When Tsarnaev was taken away from the courthouse, he sent a kiss to the women. The meeting lasted only seven minutes.

Prosecutor William Weinreb, after reading the charges, noted that "the maximum punishment is life imprisonment or the death penalty."

"Boston Globe" writes that at this meeting there were about a dozen people who had previously insisted that Johar was wrongfully accused of two explosions. The newspaper also reminds that Tsarnaev in a white prison van was taken to the courthouse by people who shouted slogans in support of him: “Justice for Dzhokhar” and “Give him back his freedom.”

The next trial will be held on September 23. A total of 30 charges have been filed against Dzhokhar Tsarnaev, seventeen of which entail the possibility of a death sentence. The death sentences in Massachusetts have not handed down 66 years (since 1984, they are forbidden to pass at the state level). However, the charges against D. Tsarnaev were made at the federal level, and therefore he could receive a death sentence.

The refusal of Tsarnaev due to the peculiarities of American justice is the only way to avoid the death penalty if the prosecution insists on it. This was told by the director of the Washington Center for the Death Penalty, Richard Dieter:

“At this stage, the statement of innocence will not change anything. It will allow more negotiations between the prosecution and the defense and will save options for the accused. If you plead guilty, then everything ends immediately, without winning anything and losing a lot of rights. ”

Dieter said that the jury must unanimously recognize Tsarnaev guilty. If they are not unanimous, the punishment will be replaced with life imprisonment. Finally, if the prosecution decides to seek a death sentence, the process will be delayed in time:

“Such cases can take at least a year. There will be many petitions, objections, experts ... Even starting with a death sentence, such cases do not necessarily end with them. ”

The submission also notes that the bill of indictment blames Dzhokhar Tsarnaev for the death of Tamerlan’s elder brother. According to investigators, he moved the car during an exchange of fire with the police.

It is also known from media reports that the prosecution considers Tsarnaev to admit what he wrote on the boat when he was hiding there after the exchange of fire. “Attacking one Muslim, you attack all Muslims at once,” - these are the words scratched on board by Johar. No other confessions of the accused are made.

One thing is clear: the case of Tsarnaev will drag on for a long time. First, experts predict "petitions" and "withdrawals." Secondly, the court will have to examine the testimony of several dozen witnesses. Thirdly, it is not known what line the defendant’s lawyer will adhere to (Judy Clark refused to answer the questions of reporters after the meeting) and whether something unexpected connected with the special services, for example, comes up during the process. Many bloggers, primarily American ones, do not share the prosecutor’s conviction of the guilt of the Tsarnaev brothers and consider the attack a diversion of the special services. In our times, when the CIA, the NSA and other agencies supervised in the United States by National Intelligence, were already nowhere to be discouraged, these versions have a right to exist.

In conclusion, we recall that the explosions at the Boston Marathon claimed the lives of three people. 260 man was injured and maimed. Many were left without arms and legs.

Observed and commented on Oleg Chuvakin
- especially for topwar.ru
Ctrl Enter
Noticed oshЫbku Highlight text and press. Ctrl + Enter
We are
Results of the week. "They stood to death like buttons!"Results of the week. "I remember here, but I do not remember here!"
Military Reviewin Yandex News
Military Reviewin Google News
42 comments
Information
Dear reader, to leave comments on the publication, you must to register.