How to make the "Fire Bird" from TT

July 12 2013
7
As is known, the Soviet Union provided maximum support to the Warsaw Pact countries by supplying them with their weaponas well as transferring production rights to armored vehicles, handguns, and so on. As a result, the USSR received little, but the contribution of foreign designers to the process of improving Soviet weapons was invaluable. Of course, far from always new branches of development of the same Kalashnikov assault rifle or other samples were useful, very often due to the race of increasing efficiency, convenience and reducing the price of production, reliability suffered, but there are exceptions when designers managed to upgrade the sample and get a result superior to the Soviet analog by characteristics. It was not so often, but still it was. In this article we will try to get acquainted with the Hungarian modernization of the TT pistol, which, in the opinion of many, is much more convenient in comparison with the original Tokarev pistol. It will be about the Tokagypt 58 pistol later known as the Firebird in the global arms market. 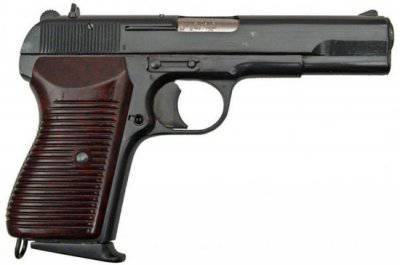 It all began immediately after the end of the Second World War, when the Soviet Union handed over technical documentation on the TT pistol of Hungary, and with it helped launch the production of these weapons. Already in 1948, the pistol was no different from the modernized TT was adopted by the People’s Hungarian Army, where it established itself mainly from the positive side, keeping all the known problems of the Soviet type. In fact, the proposals for modernization were before the start of production, but apparently they were in a great hurry to start production of weapons and adopt them. In addition, we should not forget that the pistol in the military environment personal weapon is still secondary, because the yard was the middle of the twentieth century. The opportunity to upgrade the gun from the designers appeared only after 10 years, when Egypt needed a weapon, though they hurried as a result, they flew, but more on that below. 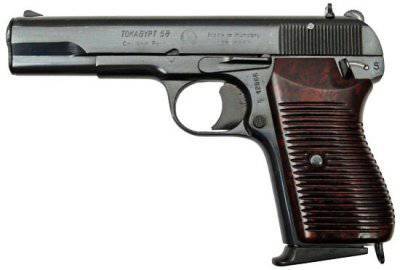 First of all, in the process of modernization, the ammunition with 7,62x25 and 9x19 was replaced as more common and effective when firing at unprotected means of individual armor protection. As a result of the replacement of ammunition, it was necessary to recalculate the automatic weapons, and not just get rid of the replacement of the barrel. Naturally, the automation system as a whole remained the same - the use of recoil energy with a short barrel stroke. They didn’t touch the trigger mechanism either, leaving it unchanged, but by adding it with a non-automatic safety device whose switch was located on the left side of the weapon above the pistol grip, which turned out to be quite convenient for switching with the thumb of the right hand. The frame of the gun was left unchanged, but the weapon got a more comfortable grip. Also the weapon shop was improved, which received a support for the little finger. 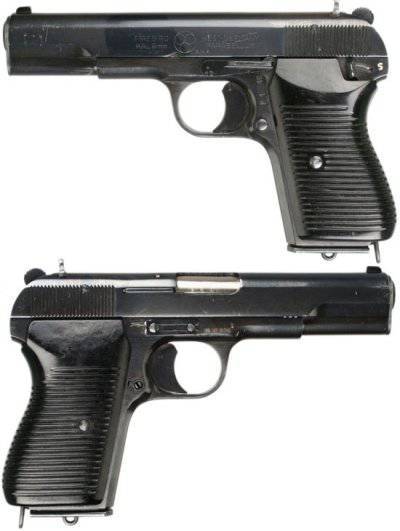 The result was a pistol chambered for 9x19 with the capacity of a single-row 7 magazine cartridges. The weight of the weapon was equal to 910 grams, the total length of 195 millimeters with the length of the barrel with 6 grooves 115 millimeters. In spite of the fact that, in principle, the weapon did not differ much from the TT, it was perceived with a bang, and they immediately enrolled in absentia among the best pistols of the time. In general, there is nothing surprising in this, because the TT is really a very good pistol and all disputes rest only on its ergonomics, the cartridge and the absence of a fuse, which was fixed by the Hungarians. Initially, the weapon was held under the name of TT-9Р, but it was quickly forgotten by deciding to reflect in the title that it was primarily TT, and also that it was intended for Egypt - Tokagypt. Despite a preliminary appreciation of the pistol in Egypt, he did not appear, since preference was given to the Beretta, and specifically the 951 model.

By the time the refusal was received in Hungary, they had already managed to stamp and pack more than 15 thousands of pistols into boxes, that is, the production costs were substantial. It would be possible to keep this weapon at home, but I really wanted to return the money, because this gun hit the world weapon market. It is clear that the “abyda” that the gun was not adopted by Egypt was large, and the preservation of the name of a particular country in the name of a weapon would be a wrong move. For these reasons, the weapon was renamed Firebird. Why the bird turned out to be fiery, and it is not clear where the birds were at all, but nevertheless the weapon was quite popular.

The fact that the gun was really good says that he held his position in the arms market until the 90-s, after which he was offered an updated version of the weapon under the designation T-58. In general, this version of the weapon can be called updated with a big stretch, the weapon was not updated, but simply supplemented with a set allowing the use of 9x19 and 7,62x25, as indicated by the inscription on the casing-bolt. In addition, it is worth noting separately an interesting stamp that appeared on the weapon in the form of a simplified coat of arms of the USSR. The weapon turned out to be weight in 910 grams, length 195 millimeters with a barrel length 115 millimeters. Magazine capacity is 7 cartridges 9x19 and 8 cartridges 7,62x25. There is information that in some versions there was no fuse switch, although the cutout for the switch stroke and even the marking of its position remained on the frame itself. 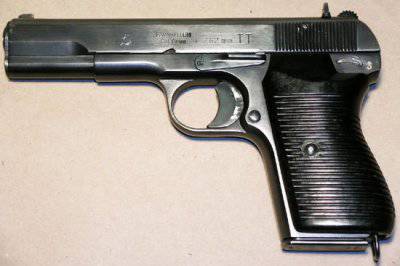 Many consider this gun one of the best among all variants of TT-shaped models, with which it is difficult not to agree. A relatively comfortable grip, a fuse, ammunition in the amount of reliability and simplicity of the original TT allowed this gun to become a truly reliable, safe, accurate and effective sample. Nevertheless, we should not forget about other models, including those that were developed by Tokarev himself, but did not go into mass production, and among them are a lot of very interesting weapon options that could take their rightful place with well-known domestic pistols.