Memo tankers to fight our tanks with enemy tanks, 1942 year 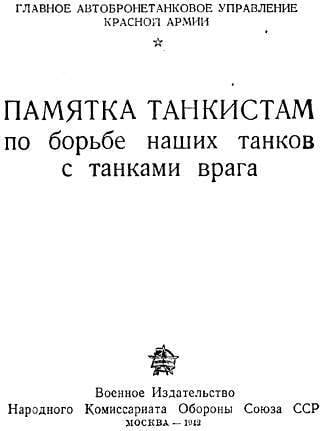 To fight the fascist tanks there are many means, but our tanks are still the best way to deal with them as highly mobile combat vehicles with powerful weapons and armor protection.

Our tanks have a number of advantages over German vehicles in armament and armor, and are a formidable force in the fight against enemy tanks. Fascist tankers are afraid of our heavy and medium tanks.

TANKMAN! REMEMBER ABOUT THE POWER OF THE WEAPONS OF YOUR TANK.

The artillery armament of our tanks, by its combat properties — accuracy, penetration and the destructive action of projectiles — can destroy or incapacitate any type of German tank.

45-mm tank guns pierce frontal armor of the main types of German tanks on the 200 — 300 m with an armor-piercing projectile, turret, aft and side armor — at distances to the 1000 m.

The most vulnerable places of all German tanks are: weapon, side and stern armor, viewing slots, holes for sights and chassis (Fig. 1). 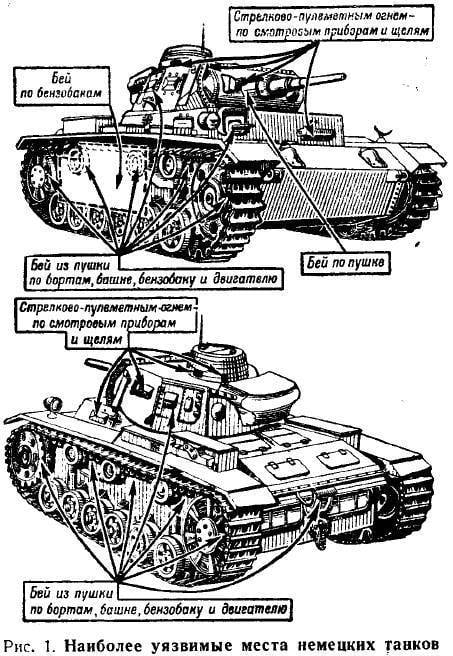 Only a well-trained and put together crew can successfully solve the problem of the destruction of enemy tanks.

Quickly act at the weapon! The production of a well-aimed shot at a new target should not exceed 15 — 20 seconds.

Prevent enemy fire with your accurate fire, this will ensure the success of the battle.

Tankman! Use every free minute to improve your combat skills, crew coherence and interchangeability.

In carrying out the task assigned to the subunit, lead the observation of the battlefield and the tank of the platoon commander, find targets, destroy them with fire. Open fire on tanks yourself and strive to position your tank in such a way as to hit enemy tanks at their most vulnerable places - on the sides or stern.

Found the enemy's tanks - lead a fire at the tank nearest to you with armor-piercing shells, and if not, then fragmentation, mounted on the high-explosive action; at the same time long lines of tracer bullets from a machine gun, point the target to other tanks.

At distances to the target above 600, lead the fire from the spot, and when approaching the target, be sure to use covers and masks (small bushes, etc.) for firing from the stops (fig. 2). On flat ground under enemy fire, fire a cannon from a short stop only in b — 8 seconds. and from the course of machine guns.

When firing at tanks aim coolly, aiming do quickly and accurately. From a distance of up to 400, guide the most visible vertical surface of the tank. At a distance of more than 400, aim in the middle of the front or aft of the tank.

WATCH THE RESULTS OF THE FOOT AND CORRECT THE FIRE

When firing at tanks over a distance of more than 800 m, when receiving an undershoot (flight), correct the range fire by increasing the scope, increasing (decreasing) it by one division.

At a distance of 800 m in range, correct the fire by removing the aiming point (Fig. 3).

In the lateral direction in both cases, adjust the fire by removing the aiming point; when the projectile deviates to the side, move the aiming point in the opposite direction by the deviation of the fracture (Fig. 4).

Do not shoot at a clearly struck target, but transfer the fire to another target closest to you.

When attacking the front edge of the enemy, pull out the fire initiative from the fascist anti-tank guns: be the first to fire from the 600 — 400 distance and a fragmentation projectile at the places where the PTO weapons may be. This will reduce the accuracy of enemy fire.

When you find an important and dangerous target, focus the fire on several tanks on it (fig. 5).

When attacking anti-tank guns and enemy tanks, maneuver on the battlefield, occupy a flank position in relation to the target, use shelters and masks to fire from the stops. 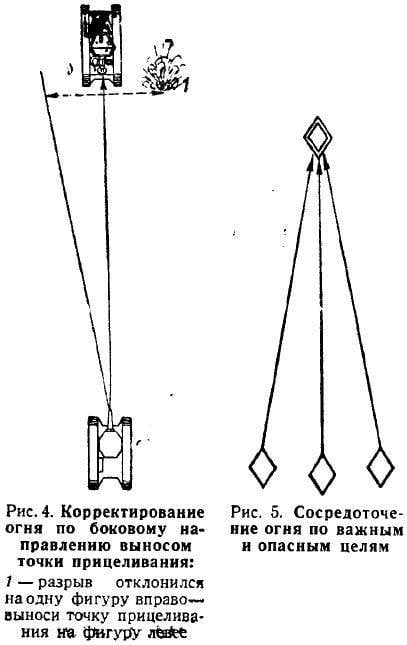 Watch the flanks and the places where the enemy can cover the tanks and throw them from there to the counterattack.

Keep in touch with your infantry, it will provide you from direct attack on your tank by grenade throwers and bottle throwers; she will also tell you the most dangerous targets and help you destroy them.

When attacking settlements and individual buildings, open gunfire from a distance of 600 — 800 "m to buildings located on the outskirts, since the enemy usually masks his tanks there.

When fighting against an enemy inside a settlement, lead the fire primarily on the detected enemy tanks. When shooting from stops, use watches, fences, hedges as masks.

In the village, act swiftly, combing the streets and alleys with machine-gun fire, and on the baking sheets ”, huddled in houses, fire from the 100 — 150 m distance, on wooden buildings - with a fragmentation projectile with a cap, on a stone - an armor-piercing grenade, on the open firing points and infantry - from a machine gun.

Tankman! Shoot down a mass of cannon and machine-gun fire on the enemy. Sweep away the fire, push the caterpillars manpower and equipment of the enemy!

When tanks are on the defensive, choose a firing position with good circular fire, so that there are no non-sweep spaces in front, not less than 400 m. The firing position should provide the ability to quickly launch a counterattack.

Carefully disguise the tank, and if you have time, do not spare the labor, bury it in the ground - this will protect your tank from defeat.

On the probable paths of movement of the enemy’s tanks, set obstacles from the groundfields and mines, accurately measure the distances to local landmarks in advance, write them down, and prepare baseline data for firing.

Carefully observe the battlefield. The crew of the tank, who had previously detected the enemy, has advantages in his destruction. Open the fire only at the command (signal) of the platoon commander and lead him with the highest rate of fire. Always be ready to go to the counter for the final destruction of the enemy.

Prepare new spare positions and covert access to them.

For an ambush, choose a line that would make it difficult for the enemy to maneuver with the main fire weapons.

Preparing a tank ambush should be as secretive as possible - carefully mask your tank.

All approaches suitable for the movement of the enemy must be known to all crews in ambush, reference points are studied and the distances to them are determined.

Let the enemy on 100 — 200 m, to beat him for sure. Open the fire only at the command (signal) of the ambush commander and know exactly your role in repelling the enemy when he appears from different directions and in various battle formations.

The suddenness of the first fire attack and decisiveness in the actions will ensure the success of the battle in ambush.

Lead a aimed fire at the tank with the maximum rate of fire closest to you. Transfer the fire to other targets only after you destroy the first target.

Lead the observation of the results of your fire and adjust the fire by removing the aiming point.

When changing firing positions in ambush tanks change them in turn, supporting each other with fire.

When leaving the battlefield under enemy fire, withdraw the tank in reverse until the first shelter; Only there, deploy your tank, otherwise when turning you will substitute the most vulnerable places under enemy fire.

The crew, in any case, do not leave your tank, lead the fight from it to the last projectile (patron, grenades). Know that our tanks or infantry will come to your aid.