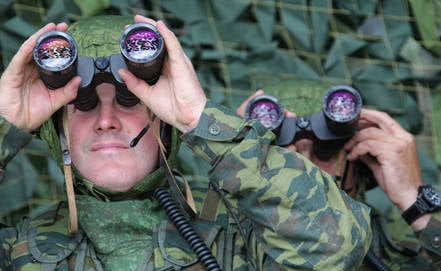 The events of the active phase of the exercise, which were rapidly unfolding at the Prudboy training ground in the Volgograd Region, were attended by more than 500 military personnel and about 50 units of military equipment. According to the scenario, the airborne unit of the Belarusian armed forces supported by the crews of Russian army helicopters aviation Mi-28N blocked the way for the militants to leave the settlement in which they held hostages. Meanwhile, the Ukrainian mechanized company on the Tiger armored vehicles supported by the motorized rifle company of the Russian Ground Forces with a dowry tank platoon carried out the seizure of the village.


The battle with the militants became one of the main episodes of the “Slavic Commonwealth”. Even the operation to free the hostages, according to the teachings legend, was carried out under the influence of enemy sabotage and reconnaissance groups, not to mention the fact that the soldiers had to repel militant attacks on a military convoy. This once again confirms the fact that more and more exercises are organized in conditions as close as possible to the combat ones. And the subject of these particular joint maneuvers was developed taking into account the experience of the conducted special operations for the destruction of illegal armed formations.

Moreover, as it was stated, in the course of working out joint actions, the military personnel of the three countries carried out the protection of important state facilities, escorted the convoys, landed on the banks of the Don River, and also carried out a number of reconnaissance and search activities. According to the commander of the 20-th Guards detachment of the Carpathian-Berlin Red Banner, the Order of Suvorov, the Sergey RVD motor-rifle brigade of the Southern Military District, the servicemen confidently coped with the combat mission. Following the results of the special operation, the militants were destroyed before 50, all hostages were released.

However, the exercises were not limited to working out joint conditional combat missions. Especially for the fighters of the “Slavic Commonwealth” at the Prudboy training ground were the soloists of the Ensemble. A.V. Alexandrova, who prepared a new song for the tour in the Volgograd region. The opportunity to visit the concert of the famous ensemble was also given to servicemen of units in the village of Marinovka and in the city of Volzhsky. In addition to spiritual food, the military in the literal sense did not lack the traditional food. In the canteen, the food of the fighters was organized with elements of the "buffet".

Judging by the press service of the Southern Military District, the reception of foreign participants of the “Slavic Commonwealth” was organized at the highest level. In addition to the above-mentioned innovations, five international call centers were equipped at the Prudboy site, from where servicemen could call their relatives and friends in their free time. In the new barracks of the Kubrikov system, where soldiers from Ukraine and Belarus lived, shower cabins were installed and satellite television was installed.

Despite the fact that the active phase of the exercise is over, the events within the framework of the “Slavic Commonwealth” will last until July 10. At the end of the program, the military personnel of the participating countries will visit the Memorial Complex "Panorama Museum of the Battle of Stalingrad." Representatives of the delegations will honor the memory of the fighters who died in the battles for our Motherland, and lay flowers in the Hall of Military Glory on Mamayev Kurgan. For the participants of the “Slavic Commonwealth” it is not just a ritual of giving military honors, but a reminder of the traditions of military fraternity, sealed with the blood of our peoples on the fronts of the Great Patriotic War.