Hybrid helicopters coming to the fore

July 10 2013
33
After understanding the details of the unsuccessful hostage rescue operation from the US Embassy in Tehran in 1980, when 3 out of 8 helicopters participating in the operation were unable to fulfill their mission and endangered the entire mission, military experts and analysts came to the conclusion that American the fleet desperately needed new cars. The military needed aircraft that would combine the vertical take-off of a helicopter with the speed and range of a jet aircraft. As a result, the famous V-22 “Osprey” tiltrotor with a variable tilt of rotors was born. V-22 is able to take on board up to 24 passengers and carry them to a distance of up to 1000 nautical miles at a speed of about 400 km / h. To date, it is the only tiltrotor in the world commercially available and in service with the US Army.


It is worth noting that today it is one of the most flexible vertical take-off and landing aircraft (VTOL) in the US Navy, which, in addition to the V-22, also include regular helicopters and so-called “jumping aircraft”. In addition, the V-22 "Osprey" is also the youngest of them. It is the convertiplane V-22 that represents the latest major addition to the VTOL arsenal in the last two decades.

And as modern tactics of warfare are increasingly inclined towards carrying out lightning, covert operations, VTOL has once again become a priority area for strategists of the American armed forces. In 2013, in the United States, 2-new programs were launched that are designed to improve flight speed, range, and efficiency of VTOL-machines. In March of this year, the US Army launched a project that officially begins accepting design technology developments that could become the basis of a new generation of rotary machines. The well-known companies Sikorsky and Boeing submitted a joint application, which is based on the Sikorsky X2 propeller and rotor system, which has already been repeatedly in the air; Bell Helicopter (one of the founders of the V-22) offered the military to improve the variable rotor system; and the European aerospace giant EADS is promoting its own design solution, which is based on an experimental super-helicopter called the “Eurocopter X3”. 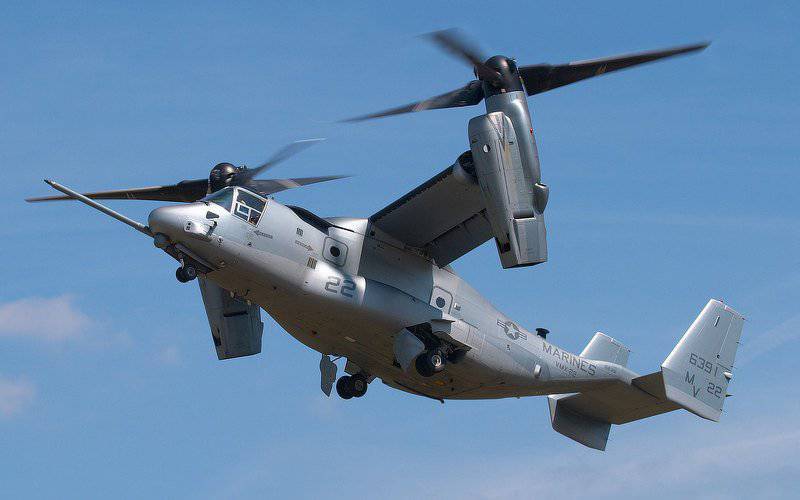 V-22 "Osprey"
Sikorsky X2 (Sikorsky X2) is an experimental helicopter designed and built by Sikorsky Aero Engineering Corporation. It is a flying prototype helicopter coaxially with a pusher propeller, the machine was built on the basis of the experimental model S-69.

This aircraft is based on the concept of the advanced blades (ABC), it is equipped with two four-blade rotors, rotating in opposite directions, as well as a six-blade tail propeller. All the screws of the machine are driven by one turboshaft engine - LHTEC T800. Control Sikorsky Х2 completely electronic, mechanical connection between the performing devices and controls is absent. The weight of the machine, according to the manufacturer, is 3,6 tons, the maximum flight speed should be 474 km / h, and the maximum range - 1300 km. On the basis of the experimental helicopter Sikorsky X2, the S-97 Raider project is being implemented.

EurocopterX3 (or X-Cube) is an experimental hybrid model of a helicopter or rotary wing, which is designed and built by the famous company Eurocopter. This model was created in order to enable the helicopter to fly at speeds in 410 km / h. The main rotor EurocopterX3 consists of 5 blades, and at the ends of its short fixed wings were installed additional pulling propellers, which also have 5 blades. The tail propeller is absent on this aircraft. 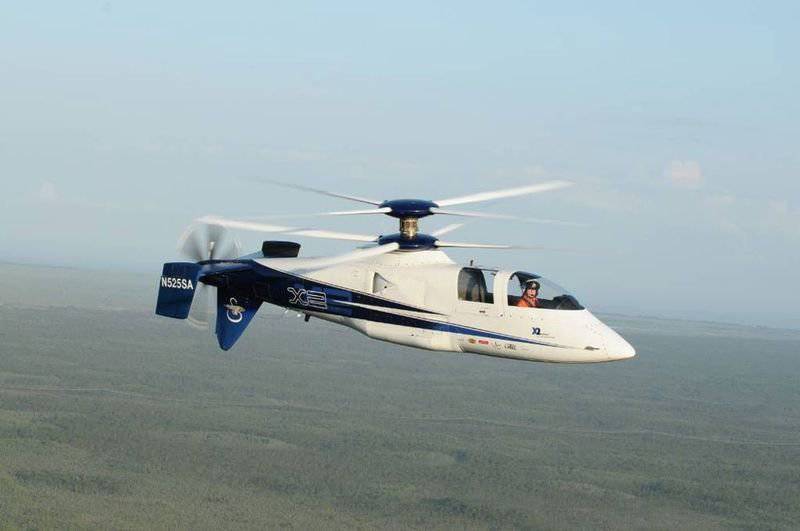 Sikorsky X2
It is by the presence of short wings EurocopterX3 can be distinguished from the base model of the European concern - Eurocopter EC155 - on the basis of which it was developed and embodied in the metal. It should be noted that the base model Eurocopter EC155 significantly lags behind its hybrid counterpart in flight speed. The maximum speed of a regular helicopter is 175 nodes (324 km / h).

Compensation of the resulting reactive moment, which appears when the rotor rotates, is due to the work of the side propellers. The power plant of this aircraft consists of Rolls-Royce Turbomeca RTM2 322 turboshaft engines.
His first flight of EurocopterX3 made 6 September 2010 of the year in France. 12 May 2011, the machine was able to reach speeds in 430 km / h. 7 June 2013, the Eurocopter X3 hybrid helicopter set an absolute world record and provided a real breakthrough in stories aviationhaving managed to accelerate to a speed of 255 knots (472 km / h). Thus, the world record for horizontal helicopter flight speed was broken.

During its operation, the Eurocopter X3 hybrid helicopter managed to fly more than 140 hours. The first time the car took to the air in 2010 year. This was followed by a break in flights of a whole year, apparently, this time was spent by European engineers on the modernization and radical alteration of some of the nodes of the helicopter. In the near future, the Eurocopter X3 will be able to become the prototype for the creation of a new high-speed helicopter, which has already received the designation LifeCraft. Work on this machine is carried out by order of the European Commission. It is still difficult to say how long the Eurocopter X3 hybrid helicopter will be able to hold the palm in speed horizontal flight. Since on the way a new high-speed helicopter S-97 Raider, designed on the basis of Sikrosky X2. Soon this car should make its first flight. 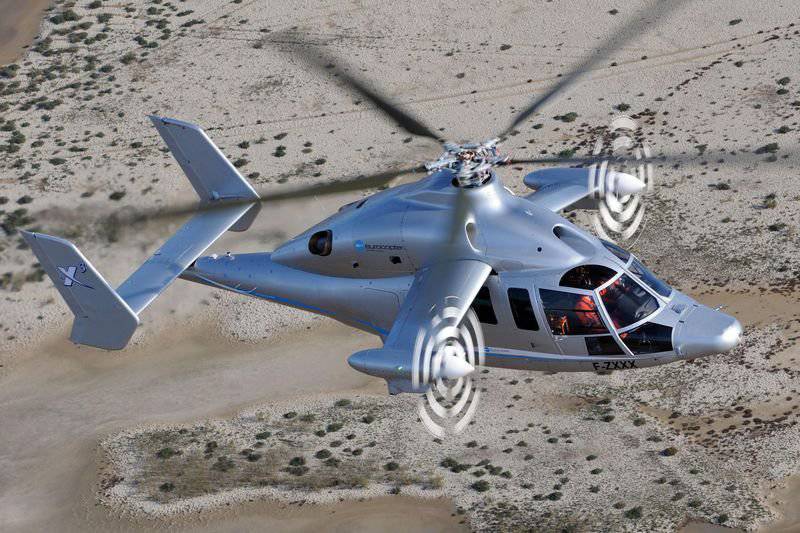 Eurocopter X3
In addition to the above developments, the Agency of Advanced Defense Projects DARPA in February 2013 announced the launch of a new program with a total value of 130 million dollars. This program offers aerospace engineers to create a completely new approach to the concept of vertical take-off and landing aircraft - a wing with a rotor, a fixed wing, or there may be some kind of hybrid between these proposals.

Possessing a maximum flight speed of more than 400 km / h, the new VTOL will be able to significantly increase the operational capabilities of the US military. The increase in the speed of flight of helicopters will significantly reduce the time of delivery of personnel and cargo, as well as combat units to where it is needed, regardless of the terrain landscape in a given area. Despite the fact that precise design projects will be kept secret for some period of time, both DARPA and the US Army are counting on the first demonstration samples to be able to take to the 2017 year. Most likely, all of them will draw ideas and ready-made solutions from already implemented projects, which were written above. After almost 24 years, which have passed without any significant innovations, the concept of VTOL is again becoming the focus of attention of the US military.