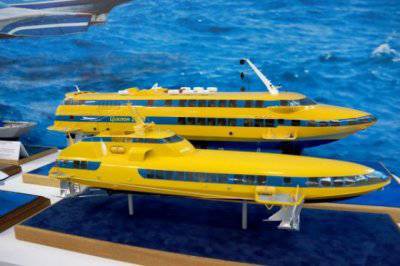 During the exhibition “International Naval Salon-2013”, held in St. Petersburg last week, Russian shipbuilders announced the upcoming revival of one almost forgotten direction. During July, the Vympel shipyard in Rybinsk will begin construction of a new hydrofoil vessel. The last time such equipment was built in our country about twenty years ago.


Nizhny Novgorod Central Design Bureau for hydrofoil them. R.E. Alekseeva (Central Design Bureau for SEC) several decades ago created several models of such equipment, which became widely known. However, recently the development and construction of hydrofoil vessels has ceased. The new ship, bookmarked for the coming days, will be built in accordance with the new project 23160 "Comet-120". This project, allegedly, combines the best practices of past years, as well as modern technologies and electronic equipment. According to the figurative expression of the General Director and Chief Designer of the TsKB for SEC S. Platonov, “Komet-120M” differs from the previous “Komet” in the same way as the Sapsan train differs from a simple train.

From the previous ships on hydrofoils, the new “Kometa-120M” is primarily characterized by its wide use of composite materials in the construction. In addition, management systems have undergone major improvements. As a result of all these measures, several tons were saved and the vessel was considerably lightened. The reduction in the weight of the entire vessel, in turn, made it possible to change the draft and design of the hydrofoils, which ultimately had a beneficial effect on driving performance. The stated maximum speed of “Comet 120M” is near 60 nodes, which exceeds the capabilities of all previous ships of this class.

23160 project vessels are proposed to be equipped with modern electronic navigation and communication equipment. At the IMDS-2013 cabin, the TsKB for SEC demonstrated not only the models of their hydrofoil vessels, but also the full-scale layout of the Komet-120М control systems. All the usual devices on the panel are replaced by several large monitors, and most of the controls have given way to push-button controls. At the same time, the functionality and information content of new systems fully complies, and in some indicators it exceeds the corresponding indicators of the systems used earlier. 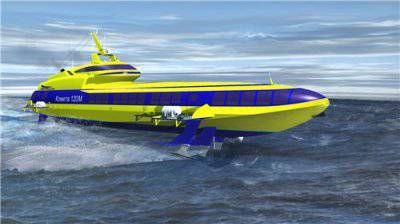 The declared economic qualities of the new ship Kometa-120М are likely to interest potential customers. The payback period is set at five years, and the total lifetime with timely maintenance should exceed 25 years. During this period, the ship will be able to carry up to 120 passengers during each flight. It is especially noted that two options “Comets-120М” are available for ordering, intended for operation on rivers and at sea. Most of the design of both options has no differences, but the ship for the sea will have a different anti-corrosion coating of structural elements and a hydrofoil of a different shape, adapted for work in sea conditions.

The construction of the first hydrofoil ship of the Kometa-120M project will start from day to day. In the future, CDB for hydrofoil vessels to them. R.E. Alekseeva plans to bring to production a few more such projects. So, at the last exhibition, the model of a ship on hydrofoils of the 23170 “Cyclone-250М” project, designed for the transportation of 250 passengers, was demonstrated. In addition, in the coming years, the serial construction of 23180 “Valdai-45Р” vessels, capable of carrying about four dozen passengers, can begin. However, these projects are still in the plans. First of all, the Central Design Bureau for SEC intends to launch the production of new “Komet-120M”. Only after these vessels go to work on passenger traffic will preparations for the construction of other types of SECs begin.

The impetus to the current work of the TsKB on hydrofoil vessels and the Vympel shipbuilding plant can be considered the Federal Target Program “Development of Civilian Maritime Transport”, within the framework of which promising research and development programs are financed. In the course of this program, only the Central Clinical Hospital for the SEC them. R.E. Alekseeva commissioned by the Ministry of Industry and Trade has several projects, the total cost of which exceeds 590 million rubles. According to the available information, the Central Design Bureau is required to prepare four hydrofoil projects and two aircraft vessels on an air cavity by 2014, as well as to conduct several research programs necessary for the implementation of other projects.

The high characteristics of new ships on hydrofoils, as well as the extensive experience of operating such equipment, suggest that Kometa-120M will be of interest to potential customers and will enter a certain amount in service with shipping companies. It is too early to speak about the specific prospects of the Central Design Bureau for the SEC, since the construction of the first ship of the new project has not even begun yet.