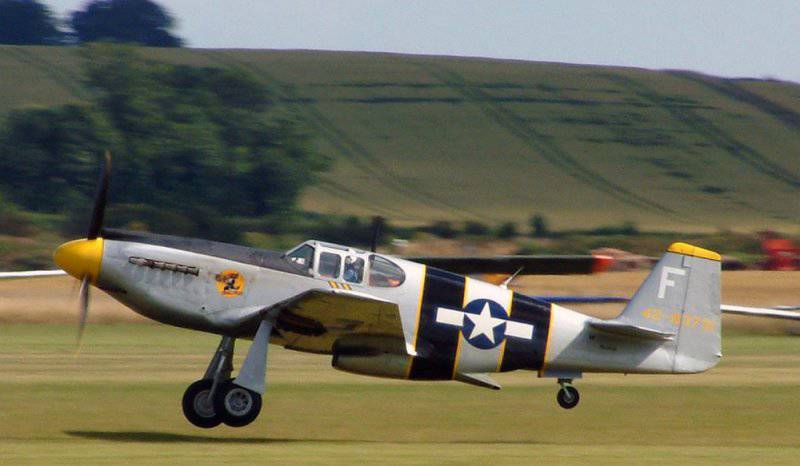 Aircraft Р-51 "Mustang" during the Second World War were used almost everywhere. On the territory of Europe and the Mediterranean, the plane was primarily known as an escort fighter because of its long range. In England, the Mustangs were used as interceptors for the V-1 missile aircraft. The end of the war did not affect the combat career of the fighter. Although during the Korean War the main force was already jet fighters, there were tasks that they could not solve. Airplanes equipped with reciprocating power units were still used to support the ground forces. In Korea, he also made his debut aircraft in the battle of the original twin-Mustang P-82. This long-range night fighter was created based on the P-51.

The military career of the Mustangs in the US Air Force ended only with the signing of a truce in 1953 year. But these planes were still used, at least until the end of the 60s, during local clashes and in combat operations against partisans.

The military career of the plane began in the autumn of 1941, when the first Mustang I fighters began to arrive at the experienced Royal Air Force center in Bosco Down. After the test flights, it turned out that at an altitude of 3965 meters the speed of the aircraft was 614 km / h, which was the best indicator for American fighters, which at that time were delivered to the UK. According to the pilots, it was a very easy to operate and highly maneuverable aircraft. However, the Allison V-1710-39 power unit installed on the Mustangs had a significant drawback - after climbing more than 4000 meters, it began to rapidly lose power.

This significantly reduced the number of tasks that the fighter could perform. At that time, the British needed machines that could fight German bombers at high and medium altitudes.

The entire batch of aircraft transferred to the tactical squadron aviationwho were subordinate to the command for interaction with the ground forces, and there a high altitude was not required.

The first part of the Royal Air Force, which entered the "Mustangs" - 26-I squadron, which was stationed in Getvik. The squadron received the first aircraft in early February 1942 of the year, and 5 in May 1942 new aircraft took part in the first combat sortie. It was a reconnaissance flight along the French coast.

On the aircraft "Mustang I" was installed camera, placed behind the pilot's seat. At the same time on the machines remained standard weapons to protect against enemy fighters.

Mustang airplanes, equipped with Allison power units, took part in operations Rubarb, Ranger and Populyar, where they operated in pairs or small groups at low altitudes. The Ranger operation included attacks on a low-level flight on railways and highways. Usually, the attacks were a free hunt in a given square without preliminary targets, which was carried out by 1-6 aircraft. In the operation “Rubarb” various military and industrial facilities acted as targets. In such raids participated from 6-12 aircraft, and the fighters received the order not to get involved in the battle.

The main opponent of the Mustangs is anti-aircraft artillery. In July, 1942 was lost ten aircraft, but only one was shot down in aerial combat.

Gradually, the Mustangs were assigned new tasks. The aircraft was accompanied by torpedo bombers and bombers, along with coastal defense squadrons. Due to the excellent flying qualities at low altitudes, the Mustangs could intercept German Fw 190 aircraft that made raids on coastal Britain. Usually, German pilots stayed at the very surface of the English Channel so as not to get on radar screens.

The first Mustang aircraft that arrived in parts of the United States were the reconnaissance aircraft F-6А (P-51-2-NA) with four 20-mm guns and cameras.

Aircraft "Mustang", equipped with the engine "Merlin" appeared on the territory of Europe in the autumn 1943 of the year. Then the 354 th fighter group, which was deployed in Florida, was transferred to England. Having received a new engine, the Mustang became a full-fledged high-altitude escort fighter and an air defense day fighter.

Based on the success of the low-altitude "Mustang I", it was decided to create a shock modification that could drop bombs from a dive.

The new aircraft was given the name A-36 "Apache". His first flight took place in October 1942. 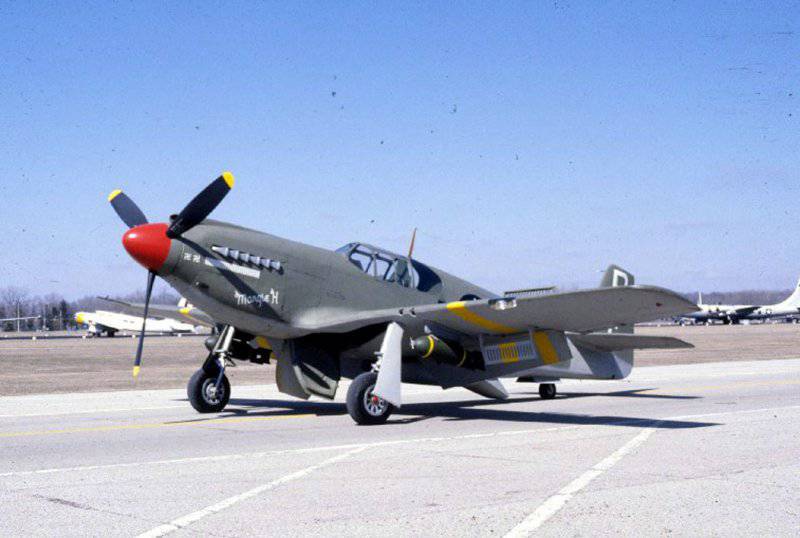 To reduce the dive speed, perforated aluminum plates appeared on the lower and upper wing surfaces, which reduced the speed to 627 km / h.

The aircraft received the Allison V-1710-87 engine, which had good performance at low altitudes. Its power reached 1325 HP. at a height of 914 meters, but after climbing more than 3650 meters, it began to decline. The A-36 also has a new radiator air intake, of the same shape as its predecessor, but without an adjustable sash.

Armament A-36 consisted of four Browning 12.7-mm machine guns installed in the wing, as well as two in the nose. Under the wings was also a pair of bomb racks, shifted to the landing gear to reduce the load. They could have a 500-pound bomb, smoke screening equipment, or a dumped fuel tank.

These aircraft entered service with the 27-th light bomber group and the 86-th group of diving bomber. The 27 group included three squadrons: 522, 523 and 524. In October 1942, the pilots received new A-36А to replace the old A-20. 6 June 1943, all groups were on alert, starting combat missions to the Italian islands of Lampedusa and Pantelleria. This was a prelude to the Husky operation, which included the landing of Allied forces on the territory of Sicily.

As part of the second - 86 group - was 525, 526 and 527 squadron. The pilots began combat missions in mid-June, launching attacks against targets in Sicily. Over the 35 days since the beginning of the battles, the pilots of the two groups scored more than 1000 sorties. In August, 1943, both groups received the name of fighter-bomber. 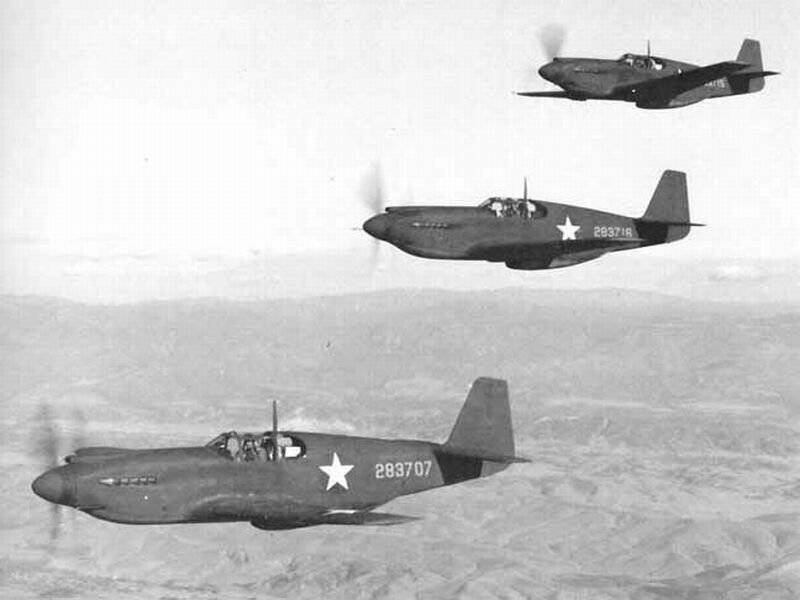 The main combat mission of A-36 was diving bombing. Usually the attack was carried out by links of four aircraft, which began a dive at a height from 600 to 1200 meters. The attack was carried out in turn. It is worth noting that similar tactics led to great losses, especially often they were shot down by small-caliber artillery. A-36-A had almost no reservations, and liquid-cooled engines were highly vulnerable.

Over the span of 1 to 18 on June 1943, the anti-aircraft gunners shot down twenty aircraft.

As a rule, they were shot down during an 2-3 attack. In addition, it turned out that the stability of the aircraft during a dive is disturbed by aerodynamic brakes. In the field, they could not be modernized. There was even an official ban on their use, but the pilots ignored it. Thus, there is a need for tactical change. Now the attack began at a height of 3000 meters with a lower dive angle, and the bombs fell from a height of 1200-1500 meters.

Still later, it was decided to drop all the bombs in one combat approach in order to reduce losses from anti-aircraft fire.

Also, A-36A aircraft were used as low-altitude high-speed reconnaissance aircraft. Although these aircraft did not arouse the interest of the British, they were staffed by a reconnaissance unit of the Royal Air Force, stationed in Tunisia and Malta. From June to October 1943, the British received six A-36A planes, which were facilitated by dismantling part of the weapons. Behind the cockpit was also installed a camera.

The informal name of the aircraft is “Invader” (Invader), which they received due to the nature of their combat missions. The name was not officially fixed, as it had previously been used for the A-26 attack aircraft, produced by Douglas.

Deprived of bomb weapons, the aircraft became a good fighter at low altitudes. Sometimes they were even used as escort fighters. For example, on August 22 and 23, a group of A-36А aircraft accompanied a group of twin-engined Mitchell B-25 bomber aircraft that were supposed to strike in the Salerno area at a distance of 650 from the airfield.

Although air battles were not the main task of these planes, their pilots often shot down enemy planes. The highest result was given to Lieutenant Michael J. Rousseau from the 27 group, who shot down five aircraft.

Two groups of aircraft A-36A significantly influenced the course of the fighting in Italy. The aircraft provided ongoing support during the 9 September 1943 landing, destroying the enemy’s fortifications and communications.

And the decisive factor for the victory was the destruction of one of the key transport hubs in Katanzara, which almost completely paralyzed the transfer of enemy units.

14 September 1943, the US 5 Army units in the Apennines are in a critical situation. The crisis was resolved only thanks to the vigorous actions of the A-36А and Р-38 aircraft, which launched a series of successful strikes against enemy concentration points, bridges and communications. Both groups have proven themselves during the entire Italian company.

A-36A also participated in the battles against the Japanese army. Departures into Burma became very effective when the Japanese infantry was burned in the jungle with napalm. There was a relatively small amount of aircraft here, so the Apaches were especially valued.

The completion of the A-36A’s career came in the second half of 1944, when they were officially removed from service. At this time, new aircraft began to arrive in the Allied forces: the following modifications of the Mustang, the P-47, and also the British Typhoon and Tempest. They had an increased bomb loading and range.

Total attack aircraft conducted 23373 sorties, during which 8000 tons of bomb was dropped on the territory of the Far Eastern and Mediterranean Front. During the air battles, the enemy's 84 aircraft were destroyed. Themselves A-36 was lost 177.

These are pretty good results for a fighter-bomber.

Ctrl Enter
Noticed oshЫbku Highlight text and press. Ctrl + Enter
We are
"Starfire" of the Korean War. Interceptor F-94 "Lockheed"An-12 in Afghanistan
15 comments
Information
Dear reader, to leave comments on the publication, you must to register.