The death of the battleship "Bismarck"

January 18 2011
3
Operation Rhine exercises included the Bismarck battleship and the Prince Eugen heavy cruiser entering the Atlantic Ocean through the Danish Strait. The main objective of the operation was to access British shipping fleet. It was assumed that the Bismarck would engage escort convoys in battle, while the Prince Eugen would sink merchant ships. The commander of the operation was appointed Admiral Gunter Lutiens, who asked the command to postpone the start of the campaign so that he could join the Tirpitz test or the "pocket battleship" Scharnhorst being repaired in the port of Brest. However, Admiral Erich Raeder, Commander-in-Chief of the Kriegsmarine, did not support Lutens, and on May 18, 1941, “Prince Eugen” and “Bismarck” went to sea.

On May 20, German ships were spotted from the neutral Swedish cruiser Gotland, on the same day representatives of the Norwegian resistance reported on a squadron of two large warships. On May 21, the United Kingdom received a message from its military attache at the Swedish embassy about the discovery of two large German vessels in the Kattegat strait. From 21 to 22 in May, the ships stopped in the fjords, not far from Bergen, Norway, where they were repainted, and the Prince Eugen was refueled. For unknown reasons, the Bismarck did not refuel. While the ships were parked, they were able to photograph the reconnaissance aircraft of the Air Force of England. Now the English admirals have precisely identified Bismarck.

The commander of the British Home Fleet, Admiral John Tovey, almost immediately sent the battleship Prince of Wales and the battle cruiser Hood, accompanied by the destroyers, to the south-west coast of Iceland. The Suffolk cruiser was supposed to join the Norfolk cruiser in the Danish Strait. The light cruisers Birmingham, Manchester and Arethusa were to patrol in the strait between the Faroe Islands and Iceland. On the night of May 22, Admiral Tovey himself led a flotilla of the battleship King George V and the aircraft carrier Victories with an escort from the Scapa Flow fleet. This flotilla was to await the German ships to the northwest of Scotland, where it was to meet the battle cruiser Ripals. 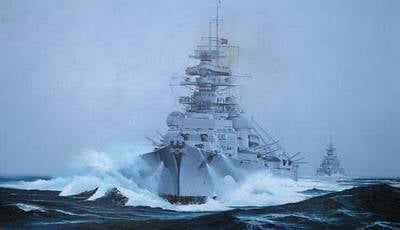 The battleship Bismarck and the heavy cruiser Prince Eugen

On the evening of May 23 in the Danish Strait, in conditions of thick fog, the cruisers Suffolk and Norfolk came into visual contact with German ships. The Bismarck was forced to open fire on the Norfolk, after which the British ships retreated into the fog and transferred to their command the location of the enemy, continuing to follow the Bismarck on the radar at a distance of 10-14 miles.

Fight in the Danish Strait

The flagship of the English fleet "Hood" and the battleship "Prince of Wales" established visual contact with the German ships in the early morning hours of May 24 and in 5: The morning began 52 battles, being at a distance more than 20 km. Vice-Admiral Holland, who commanded the compound, ordered that the first ship be fired upon, taking him for the Bismarck. On the "Prince of Wales" quickly figured out the error and transferred the fire to the second ship. Soon Holland himself realized this, but apparently his order never reached the center of fire control, since the Hood continued to fire at the very end of the Prince Eugen.

In 5: 56, the sixth salvo from the Prince of Wales hit Bismarck, shells damaged fuel tanks and caused fuel to leak and fill them with water, the ship began to leave the oil shelf. A minute later, the Hood received hits from the third Bismarck volley and the second Prince Eugen volley on the ship began fires. At this time, the Bismarck received two more hits from the Prince of Wales below the waterline. By 6: 00 hours the ships got closer to 16 km. At this time the Hood covered the fifth salvo from the German battleship, the explosion and pride of the English fleet broke in terrible force and broke in half in a matter of minutes. Of the entire crew of 1417, only three were saved.

The battleship "Prince of Wales" was forced to continue the fight alone and he developed for him extremely unsuccessfully. The ship was forced to move closer to the German ships to the distance in 14 km., Avoiding a collision with the remnants of the Hud. After receiving seven hits, which knocked out one of the towers of the main caliber, the battleship left the battlefield, covering itself with a smoke screen.

The captain of the Bismarck Lindemann offered to continue the pursuit and sink the battered battleship, but Admiral Lyutyens ordered to continue the march. On Bismarck, as a result of the battle, one generator failed, outboard water began to flow into boiler room No. XXUMX with two boilers, two fuel tanks were pierced, the ship was trimmed to the bow and roll to starboard. Admiral Lyutyens decided to break into the French port of Saint-Nazaire for repair, after which the battleship would be able to freely access the communications of the Atlantic. 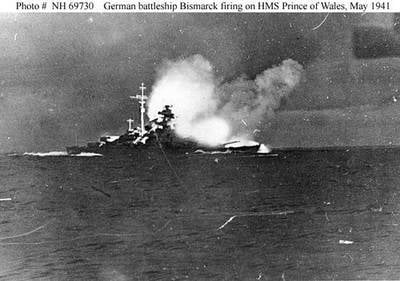 The Suffolk and Norfolk cruisers and the damaged Prince of Wales battleship continued their pursuit of the Germans, passing on their location. The death of the flagship of the fleet of the battle cruiser “Hood” made a very painful impression on the English admirals; later, a special commission was created to investigate the circumstances of the death of “Hud”. Now most of the military vessels in the North Atlantic connected to the hunt for the Bismarck. For the pursuit of the battleship were involved in the escort ships of many military convoys. So for this operation was involved the battleship "Rodney" and three of the four destroyers who escorted the former passenger ship Britannick turned into military transport. Additionally, 2 battleship and 2 cruisers were attracted for the operation. The fleet “H” deployed in Gibraltar was put on alert, in case the Bismarck moves in their direction.

About 18 hours 24 May "Bismarck" suddenly turned in a fog and went to his pursuers. After a short battle, the ships did not make contact with each other, but the British ships were forced to flee, during which time Prince Eugen successfully broke off contact with them and reached the French port of Brest in 10 days. At half past nine, Liutens reported to the command that the Bismarck, experiencing a shortage of fuel, ceased attempts to shake off its pursuers and was moving directly to Saint-Nazar.

The same evening, Admiral Tovey ordered the Victories aircraft carrier to get close to the battleship, and already in 22: 10 9 took off from it with the Svordfish torpedo bombers, who attacked the battleship under heavy anti-aircraft artillery fire and achieved one hit from the starboard. In this case, the ship did not receive serious damage, as the torpedo hit the main armor belt. In this incident, the crew lost one sailor (the first loss since the start of the cruise). At night, the Bismarck managed to break away from its pursuers, taking advantage of the fact that, fearing attacks from submarines, they began to carry out anti-submarine maneuvers.

The ship was again discovered only at 10:10 on May 26, when the US-British crew of the Katolina flying boat, flying from the Loch Erne base in Northern Ireland, was able to find the battleship. By this time, Lutiens still had 690 miles to Brest, and soon he could call a bomber to protect the ship Aviation Luftwaffe.

At that moment, the only English unit that could have slowed down Bismarck was the H-link, commanded by Admiral Sommerville, it intercepted from Gibraltar with the aircraft carrier Ark Royal. In 14: 50, the Sordfish torpedo bombers flew from its deck to the location of the battleship detection, by this time the Sheffield cruiser that had separated from the main forces, was trying to establish contact with the Bismarck. The pilots who did not know about it took him for a German and carried out a torpedo attack, fortunately none of the 11 torpedoes fired could hit the target.

In 17: 40 Sheffield discovered Bismarck and began his pursuit, repeated 15 raid of torpedo bombers on 20: 47 bore fruit, English pilots made two or three battles to the battleship, one of which was decisive, the torpedo hit the stern part of the vessel and damaged steering mechanisms. "Bismarck" lost the ability to maneuver and began to describe the circulation, the team's attempts to restore the ship's controllability were unsuccessful. 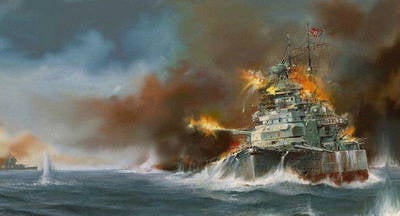 The last battle of the battleship

27 May at 8: 47 am from a distance of 22 km. The Bismarck was attacked by ships from the compound of Admiral Tovey, the battleships of King George V and Rodney and then the cruisers Dorsetshir and Norfolk began shelling the ship. The battleship snapped back. However, the British quickly achieved hits in the Bismarck for half an hour, he received damage to the main-caliber gun turrets, many superstructures, including fire control posts, were destroyed and burned, the ship received a strong list. In 9: 31, the last fourth gun turret of the cruiser was silenced, after which, according to the stories of surviving crew members, ship captain Ernst Lindeman ordered the ship to be flooded. Bismarck didn’t lower the battle flag to the end, which allowed Rodney to go 2-4 km. and point-blank to shoot the defenseless ship. However, the fuel on the British ships was coming to an end, realizing that the Bismarck would not get to Brest anymore, Admiral Tovey decided to return to the base. The cruiser "Dorsetshire" in the period from 10: 20 to 10: 36 launches torpedoes on the German battleship 3, each of which hits the target. In 10: 39, Bismarck fell on board and sank, only a little more than 110 crew members managed to escape, more than 2100 people shared the fate of the deceased ship.

Ctrl Enter
Noticed oshЫbku Highlight text and press. Ctrl + Enter
We are
Myths of the Great Patriotic. Papier mache helmetBismarck Hunt (May 1941)
3 comments
Information
Dear reader, to leave comments on the publication, you must to register.