July 11 2013
7
For all time of existence of the manual fire weapons A huge number of various options for the destruction of their own kind and not only were developed. Many of the ideas of designers have been successful and are used even to this day. Many, despite their obvious advantages over other solutions, are less popular and were used, for one reason or another, only in experimental models, or in weapons released in very limited quantities. It would seem that development and new ideas should only be welcomed, but in fact, if the designer did not have a sponsor or own funds, and his development was at least a bit more expensive compared to the already produced samples, then to serial production of such weapons the way was closed. The most that could be expected was that these weapons would be disassembled by the other designers for the other models, and that’s how in 90% the handgun developed. The designers applied their ideas even where, it would seem, to invent something new is already very difficult. So at the beginning of the twentieth century, German designer Decker developed his own version of a revolver for self-defense. This is not to say that his invention was revolutionary, but some of the solutions used in weapons were interesting, and most importantly reasonable. It is with this revolver that we will try to get acquainted in this article. 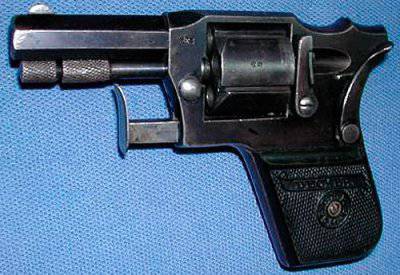 By itself, the gun proposed by Dekker is a self-defense weapon from a number of “pocket revolvers” fashionable at that time. As a result, the weapon turned out quite light and compact, using 6,25x15,5 cartridges. Naturally, such a model could not be a full-fledged means of self-defense, since even at ultra-short distances the effectiveness of such weapons depended on the point of impact. Despite this, compact models of short-barreled weapons were very popular at that time, including this revolver, although it was not produced in large numbers, but there were reasons for this that did not concern the design, reliability or some negative qualities of the weapon.

First of all, it is worth noting that the revolver has an unusual appearance. Immediately the trigger catches the eye, or rather the trigger pull of the revolver, which is not covered by the safety clip. Despite this, the safety of handling weapons is at a sufficiently high level, since shooting from a revolver is possible only with a self-platoon command, which means a great effort of pressing the “trigger”. 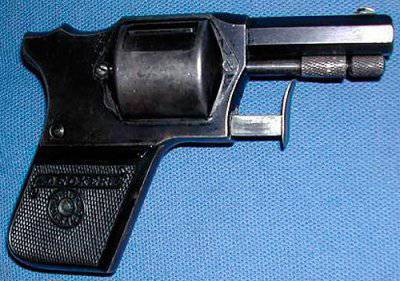 In addition, on the left side of the revolver there is a mechanical fuse switch that blocks the trigger pull of the weapon, and therefore other mechanisms of the weapon. Also on the left side there is a window for charging new cartridges and extracting spent cartridges. On the right side there are no weapon controls, but it is of interest that the drum of the revolver is covered with a casing, the purpose of which for me personally remains a mystery. Is that the protection of the index finger from a rotating drum. Also on the right side is pushed the pin, which fixes the axis of the drum. There are no devices that accelerate or facilitate reloading of the revolver. However, if we compare in time the speed of extraction of each cartridge and the insertion of a new cartridge in its place, with the rate of replacement of a previously prepared drum, then it will be faster to replace the drum. True, the cartridges in the drum are not fixed by anything, so this method of reloading is controversial. On the drum itself there are longitudinal grooves, the purpose of which is to securely fix the drum during the shot. Consequently, the design of the weapon is such that it is not possible to turn the drum freely, but it is impossible to fill in the drum of the revolver, which is not fully fired, and to fill it up, without removing it from the weapon. Sights are the simplest front sight and longitudinal kerf on the frame of a revolver, which plays the role of the pillar. The barrel of the revolver has a hexagonal section and is simply screwed into the frame of the weapon. 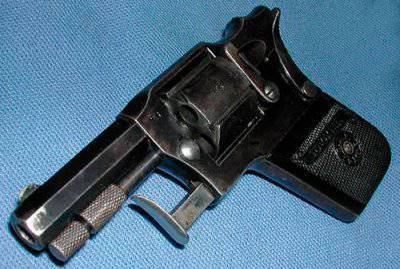 It is also impossible not to notice that the trigger is not visible in the revolver, which allows you to carry a weapon in your pocket without worrying about the fact that when you pull out the trigger, you can hook onto the clothes. I will say even more, the revolver does not have a trigger at all, its trigger mechanism is uncursed. While pressing the trigger pull, the drum of the weapon rotates and the twisted combat spring is simultaneously compressed, at some point the firing pin breaks down and the cartridge cartridge is hit in the fixed drum. This is not to say that such a trigger mechanism was cheaper or simpler in comparison with classical revolvers, which also had a rather primitive trigger, however, the designer’s idea is quite original and executed on “five plus”, provided that such simplicity It showed itself in total with a securely fixed drum and as a result there were practically no misfires. 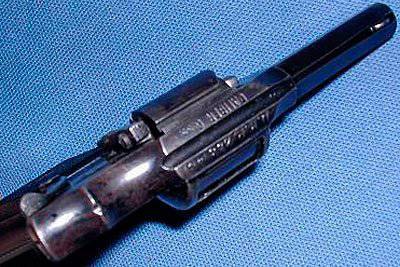 And now attention. The weight of the revolver without cartridges was 225 grams, which can be considered a kind of record. The length of the weapon barrel is 50 millimeters, the total length of the weapon is 118 millimeters, and the drum capacity is 6 cartridges. With all this, the weapon was completely made of steel and no cases of destruction in the process of shooting were recorded. If you give a description of the design of the revolver as a whole, then it was quite possible to make a full-fledged weapon with normal ammunition and dimensions, but this did not happen. The reason is probably not even the increased popularity of pistols, but the beginning of the First World War in which there was no place for civilian weapons with more than modest characteristics and efficiency. It is for this reason that a very small number of revolvers were released.

Of course, such a weapon cannot be considered a good example of a means of self-defense, despite the high reliability and simplicity of the design, primarily because of the ammunition. For entertaining shooting, this revolver is also not suitable because of its size. So on the whole, Dekker's revolver is an interesting but unfortunately useless weapon. 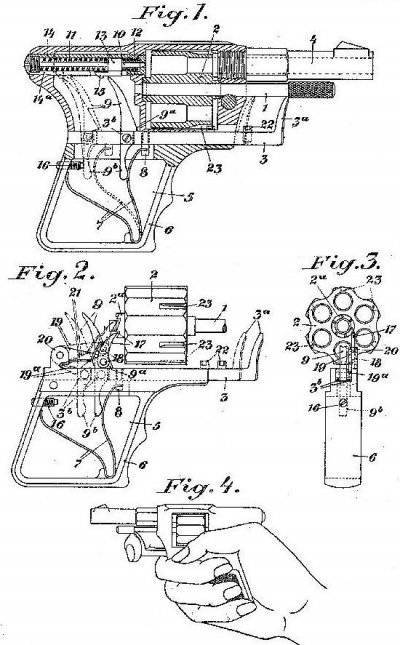