Very often you can find the phrase that this or that cartridge is made on the basis of another ammunition. Usually this relationship is perceived too clearly, although patrons do not have so much in common. It is clear that when they say that one cartridge is made on the basis of another, they most often mean that the experience of previous developments was taken into account in the design, but what ammunition really has in common, for example, the size of the sleeve, is not at all a prerequisite. But there are exceptions, which can really be said to be actually made on the basis of other cartridges. One example of such an exception is the .357SIG cartridge, which is based on a .40S & W cartridge case re-crimped for a XNUMXmm bullet, well, almost a XNUMXmm bullet. It is about this ammunition that I will try to tell in this article. 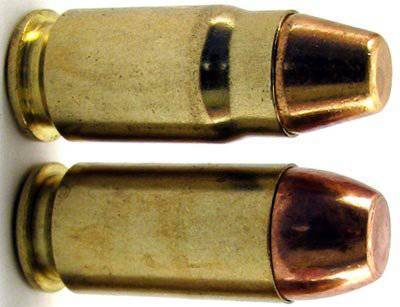 This cartridge appeared not so long ago in 1994 thanks to the work of the designers of the SIG-Sauer company with the participation of specialists from the Federal Cartridge company. The main goal was to create an ammunition that would be superior in its characteristics to the popular .40S & W, but at the same time had a reasonable recoil when firing, and was also relatively cheap. In other words, the main idea was to undermine the popularity of the .40S & W, and the designers succeeded. We managed to do this with a minimum of body movements and with a maximum result. It was possible to obtain higher characteristics by simply reducing the caliber of the cartridge when re-pressing the sleeve for a new bullet. Immediately, the first positive point was that the new ammunition became possible to use in pistols, which were originally designed for .40S & W cartridges, simply replacing the barrel, magazine, bolt in them, all this remained in place and did not require replacement. Many manufacturers were quick to add another barrel to their .40 pistols, which really boosted sales. weapons, though not for long. With the active use of .357SIG cartridges in weapons designed for .40S & W ammunition, pistol wear increased significantly, and therefore we can say that a simple barrel change is not a normal adaptation of a weapon to a new ammunition. Despite this, many manufacturers still supplement their pistol kits with only one barrel, although no less number of manufacturers simply created parallel weapon models already fully designed for the new ammunition. Thus, some interchangeability between .40S & W and .357SIG remains, but it cannot be called complete.

In addition, it is worth noting that, thanks to a new form of ammunition, the supply of ammunition during reloading has improved, which in general has increased the reliability of many samples. Due to the fact that the powder charge remained the same, and the mass of the bullet was significantly reduced, the initial speed of the bullet increased, and its trajectory of movement became more flat. Reducing the caliber also led to the fact that the bullet began to have better penetrating power, which allowed the ammunition to maintain its trajectory during the passage of light obstacles, as well as to hit the enemy in the means of individual armor of a low class. 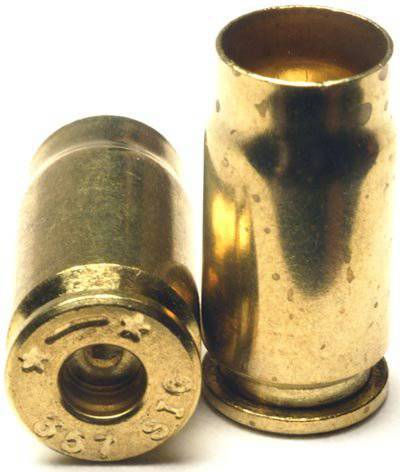 It should also be noted that when firing, this cartridge creates quite a comfortable recoil comparable to .40S & W, however, the kinetic energy of the bullet is comparable to that of the .357 Magnum cartridge. .357SIG cartridges can be loaded with various bullet options, which actually determines the bullet speed. So, a standard cartridge with a bullet weighing 6,12 grams is accelerated in a 100 mm barrel to a speed of 460 meters per second, the "fastest" ammunition is characterized by a bullet speed of 520 meters per second. The kinetic energy of bullets can reach 820 Joules, while the .40 S&W has a maximum of 790 Joules at a speed of 360 meters per second.

Thanks to a well-thought-out advertising campaign, this patron quickly gained popularity, and even government customers could not resist the pressure of advertisers. If you evaluate soberly this ammunition, then it is really good, but it is not good for everyone. So, for the civilian market as a cartridge for self-defense, I still like the .40S & W with an expansive bullet. The ability to hit the enemy in a bulletproof vest, and a low class of protection, is best left to law enforcement officers and the army. Whatever one may say, a heavy slow bullet .40S & W allows you to stop the enemy for sure, regardless of the place of impact. Higher speed for self-defense purposes is also not needed, since short ranges of weapon use simply do not give a clear advantage. But for recreational and sports shooting, this ammunition already has a really tangible advantage over the .40S & W. In general, the .357SIG cannot be called a full replacement for the .40S & W. 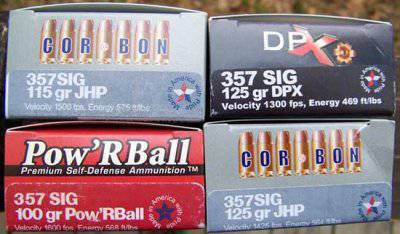 The problem with the adaptation of weapons for the new ammunition was partially solved by the craftsmen, who simply replace the return spring of the pistols with a more rigid one. This reduces wear on the parts of the pistols when using the .357SIG, but their life is still less than that of those models that were originally designed for this ammunition. In addition, due to the high pressure in the barrel when fired, the resource of the barrels for this ammunition is not the highest. This problem could be partially solved by barrels with a polygonal rifling, but for some reason they are used with this ammunition very rarely.

Summing up, one cannot but say that the .357SIG cartridge turned out to be very good, but it cannot be a replacement for .40S & W as the manufacturer wants to convince. In some ways, this ammunition is certainly better, but in some moments it is still inferior to .40S & W. The super armor-piercing cartridge for the pistol did not work out of it either, so, after all, this cartridge complements, and does not replace, the already widespread ammunition.