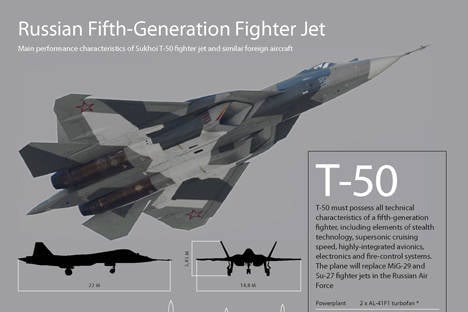 The new Russian fighter of the fifth generation PAK FA, also known as the T-50, is on a par with the American competitor F-22, in some areas even surpasses it, reports Russia Beyond The Headlines on July 7.


According to Mikhail Pogosyan, Director General of the United Aircraft Corporation (UAC), five cars are currently involved in testing, which allowed Russian designers to speed up the process of adopting the aircraft and reduce the gap with the United States.

For a long time, the F-22 is in service with the US Air Force and is considered one of the most advanced fighters in the world. Much less is known about his Russian rival T-50.

In terms of constructive solutions, the T-50 is the embodiment of the newest technologies of the Russian aircraft industry. This machine implements advanced technologies in the field of stealth, structural materials, artificial intelligence and electronic components, which brought the Russian military aviation industry to a new technological level.

New composite materials based on carbon polymers occupy 70% of the airframe area, due to which the empty mass of the aircraft is reduced by 20-25% compared to fighters made of traditional materials. Composites weigh by 50% less than titanium and aluminum alloys with comparable strength and stiffness. This factor allows designers to increase the mass of the combat load. The Sukhoi Design Bureau also emphasizes the "unprecedented low visibility of the PAK FA in the radar, optical and infrared spectra." T-50 has an effective reflective surface (EOC) within 5,3 sq. ft (its predecessor Su-30MKI has an image intensifier equal to 215 sq. ft.). This means that T-50 is less noticeable in 40 than Su-30MKI (Indian media reported that E-T-50 is 0,5 sq. Vs. 20 sq. M for Su-30MKI - note “VP”) It also has an impressive super-maneuverability, which is the hallmark of the fourth generation of Sukhoi fighters.

In addition, the T-50 also meets another requirement for modern fighters - a high level of board intellectualization. A radar with an active phased array (AFAR) is able to "see" everything that happens hundreds of miles away from an airplane. The radar can track several air and surface targets at the same time, keeping them on the crosshair of the sight. Several dozens of sensors are placed in different parts of the airframe, allowing not only to effectively use weaponbut also share information in real time. The "electronic pilot" function constantly analyzes information, providing the pilot with several options for action, which gives the pilot an opportunity to focus on the performance of the combat mission. Most of the data the pilot receives in the form of symbols and characters.

The T-50 can take off and land on runways the entire length of 1100 feet (according to Russian media reports, this figure is 300-400 m - approx. "VP"). In accordance with the canons of the stealth fighter has internal compartments for weapons. According to some data, these compartments can accommodate air-to-air class X-NUMX R-8 XR or two guided bombs of 77 pounds caliber (probably KNB-3300 caliber 1500-kg) . In addition, on external hangers, the aircraft can carry two ultra-long-range air combat missiles to hit targets at a distance of up to 1500 km.

The fact that India has joined the PAK FA program suggests that this fighter is promising and meets the highest requirements. New Delhi has allocated almost 25 billion dollars to this program and expects to receive its own version of the fifth-generation fighter by 2018.

It is the Indian-Russian version that will be offered for export, while the T-50 will go exclusively to the military Aviation Russia, for example, that the American F-22 is intended only for the US Air Force. Russian pilots are awaiting the entry into service of new fighters in 2013, it is planned to purchase at least 70 aircraft.

Ctrl Enter
Noticed oshЫbku Highlight text and press. Ctrl + Enter
We are
Lessons MAX-2015Be wary of the super-weapons of the Russian Air Force: Invisible Fighter T-50
15 comments
Information
Dear reader, to leave comments on the publication, you must to register.