The concept of a "folding" landing boat for the US Navy

July 10 2013
14
The July issue of 2013, the year of Proceedings, the main US naval magazine, published an article by Susan Altenburger, head of engineering company Phil Bolger and Friends Inc. of Gloucester, Massachusetts, by retired commander, "A Landing Craft For the 21st Century" by Susan Altenburger The US Navy Michael Bosworth (Deputy Director of Project Management Naval Sea Systems Command) and the US Navy Captain Michael Jung (Professor at Naval War College, and previously Commander of the Landing Transport Dock LSD 41 at Whidbey Island). The authors describe a proposal for the US Navy of a promising landing craft of a fundamentally new architecture, designated as Landing Craft Utility-Folding (LCU-F), and designed, according to the authors of the project, to replace in the US Navy as tank-landing LCU-1610 type boats, and partly - landing LCAC type air cushion boats (and proposed by them as a replacement for the KVP of the SSC project). The concept of the LCU-F boat was invented and started by the development of the recently deceased founder of the company Phil Bolger and Friends Inc. Phil Bulger, and is currently being developed by this company with the support of Naval Sea Systems Command and several other US Navy structures. Nevertheless, it is not clear whether the matter will reach the practical implementation of this project. 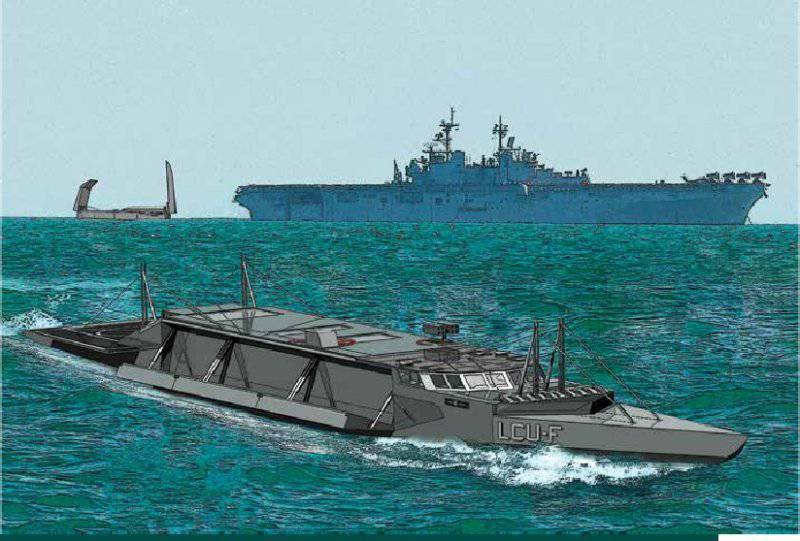 The design of the LCU-F boat is based on a fundamentally new architectural concept for the "folding landing craft". The boat is similar to the “Swiss folding knife”, with folding aft and bow ends with sharp contours, removed during storage on board or in the dock chamber of the carrier ship, providing relative compactness. When launching, the ends of the boats “unfold”, transforming it into a high-speed vessel with a large elongation, low draft and significant payload, while the folding feed is also a long ramp, providing a convenient landing. The nasal tip has "water-cutting" contours, providing good seaworthiness in waves. When folded, the LCU-F has a length of 143 feet, a width of 22 feet and a height of 20,5 feet, which allows it to be placed not only on landing ships, but also on the decks of transport vessels and supply vessels. When unfolded, the boat has a length of 270 feet, a width of 22 feet, a draft on the bottom of 4,5 feet and is capable of carrying up to 420 tons of payload with a full displacement of up to 200 tons (up to tanks M1A1) with a speed of up to 19-20 knots. The boat has two 1200 hp diesel engines. Movers with propellers having a recess of up to 11 feet are used for throwing to shore. When approaching directly to the shore, the propellers are retracted into the hull, and the boat is set in motion by two helical columns, capable of providing up to 4,5 knots with a draft of 10 feet, and thanks to the ability of the columns to rotate 360 ​​degrees, giving exceptional maneuverability. For unloading equipment, the boat is deployed and approaches the shore with a feed ramp. Speakers are also used to remove the boat from the shore. The cruising range at a speed of 19 knots with a full load should exceed 1500 miles, while the boat will be able to carry out operations on landing from landing ships located at a distance of 100 to 200 miles from the coast, and will also be able to stay in the open sea at night, avoiding termination landing operations.

The same steering wheels provide the boat with good maneuverability when approaching the landing craft for reloading. In this case, the loading of vehicles and 20-foot containers can be carried out afloat by cargo booms through the sliding roofs of the landing compartment of the boat. Another feature of the LCU-F boat is the presence of folding on-board sponsons on it, controlled by a special gyrostabilization system. The folding sponsons should increase the stability of the boat at low speeds (when departing from the landing craft and approaching the coast).

The armament of the LCU-F boat should include an Avenger eight-charge firing module (using Stinger missiles) and a Vulcan automatic X-gun caliber 20-30 mm. At the rear of the hull, there is a landing pad capable of adopting a helicopter class AH-1 / UH-1, which will allow the use of boats as intermediate bases for refueling these helicopters during the landing operation. In the tanker version, the boat must carry 55 thousand gallons of light fuel. The presence of weapons, capacity and high speed and seaworthiness will allow the use of boats as light combat, guard, anti-sabotage, the provision of special operations forces, for anti-piracy actions, etc. Also, boats can provide fire support for the landing by placing on them combat vehicles MLRS HIMARS or MLRS, capable of firing directly from boats.

According to the authors of the article, the innovative project LCU-F will provide a combination of high speed, maneuverability, heavy payload, fuel efficiency and low draft - a combination of properties that the LCAC type boats (and the proposed ones for replacement of CWP SSC) and LCU-1610 are currently lacking. The best choice of the authors consider the combination of LCS type LCAC and boats type LCU-F. In particular, the amphibious combat group (Amphibious Ready Group - ARG) consisting of one universal landing craft LHD and two amphibious transport docks LPD / LSD is capable of carrying three boats of type LCAC (Lna HD) and no less than 12 of boats of type LCU-F (on LPD / LSD), thereby ensuring a speedy throw to the coast in one wave of at least 15 landing craft. 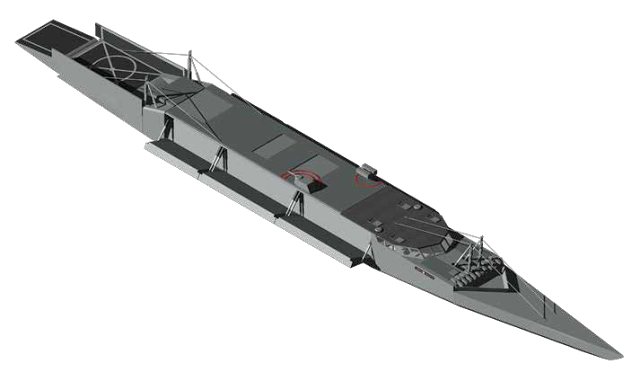 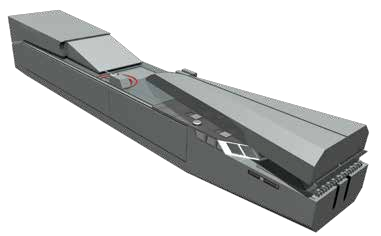 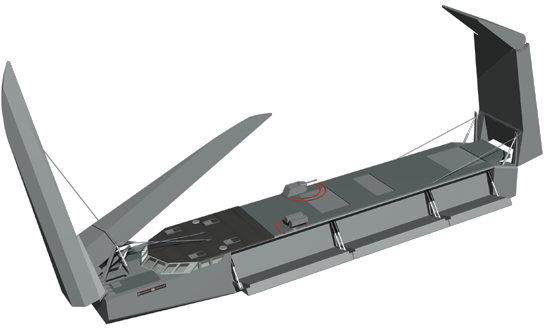 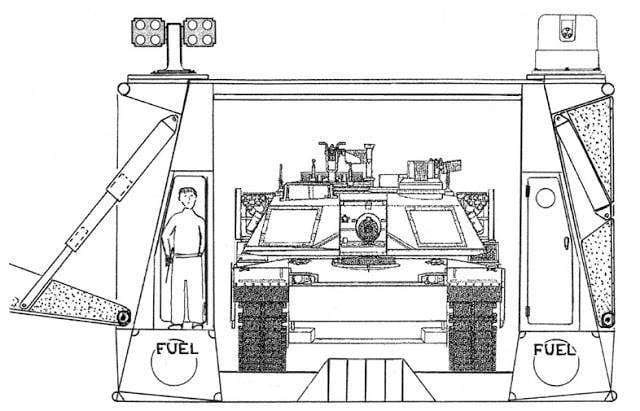