IMDS-2013: Russia is reborn as a full-fledged maritime power 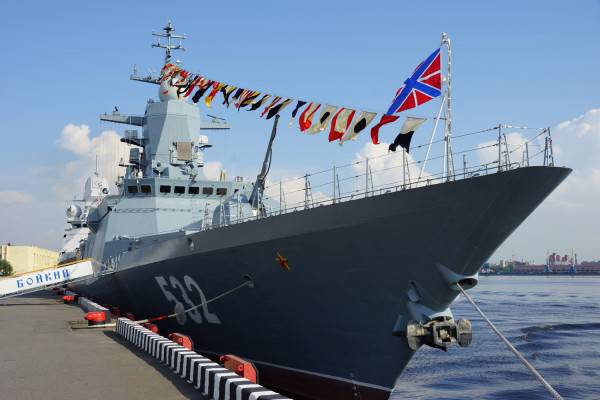 At the VI International Navy Salon, which completed its work in St. Petersburg, although no contracts were concluded, its exposition clearly showed that the shipbuilding industry was recovering from the crisis and gaining momentum.


According to the vice-president of USC, Igor Ponomarev, a confirmation of the fact that Russia is returning world positions in shipbuilding, was the arrival at IMDS-2013 of a record number of foreign shipbuilding officials and mid-level technical specialists. It is known that it is the middle link that determines the vector of making higher political decisions. And we had something to show to foreign practitioners. The presence of numerous representatives of the naval forces of various countries was also striking.

Igor Ponomarev stressed that IMDS-2013 is among the top three exhibitions, both in terms of exhibitors and expositions. The authority of the Petersburg salon is growing every year.

During the work of IMDS-2013, a lot of interesting News and for the first time showing the latest developments. In Russia, after almost twenty-five years of inactivity, construction of high-speed hydrofoil vessels is resumed. Our country is the only one in the world where they own the secrets of designing and manufacturing such ships. The Comet-120M, which is to be built in Rybinsk the other day, refers to hydrofoil ships of a new generation, which widely use the know-how that was previously used only in aircraft construction.

The head system integrator for Mistral was identified in terms of installing Russian equipment on it. This is an Agat enterprise. Important news for professionals. At Mistral, around which disputes over the appropriateness of its acquisition do not cease, both French and Russian control systems will be installed. The USA categorically forbade France to transfer certain information technologies to Russia, which are especially dear to NATO. Our specialists have to solve the difficult task of adapting completely different systems to each other. According to the general director and general designer of the Morinformsistema-Agat corporation, Georgy Antsev, it will be resolved on time and with high quality. You can believe it, since the information support systems for domestic warships are among the best in the world, which also became the discovery of IMDS-2013.

By the way, Georgy Antsev considers the purchase of Mistral not such a rash decision, since this ship will provide an opportunity to get acquainted with the technologies used in western shipbuilding - the French universal landing helicopter carrier ship will become a kind of laboratory. Moreover, and this is the most important thing, according to Antsev, Mistral motivates the actual revival of the Russian sea aviation, which is on the verge of physical extinction.

At MVMS-2013, a natural sample of the Ka-52 land-based helicopter and a model of this machine in the ship version was presented. According to representatives of the Kamov company, to make a marine version of a helicopter is not just to ensure the folding of its blades. In many respects, it is necessary to change the control and communications system, since flights over the sea and land differ greatly. It is also necessary to strengthen the corrosion protection. By the time of receipt of the first Russian "Mistral" under the name "Vladivostok", Ka-52K (ship) will be ready and tested.

On the eve of the opening of the IMDS-2013, two remarkable events took place. The frigate "Trikand" ("Bow") of the 11256 project - one of the best in the world in terms of its technical and combat characteristics - was transferred to the Indian Navy. And in the Russian Navy introduced the corvette "Boyky" project 20380 - the best in the world in its class of warships.

However, the main know-how of the 20380 project is a fully composite add-on, made in one cocoon. No one in the world has ever implemented such bold projects in shipbuilding. If we consider that the corvette is covered with a thick layer of special radio and heat absorbing paint, then it is practically not visible in the radar range and infrared surveillance systems.

The superstructure, although plastic, is not to say that it can be shot through with an ordinary bullet. In the Krylov State Research Center, various types of, one might say, armor protection based on composites, have also been developed.

The Corvette "Boyky", commanded by Captain III rank Alexei Suslov, became a real star of IMDS-2013. By the way, this unique corvette will stand at the pier of the Naval Station, where the salon took place, the whole of July - until the Navy Day. So residents of St. Petersburg and guests of the northern capital still have the opportunity to visit this beautiful ship in all respects.

The focus of the participants IMDS-2013, including foreign experts, were missile systems "Ball" and "Club-K".

Mobile coastal missile system "Ball" is designed to protect the straits and territorial waters, naval bases, coastal infrastructure - that is, everything that is in the coastal zone from a possible attack from the sea. It shoots one of the most powerful anti-ship missiles in the world - X-35. The effectiveness of the defeat of the enemy’s naval groupings and its individual ships is achieved by the fact that the X-35 has an active anti-jamming homing head on the final trajectory, and the Ball complex itself can fire single missiles and a volley. The range of destruction of naval targets is up to 260 km, and the total ammunition load of the Ball complex is 64 missiles, which makes the X-35 volley truly all-destructive.

We have told about the container rocket complex "Club-K" several times and in sufficient detail. But at MVMS-2013, a presentation of this complex, which has no analogues in the world, took place in a new look.

For the first time were presented: unmanned helicopter "Radar", which significantly increases the combat capabilities of the complex, and retractable radar all-round vision, built using phased antenna arrays. The radar is interesting because it works in the passive mode, that is, no radiation, but the radar itself sees all sea and air targets within 450 radius. The coordinates of the detected ships and aircraft are transmitted to the command post, where they are processed and issued either to the control units of anti-ship missiles or to the air defense systems covering the Club-K.

Even some domestic experts believe that our torpedo weapon historically inferior to Western. A powerful universal deep-water self-guided torpedo of the UHTT caliber 2013-mm was presented at MVMS-533. Travel speed - 50 knots, travel depth - up to 500 meters. Weight of explosives - 300 kg. The UGTS can be induced by the acoustic contour of a ship or a submarine of the enemy, or it can be carried out by telecontrol wires whose length is 25 km.

UGTS - a classic, so to speak, torpedo. But the package complex is a know-how, which has no analogues in the West yet. The “package” includes an MTT compact torpedo of 320-mm caliber and an anti-torpedo of the same caliber. MTT is designed to ensure the destruction of modern and advanced submarines in the near zone of self-defense. Can effectively hit and small ships such as corvettes. A distinctive feature is the modularity of the design, which makes it possible to quickly assemble a specific application.

The use of the "Package" on warships allows them to practically not fear attacks from submarines. Enemy submarines are detected at the maximum distance and destroyed within 20 radius of km from the ship. If the boat managed to break through and produce a volley, then anti-torpedoes, which, like air defense missiles, intercept and hit other people's torpedoes, are fired. It is worth repeating: there are no similar complexes in the world. And to remind: all modern corvettes and frigates that come into service of the Navy are carried on board the Packages, which Boiky demonstrated on MVMS-2013.

In the United States and Western Europe, in the construction of new submarines, it is not optical optical periscopes that are installed, but optical-electronic ones. Visual information is digitized and transmitted to the large screens of the command post. So, not only one commander, but also, if necessary, other specialists can see and evaluate the surface and air situation. In addition, there is automatic video recording. Such periscopes are also distinguished by the fact that they are shorter than the classical ones; they can be placed in a ruber fence outside a solid hull.

Now in Russia there are periscopes of a new generation. One of them, the Sail-98, was presented at IMDS-2013 by the CSRI Elektropribor concern. It has television and thermal imaging observation channels, a laser range finder, a gyroscopic stabilization system for the line of sight, and an antenna for receiving signals GLONASS and GPS.

On overseas marine salons like to show different propellers, often intricate shapes. It may seem that in the West, the technology of making screws is advanced, and we are lagging behind. This is not true. Powerful propeller shafts and small high-speed propellers were traditionally very well calculated and produced in the USSR. At the same time, unlike foreign firms, our screws were always miscalculated for specific ships and vessels, which increased the efficiency of their work. Not lost scientific and industrial skills in Russia. Our screws are still considered to be the best in their quality in the world. They are willingly bought by shipbuilders from different countries, but they never advertise it.

Strangely enough, but Russia is also a leader in training complexes intended both for civil navigation and port facilities, and in the interests of the Navy. Probably, not a single foreign maritime expert passed the “USK-Transas” simulators presented at the stand of the United Shipbuilding Corporation.

It is worth noting that over the twelve years of IMDS, the quality of the presentation of expositions on it has noticeably improved. The past salon was the most spectacular in terms of showing and effective in terms of organizing business work. Of all the stands, out of competition was the exposition of the Morinformsystem-Agat concern. In the open central area of ​​the exhibition, references were given by charming young girls in a stylized marine uniform. Constantly present live music - quiet, but very high quality. Such an approach in the organization of expositions is customary for automobile and aviation salons, but for the IMDS it is used for the first time. And it turned out to be winning!

But the work of the press center left much to be desired. His room was small, the Internet worked poorly, the help needed was simply not from anyone. And unlike the MAKS Aviation Salon, which will open at the end of August near Moscow, the IMDS-2013 did not produce daily printed reviews of the events of the previous day and descriptions of the most interesting exhibits. There was the only illustrated release of "Bulletin of IMMS-2013" ...

It is impossible to tell all about the VI International Naval Show. But we can confidently say: it is within the power of the domestic industry to assemble ships of any class, from light boats to aircraft carriers. And scientific and industrial corporations to saturate them with the most modern equipment and weapons. Russia is confidently reborn as a full-fledged maritime power.