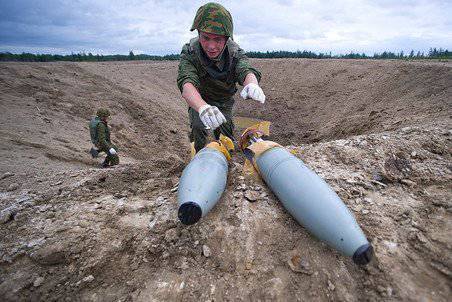 The audit of the Accounts Chamber revealed another violation related to the defense department of Oboronservis OJSC. The company was actually the only participant in multi-million tenders for the disposal of weapons and ammunition. Meanwhile, the main suspect in this case has the opportunity to walk around Moscow with a bracelet on his leg.


On Monday, the first deputy chairman of the State Duma Committee on Industry, Vladimir Gutenev, said that the Defense Ministry's subordinate organization Oboronservis, in connection with whose activities several criminal cases are being investigated, was found to have yet another violation.

According to the parliamentarian who was present at the Audit Chamber’s board following an audit of organizations involved in the implementation of the Federal Target Program Industrial Utilization of Weapons and Military Equipment for 2011 – 2015 and for the period up to 2020, Oboronservis violated the law on bidding by participating in tenders for utilization of military equipment.

It was Gutenev, who holds the post of vice-president of the Russian Engineering Union, who initiated an inspection at the end of last year.

“As the auditors found out, among the unscrupulous participants of the Federal Targeted Program are OJSC Oboronservis and its subsidiaries. Only they were allowed to closed tenders, without having the corresponding licenses. And with the direct bidding, the subsidiaries withdrew their applications for participation, giving Oboronservis the opportunity to become the only winner of the tenders, ”the Russian Engineering Union reports.

According to the audit, to which Gutenev refers, one of the contracts for the disposal of ammunition, obtained by Oboronservis, exceeded the sum of 900 million rubles. Of these, almost 100 million after the distribution of the order by eight performers, the management structure was left to itself.

The deputy chairman of the Duma security committee, Alexander Khinshtein, told the newspaper VIEW that he was inclined to believe the data voiced.

Oboronservis, other subsidiaries were actually the only and main executors of most contracts. This is connected not only with the state program of armaments, but also with other purchases. In particular, all food purchases went through the structure of Voentorg, through Slavyanka — everything related to consumer services, and through Oboronservis — everything connected with other things related to logistics, ”he recalled.

“If the goals of the investigators and control bodies are to objectively figure out everything, establish the truth and prevent similar things from happening again in the future, then they have a lot of work to do,” the parliamentarian added. “If their task is to document three or four episodes and withdraw the ex-minister Serdyukov from the case, then no.” Personally, I am inclined to think that the first option should be the only possible one. But given that Serdyukov is still in the status of a witness, and the main accused in the case of Vasilyev freely moves around Moscow with a bracelet on his leg, this raises big questions for me. ”

The deputy also expressed the opinion that the efforts of the supervisory and supervisory bodies should also be focused on the implementation of the state armament program. “For a number of years, the state actually allocated more budget funds than was required. As a result, multi-billion dollar savings were constantly being created, which did not return back to the federal budget, but was freely determined by the decision of the Minister of Defense. Where did the money go, what was acquired on them - this is a question, the answer to which, in my opinion, should be given as soon as possible, and we are talking about much more abuse than selling the property, ”he explained.

The deputy did not rule out that in the course of the work of the investigators and auditors, the public will learn new corruption schemes practiced in this organization. “This is Pandora’s box. The closer look will be, the more will be revealed, ”he concluded.

Meanwhile, on Monday, the Federal Penitentiary Service was commented on reports that the main suspect in the Oboronservis case, Evgenia Vasilyeva, was walking in the center of Moscow. Earlier in the media there were photos where, presumably, Vasilyeva is walking along Stoleshnikov Lane.

Her lawyer, Alexander Gofshtein, said that his client was entitled to three-hour walks in the fresh air, and this time she could use to move at her discretion.

The press bureau of the FPS confirmed this information. “Under the terms of the arrest Vasiliev can walk three hours a day. The bracelet tracks the time of her walks and the route of movement ", - leads RIA"News»The words of the representative office.

Recall that in 2012, 10 initiated criminal cases, later merged into a single proceeding, against officials of the Ministry of Defense who were performing managerial functions in organizations of the Oboronservis holding, including Evgenia Vasilyeva, as well as employees of commercial organizations whose actions caused damage when selling real estate and shares owned by the state.

Cases are investigated under articles on fraud, abuse and abuse of office and are combined into one proceeding. The defendants of this case are also the ex-head of the Legal Support Center "Expert" Ekaterina Smetanova (who is under a written undertaking not to leave the place) and her spouse, the former general director of the District material warehouse of the Moscow District of the Air Force, Maxim Zakutaylo (he is arrested).

Against the background of this corruption scandal of the post of the Minister of Defense, Anatoly Serdyukov was deprived, later he repeatedly came for questioning as a witness in the case.

The investigation regularly reveals all new violations. So, in May it became known about the initiation of a criminal case on the tax evasion of Oboronservis OJSC amounting to more than 320 million rubles.

Ctrl Enter
Noticed oshЫbku Highlight text and press. Ctrl + Enter
We are
On the "Zvezdochka" completed the disposal of "Golden Fish"Oboronservis overstated the cost of disposing of ammunition
Military Reviewin Yandex News
Military Reviewin Google News
31 comment
Information
Dear reader, to leave comments on the publication, you must sign in.