"Redut" will not fail 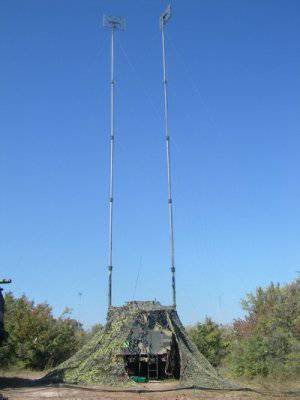 Lieutenant Colonel Oleg Tevs is a brilliant communications officer. Nevertheless, he will soon be forgiven for his position as the commander of the field communications center of the command brigade (Stavropol) of the 49 th Army Armed Forces Military District. Fortunately for the military, it will not lose superprofessional, because it is not a demotion and not a transfer to the reserve. The officer successfully passed the competition and from day to day waits for a call to the adjunct of the Military Academy of Communications.


Learn Oleg Tevs loves and knows how. It is not by chance that he graduated from the Ulyanovsk Suvorov Military School and the Military Academy of Communications with gold medals. However, the theory of the officer has never disagreed with practice. He had the opportunity to serve in serious positions. For example, at the communications center of the General Staff of the Armed Forces of the Russian Federation, in a separate communications regiment of the General Staff of the Ground Forces. He also participated in the formation of a management brigade created on the basis of the regiment. What is the cost of redeployment from the Moscow region to Stavropol and arrangement in a new place. These graduates of the Academy, who came shortly before the army, considered these events to be the main ones in his formation at the current post.

- During the service I have received a great and most important valuable practical experience. He was especially generous during his last years of service. Now I see before me the task of transforming my knowledge and skills into a scientific rationale: what, proceeding from today's realities, should the organizational and technical structure of the army and district levels of the control system be, ”admits Lieutenant Colonel Oleg Tevs to the Red Star correspondent. - Many samples of communications technology were received by the Southern Military District as one of the first in the Russian army. And our team was one of the first to test them ...

Only in the last two years, a number of modern means of communication have been supplied to the subdivisions of the brigade of the domestic defense industry complex. For example, the old park of medium-power radio stations has been completely replaced. The R-166 radio station, which is now in service with the radio, is a modern automated system that allows communication to be maintained in motion, and the active interference generated by the enemy is not terrible either. What is important, modern - does not mean supercomplex. On the contrary, in contrast to the previous models, it is much simpler to teach the P-166 to work even conscripts who do not have special training. Everything was at the heart of the radio station - the computer.

The special pride of the brigade's servicemen is the fully autonomous digital telecommunications complex Redut-2US, which allows integrating various communication systems. Simply put, "Redoubt" makes it possible to apply modern technologies and simultaneously interact with the old combat control systems. With the help of this complex, in the shortest possible time, a single powerful local network is created. "Redut-2US" includes various types of communication - from wired to radio relay - and, in fact, replaces the traditional communication node. Testing the performance of the complex and the effectiveness of its application was carried out in the course of several major tests and exercises. The servicemen of the Stavropol brigade of management took part in them. In particular, during the Kavkaz-2012 strategic command and staff exercise.

The personnel did not have the necessary practical experience of using the equipment received by them. However, all the tasks set by the command of the brigade's division were completed on time, without interruption and with high marks. Especially distinguished subordinates of Lieutenant Colonel Oleg Tevs. As a result, according to the results of 2012 of the year, they became the best communications unit of the 49-th combined-arms army of the Southern Military District. Among the honors of the combat training unit, commanded by Major Valentin Saenko, Captain Maxim Bykov, Senior Lieutenant Konstantin Bocharov, Ensign Alexander Kulikov. But the battalion commander considers not only the preparation and participation in the SKSU, but also the daily work in carrying out tasks to the destination, as the main thing in achieving professionalism. This year alone, telecom operators had the opportunity to participate in several serious combat training activities. Stavropol residents also recorded real combat work as an asset - along with other parts of the military district, they were involved in a counterterrorist operation in one of the subjects of the North Caucasus region.

- It should be noted that the rearmament of the army, conducted by the state, has a cardinal effect on the timely and accurate fulfillment of the tasks to the destination. Samples of communications and control devices that have come to replace the old park allow us to effectively solve all the tasks facing us, ”emphasizes Lieutenant Colonel Tevs. “So, for example, Redut today is the only universal telecommunications complex, massively released and delivered to the troops as part of the state defense order. And what is very important - the creators of it lay unique opportunities for further development. At the moment, no one truly represents the full potential of this technology.

For himself, Oleg Tevs decided: among other tasks that he will have to solve during his studies in the adjunct, will be including the study of further improvement of the special equipment used in the troops.

The officer is confident that he will be able to substantiate both the expediency of changing the staff structure of command and control brigades, the need to “strengthen” the communications troops by officers and specially trained contract servicemen, and the great importance of reforming the training system for junior specialists in training centers and departments, because today the importance of the control system troops came to the fore.