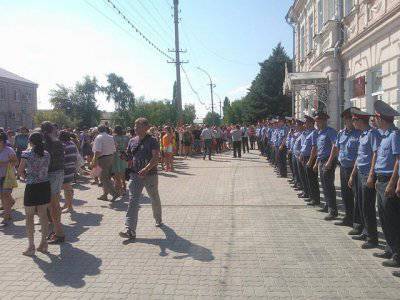 In the city of Pugachev, Saratov region, hundreds of local residents held an unauthorized rally outside the administration building. People demanded that people from the North Caucasus be evicted from the city. And this is not the first such action.


According to ITAR-TASS, on the eve of the inhabitants of Pugachev gathered for a spontaneous gathering, which almost ended in a mass brawl. It was attended by about a hundred people.

Protests in the city began after the murder of an 20-year-old local resident. On the night of July 6, a young man was stabbed in the stomach and died in intensive care. Soon, the suspect in the murder was detained: he turned out to be a minor youth 1996, born.

The incident occurred near the cafe "Golden Barrel". According to the Investigation Department of the RF IC in the Saratov region, a quarrel broke out between the victim and the accused, which turned into a fight. “As a result of the conflict, a minor with a scalpel inflicted multiple stab-cuts to the young man’s wounds of the chest. The injured died in a medical facility,” the department explained. The local media immediately clarified that the suspect was from Chechnya. According to some reports, the fight happened because of the girl.

In fact, the murders opened a case on the 1 part of the 105 article of the Criminal Code of the Russian Federation. The investigation petitioned for the arrest of the minor, and the court granted the petition. The defendant will be detained for at least two months.

According to the local MIA, on the evening of July 7, about 200 people gathered at the Pugachev Square on Cathedral - the relatives of the deceased came to clarify the relationship with the detainee's relatives. “For the purpose of protecting public order, Pugachevsky’s personnel of the Ministry of Internal Affairs of Russia were involved. The head of the Pugachevsky municipal district and the head of the Ministry of Internal Affairs of Russia, Pugachevsky, addressed the audience. After the preventive conversation, the people dispersed. There were no violations of public order or illegal actions. - informed the police. The guards added that the situation in the city is under control.

The vice-governor of the region, Denis Fadeyev, also arrived at the scene of the incident in order to understand the events. "Those responsible for what happened will be punished to the fullest extent of the law. No one will escape responsibility," he promised. Representatives of the region’s national communities also came from Saratov. At an emergency meeting in the city administration, they expressed condolences to the relatives of the deceased.

Pugachev received conflicting data. Journalist Anton Naumlyuk, who is on the scene, shares operational information in his Twitter account. According to him, on July 8 nearly a thousand people gathered near the city administration. They threw bottles into the administration building and chanted: "Evict!" Then part of the protesters gathered "to go to the pogrom of the Chechens." Participants of the street protest went to the track "Saratov-Samara". The policemen blocked the road, however, "the crowd made their way through the barbed wire and walked around the field," the first clashes with law enforcement officers began. The riot police arrived at the scene.

According to the journalist, the city authorities offered citizens to create an initiative group to somehow solve the problem. However, the locals seem to be radical. According to news agencies, the initiative group was created, and it has already held a meeting in a local house of culture.

Locals, meanwhile, continue to complain. One of them told "Russian service News":" Every year, three years in a row, people of Caucasian nationality kill young people in this cafe. They are very aggressive. People are tired of these outrages. No one is punished. "

As the head of the press service of the Saratov regional branch of the Liberal Democratic Party of Russia, Lyudmila Rossenko, said in her Twitter account, the authorities are calling on residents to disperse. But people do not disagree, some are thinking about spending the night on the street. However, according to her, they managed to free the federal highway. "The head arrived (administration - editorial note), led people off the highway, and the police blocked the approaches. The automobile communication was restored," Rossenko said.

The governor of the Saratov region Valery Radaev expressed his condolences to the relatives of the murdered young man. He also urged the inhabitants of Pugachev to remain calm. “I express my sincere condolences to the family, relatives and friends of the deceased Ruslan Marzhanov. It is terrible and bitter when the young men die in peacetime. And the fact that this tragedy caused a resonance among the population of Pugachev, from Ruslan’s compatriots, I can understand and share their pain”, - his statement is given on the official website of the government of the Saratov region.

The head of the region called on the townspeople "not to give vent to emotions and feelings." “We know the irreversible consequences of lynching, escalation of the situation, and speculation on a national theme. Historical the experience of our multinational country does not allow us to forget about this and calm down, "said Radaev.

Ctrl Enter
Noticed oshЫbku Highlight text and press. Ctrl + Enter
We are
The action “Military service under the contract is your choice!” In Rostov-on-Don: future contract servicemen, exhibitions and “Russian Knights”Lessons from the tragedy in Pugachev
Military Reviewin Yandex News
Military Reviewin Google News
429 comments
Information
Dear reader, to leave comments on the publication, you must sign in.