July 9 2013
11
A few days ago the media circulated news on signing a contract for the supply of a new warship to Kazakhstan. In accordance with the signed agreement, the Sredne-Nevsky Shipbuilding Plant (St. Petersburg) will soon build a raid minesweeper of the 10750 project and transfer it to the naval forces of Kazakhstan. The contract involves the construction of one ship and an option for the second. 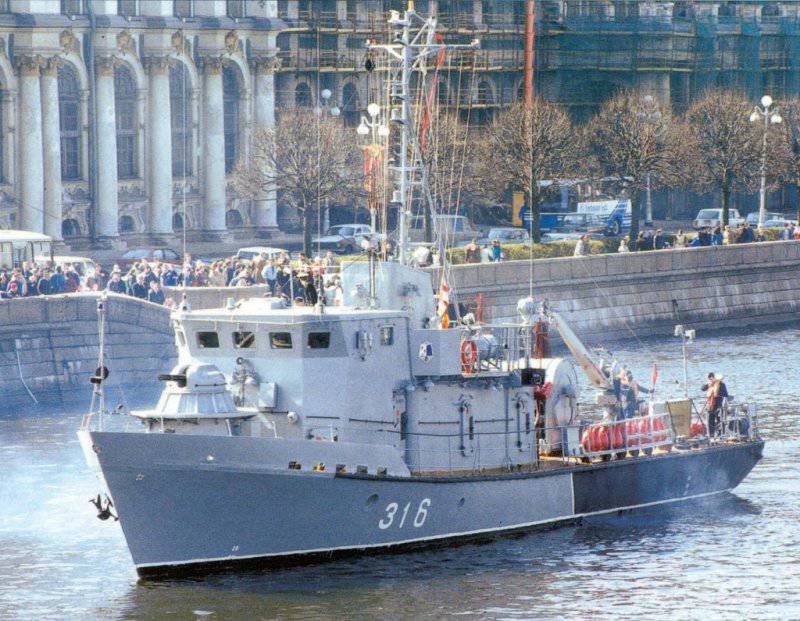 The new 10750 project is a major upgrade of the 10750 base project. From the original model, the new minesweeper primarily differs in the composition of the equipment. Deputy Director General for Military-Technical Cooperation of the Middle Nevsky Shipbuilding Plant A. Vlasov said that most of the systems and equipment of the new minesweeper will be of import origin. In accordance with the requirements of the customer, the ship will receive a power plant, a hydroacoustic complex, and a number of other European-made equipment. At the same time, the Russian minesweeper will be present in the minesweeper, albeit in smaller numbers in comparison with the basic 10750 project.

Last week, the International Naval Salon was held in St. Petersburg, during which the authors of the 10750E project - Sredne-Nevsky Shipbuilding Plant and the Central Design Bureau Almaz presented the detailed information on the prospective raid minesweeper. In addition, an advertising booklet was distributed at the exhibition, a little later published on the Center for Strategy and Technology Analysis blog. The booklet contains data that allows you to present the look of the new ship. 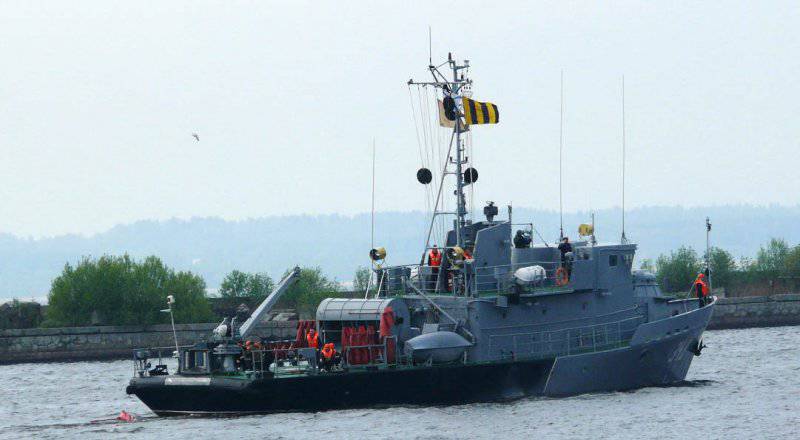 The ship of the 10750 project is small in size: the length of the hull is about 32,5 meters, the maximum width is less than 7 meters and the total displacement is about 150 tons. The stated full-speed speed in deep and quiet water is about 11 knots. The capacity of the fuel tanks will allow the ship to travel at a single filling up to 550 miles. If necessary, an increase in fuel capacity is possible, thanks to which the cruising range increases by about 100 miles. Provisions, fresh water, etc. It is designed to provide the crew of 14 people (including three officers) with everything they need for five days.

The ship hull contours are made in accordance with the requirements of ensuring high seaworthiness. So, the minesweeper of the project 10750E is able to keep the course and controllability in case of agitation up to five points. Safe navigation and control at any angles to the wind and waves are saved up to four points. The use of anti-mine systems and artillery weapons are provided at a wave of up to three points inclusive. Thanks to these characteristics, the new minesweeper is able to perform its tasks in a wide range of weather conditions.

The main power plant of the minesweeper is made according to a two-shaft scheme. As the main engines, two diesel engines MAN D2866LXE40 of German production are selected, each of which develops power up to 280 kilowatts (380 horsepower). The ship’s electrical system with an operating voltage of 380 V and a frequency of 50 Hz is based on two main diesel generators with a power of 100 kW each and one parking diesel generator twice as low. 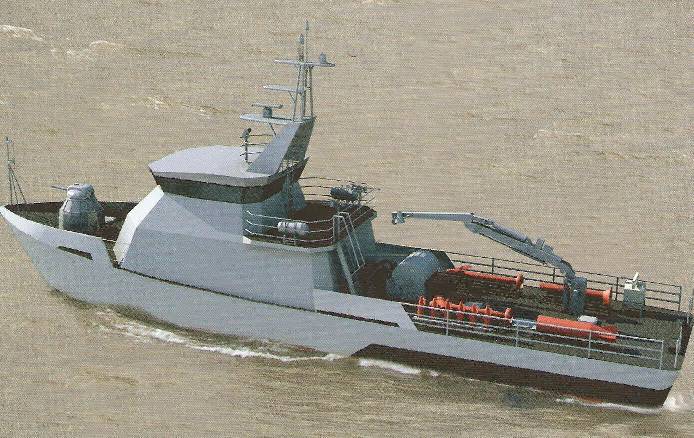 The main consumers of electricity are numerous electronic detection and communication systems. The 10750 project ship is equipped with the MP-231 navigation radar and the 6701-3 radar identification system. For navigation, the road sweeper also has the Kama-NS navigation and stabilization system, the KM-115 magnetic compass and the Aqua-Bort-12 navigation system. In addition, there are an echo sounder and a log. Detection of underwater objects, primarily mines, is supposed to be carried out using the SeaBat Combo sonar manufactured by the Danish company Teledyne-Reson. Also, the electronic equipment of the minesweeper project 10750E includes communications equipment, mainly of foreign manufacture. This is a set of Thales HF and VHF radio stations, an Inmarsat satellite communications station and a number of other equipment.

The trawl armament of the new ship incorporates both Russian and foreign equipment. This is a contact trawl model GKT-3MO-E and an acoustic trawl SHAT-U. In addition, there will be two controlled submersible vehicles of the types AUV Alister and EMDS K-STER on board the minesweeper of the 10750E project. In this case, it is alleged that, if necessary, the ship can transport and use up to ten K-STER devices. Including a container with eight sets of diving equipment will be present on the ship for handling trawling equipment. 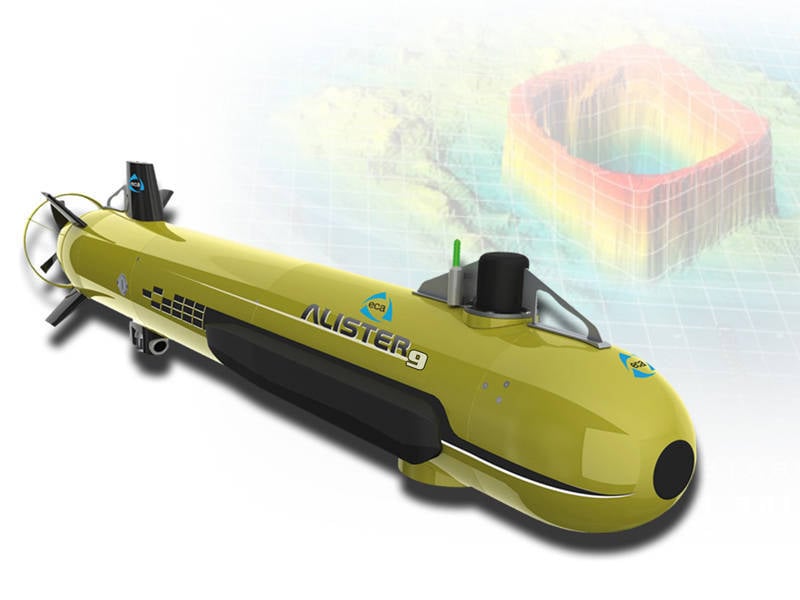 For self-defense and, if appropriate, for the destruction of mines, the minesweeper for Kazakhstan will receive one AK-306 artillery mount with a six-barreled 30-mm automatic cannon. This system will allow you to attack targets at a distance of 3,5-4 kilometers with a firing rate of about 1000 rounds per minute. Also on the ship will mount one unit with a large-caliber machine gun. In case of an air attack, the crew of the minesweeper will receive several man-portable air defense systems.

According to the Deputy General Director of the Sredne-Nevsky Shipbuilding Plant, a large number of radio-electronic equipment produced by the French company ECA Robotics will be on the new XMUM project, the minesweeper. The main reason for this choice was the legal nuances of supply: this company exports its products in a general industrial variant, which does not require the appropriate permits of the French or NATO military departments.

A. Vlasov also told how the combat work of the new minesweeper will look like. Thus, the search and detection of mines is supposed to be conducted with the help of remotely operated underwater vehicles. With their help, the ship will be able to destroy the detected enemy ammunition. At the same time, a promising trawler will retain the possibility of using traditional means of searching and trawling mines.

The first ship of the 10750 project for Kazakhstan will be built, tested and handed over to the customer by the year of 2015. Further, construction of the second minesweeper is likely to begin. However, the exact timing of the laying and delivery of the second ship has not yet been determined. Similar news will appear in the coming years.