The White House failed to restart the "old apparatchik"

July 9 2013
56
Talk of a "reset" between the United States and Russia resumed with a new force after several Latin American countries, one after another, offered the exposer Edward Snowden to obtain political asylum. One of the followers of the “reset” theme was Mr. McCain, a Republican senator from among those advocates of democracy who are called “hawks”. This senator, as we all know, does not approve of President Obama’s activities. But far less he approves of V. V. Putin’s activities. 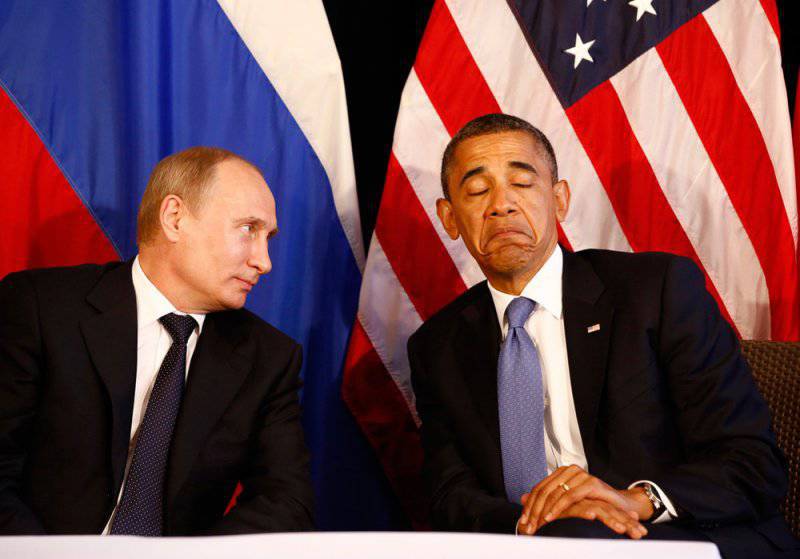 How is the channel "InoTV", about Snowden, McCain was asked on the American channel CBS in the program “Face The Nation” (July 7). The essence of the question: can the US use military force to stop the fugitive Snowden, to return or catch him leaving Russia and moving to the country where he is ready to give asylum?

“I don’t think that we can do something, there are certain norms of international law. But the lesson we learned is the following: look at our relationship with Putin. We should forget about this "reset button". It is quite clear who he really is - an old otchiktor, a KGB colonel, and he is not interested in improving relations with the United States. Otherwise, he would have taken care that Mr. Snowden be sent to us.

We should be much more realistic about Russia and Putin in order to adequately respond to their actions against us. ”

Despite the “reset”, relations between Russia and the United States continue to deteriorate, political scientists Matthew Royansky and Nicholas Gvozdev write in an article for the New York Times.

"Last year's search for scapegoats before the elections in both countries, the imposition of mutual sanctions, the ever-worsening mediated war in Syria and the potentially infinite stock of mutual accusations connected with spies and dissidents," - quotes the material "InoTV".

Similar and other "symptoms" indicate that there is a serious rift between Washington and Moscow, political analysts say. As for the “saga about Edward Snowden,” it became another crisis that struck relations between countries.

Meanwhile, playing a "central role" in many issues, "relating to security, prosperity and international influence of the United States," Russia has "even more significance than China" for Washington.

It (Russia) is important both in Europe, in the Atlantic, and in the APR, and can deal with such global problems as “climate change, emerging threats of cyber security”, etc., up to the “effect of a global pandemic of a disease” .

Everything, it turns out, can Russia, and if she holds hands with the United States, then they will not be equal.

“Imagine what the Americans and the Russians could have achieved if they hadn’t spent time putting sticks in each other’s wheels. A good example of what could be is the joint work of Russia and the United States to maintain an international presence in space, one of those areas where their cooperation continues. ”

Analysts advise Moscow and Washington to focus on the "fundamental aspects of their relationship" and solve the so-called problem of perception. After all

"... two decades after the end of the Cold War, the Russians consider the US a hypocritical power, imposing its will on others, while the Americans condescendly consider Russia to be a disreputable caricature of authoritarianism and illegitimacy."

There is little “illegitimacy”, so there are also “barriers constantly created for free communication between countries and investments”.

Between the lines is read: Russian is to blame for everything. We, they say, go to meet them, and they turn into a dark alley.

Maybe it will solve the personal friendship of the leaders? No, not her. It is generally optional.

“Putin and Obama don't need to be friends. However, they must show that relations between Russia and the United States are important, put an end to the destructive “provocation-response” cycle and take measures to maintain the foundations of joint investment, moving between countries and trade. ”

Well, and if Obama and Putin do not obey political analysts?

Then the two countries will slide into a “permanent confrontation.” And nothing will save the world. The ability to "quickly solve urgent global problems will evaporate forever."

We will not remind you that the global confrontation (bipolar world) lasted for several decades, starting with the end of the Second World War. As a result, the ability to “promptly solve urgent global problems” did not evaporate at all “forever”. Moreover, the “April theses” by Mikhail S. Gorbachev, and then his regular trips to the countries of the West, showed perfectly what could be the end of “permanent confrontation”.

Do not hint the Americans that they are ready to be friends first, starting, say, with European missile defense and friendly assistance to the fraternal peoples of Yugoslavia, Iraq and Libya, they could be five and a half percent to believe. But then, the result of geopolitical friendship is known in advance: one friend will become stronger, and the second - weaker. Everybody doubts the strength of American friendship: from the Russians and the Germans (the latter compare the NSA with the Gestapo) and ending with the Syrian Islamists. It’s time for the White House to think: why are they all not listening to our political scientists? The State Department won and “likes” on 630 thousands of dollars on Facebook bought to create the appearance of love and popularity, but it doesn’t smell like friendship.

Alexander Latsa, a French journalist who has been living in Russia since 2008, in his blog "Dissonance" describes relations between Russia and the United States as degrading.

The Syrian conflict, according to Latsy, is transformed into an indirect war between Russia and America. John Kerry made a harsh statement towards Russia, calling it the main culprit for the continuation of the conflict in Syria, and Moscow urged Washington to clarify its position, to choose between a political decision ("Geneva-2") or a decision on military support for the Syrian opposition.

As for the issue with Snowden, it serves as an additional factor of diplomatic tension.

The journalist found the third factor: Russia and China (CNPC and Rosneft) signed a 25-year oil contract for 270 billion dollars. The oil partnership with China is an additional sign that Russia is opening a “window to Asia.”

Not so long ago, Vladimir Putin also described the “reset” interference at a meeting with Russia Today employees. This was told by Kira Latukhina ("Russian newspaper").

After examining the new studio complex "RT", Comrade Putin talked with the TV channel staff on geopolitical topics. The conversation focused mainly around the United States. The contradictions between the countries are cultural, noted V. Putin. Russian consciousness is based on collectivism, the American - on individualism. “Understanding each other is quite difficult, but possible,” the president noted. And then highlighted some milestones of the historical path of the Americans.

“The development of the American continent began with large-scale ethnic cleansing, which had no equal in stories of humanity, ”the head of the Russian state noted, focusing on the destruction of the indigenous population and slavery. Then he recalled the use of the atomic bomb against Japan by the States.

However, it is necessary to understand each other, there is no other choice, Comrade Putin concluded. After all, during critical periods, during the world wars, Russia and the United States united.

Then the president was asked: "Why did not the reboot take place?"

The fact is that after the collapse of the USSR, the United States began to feel like an empire, and this is an “ambush”: they cannot afford to show weakness, the president explained. It will take time for the White House to understand that "it is more profitable to negotiate and seek compromises than to impose your point of view on everyone."

Of course, the conversation turned to Snowden. Control over citizens (to combat terrorism) should be within the law, as in Russia - wiretapping with court approval, the president explained.

Then Vladimir Putin defended the Iranian nuclear program, stating that he believes in its peaceful nature.

Speaking about Syria, the head of the Russian state stressed that Moscow is not Assad’s lawyer and does not intend to interfere in the conflict of Islamic trends. Russia is worried about what is happening in general: “The entire region has plunged at least into a state of uncertainty and conflict. And Syria there too. " And all because “some people think that if this entire region is combed under that comb that someone likes, which someone calls democracy, then there will be peace and order”. All to drive out and plunge the country into chaos is not an option, the president believes.

Finally, the attitude to the opposition is another moment where, seemingly strange, the United States and Russia diverge.

The head of state said: "Any opposition is good, useful and correct if it operates within the law." In other cases, the authorities are obliged, in the interests of the majority, to bring everyone into the legislative field.

“This is in both the States and ours,” the president said. - True, we are criticized for it, and when it happens in the States, it is considered the norm. These are double standards. ”

“Our diplomatic service does not cooperate with Occupy Wall Street,” he said.

So, the individualistic traditions of American culture created almost insurmountable barriers to the understanding of Russian collectivism (also, incidentally, quite shaken from Soviet times - influenced by the same United States and M. Gorbachev’s friendly policies). And if the White House is broadcasting a “reset”, then it becomes clear: he does not want to restart the relationship and not himself, his beloved, but ... Russia.

This is the individualistic approach in geopolitics. And it is not necessarily Russia that “reboots”: the same foreign policy principle, in other cases in a more explicit format, applies to Syria, Iran, China, Venezuela, etc.

Observed and commented on Oleg Chuvakin
- especially for topwar.ru
Ctrl Enter
Noticed oshЫbku Highlight text and press. Ctrl + Enter
We are
Asylum for Snowden - slap in the face of the White HouseResults of the week. "I remember here, but I do not remember here!"
56 comments
Information
Dear reader, to leave comments on the publication, you must to register.