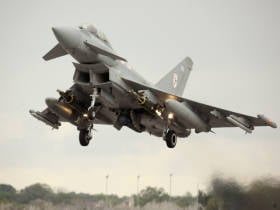 
During the tests, the capabilities of the Typhoon fighter were demonstrated to use the Payway IV high-precision guided aerial bombs (UAB) with minimal collateral damage, integrated into the aircraft's weapons control system as part of the first stage of modernization. Now the Typhoon aircraft can carry up to 6 PAW IVs, and foreign customers can expand their arsenals aviation weapons used from aircraft of this type.

Within the framework of the first stage of modernization, the Typhoon’s weapons control system integrated not only Paveway IV, but also the EGBU-16 bombs, as well as the suspended laser designator, which is used on the second series aircraft.

All these improvements, as military experts believe, will strengthen the Typhoon’s position on the world arms market in general, and its aviation segment, in particular.

Ctrl Enter
Noticed oshЫbku Highlight text and press. Ctrl + Enter
We are
BAE Systems Launches 3D Virtual Ship Simulation Technology for Royal NavyThe 20 rating of the largest arms deals, decisions on which were made in 2012
51 comment
Information
Dear reader, to leave comments on the publication, you must to register.