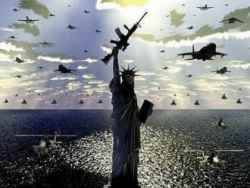 Liberalism, from my point of view, is a great utopia. As a system, it never existed anywhere and could not exist in principle. Outside of society, man does not exist. Society is always imposes certain limiters. The beginning of society is the introduction of the first taboos. Historically, the ban on incest as an act of introducing the first taboo creates a society. Liberalism proclaims another program, the exact opposite - de-taboisation.


Freedom always has a subjunctive mood. She suggests a question - freedom from what? Freedom in relation to what? In itself, freedom outside the context of these issues is absurd. Freedom, taken as a pure idea, as it was brilliantly shown in A. The Rebellious Man A. Camus leads to the suicide of humanity.

Liberalism historically developed as an ideology of removing social clips - religion, state, people, in the long term - the family. Mother and father are the same restraints in relation to the freedom of the individual as the state.

Liberalism carries the idea of ​​denial. There is no positive program in it. This is an idea that puts a minus. Historically, liberalism could exist only mixing with other ideologies. There are political options for mixing it with both socialism and conservatism. The genesis of liberalism was to divorce it with other positive ideologies. Initially there was a divorce with national teachings, then with social ones. Today we are witnessing a divorce of liberalism with democracy, which is classically understood as democracy by the people.

So liberalism has never existed as a pure model. But why then was this liberal cover necessary?

Liberalism has always existed in a paradoxical combination. Freedom of some implied lack of freedom and exploitation of others. Outside this dichotomy, we do not find liberal practice anywhere. The collision of a minority with a majority constituted the social paradigm of the assertion of the liberal concept.

Short historical an excursion confirms this thesis empirically. Ancient world: Greeks put forward the idea of ​​freedom. But it is in the Hellenic world that slavery flourishes. The slave, as you know, was not considered a person by the Hellenes. According to Aristotle, this is a living tool, a beast of burden. Freedom, therefore, was not meant for everyone. In any case, it did not apply to slaves.

In the Middle Ages, slavery does not disappear. The most prosperous, free trading posts of Genoa and Venetian were the leading centers of slavery and slave trade. Venetian slaves were trafficked throughout the Mediterranean. How did it fit together - urban freedoms and slave trade? The concept of man again did not apply to all. Not being a citizen of Venice, the slave was not a man.

New time is characterized by the development of the idea of ​​political freedoms. But at the same time, a system of world colonialism is emerging. In total, over the period of colonial expansion, more than 80 millions of slaves were exported from Africa. It is significant that many theorists of liberalism were among the slave-owners. The owners of slave-owning plantations were, in particular, the founding fathers of the United States - Presidents Washington, Jefferson, Madison. The value of freedom was surprisingly combined in their presentation with the commonness of lack of freedom. The concept of "person" was still selective. The same reason had the paradox of the Russian feudal liberals.

Only in the XIX century. a ban is imposed in Europe, and later in the USA on slavery. But it was at this time in the process of the formation of the colonial system that the colonialists learned to use the mechanisms of exploitation through indirect coercion. Direct physical slavery is replaced by economic slavery. The freedom of some - the owners of the resources is still combined with the lack of freedom of others, which are now formally free.

In the light of the above, the nature of the combination of the liberal get-together of the 1990s becomes clear. with a sharp social degradation of the majority of the Russian population. This, in fact, was the meaning of the implementation of the liberal concept - the robbery of the majority ("cattle") in favor of a group of free individuals. The freedom of this group of new owners of life was built on the lack of freedom of the rest of the population. Otherwise, with a consistent movement on the liberal patterns and could not be.

I summarize: today liberalism is a variant of neocolonialism, it is a mechanism of non-force economic slavery. Fascism and liberalism are related phenomena. They reflect two historically manifested variants of Western expansion in the world. At one time, it was condemned one of these options - fascism. It is time to raise the question of liberalism, as a phenomenon related to the fascist ideology.

Ctrl Enter
Noticed oshЫbku Highlight text and press. Ctrl + Enter
We are
The world we leave, the world we enter, and the world between themAbout Stalin and Khrushchev
Military Reviewin Yandex News
Military Reviewin Google News
98 comments
Information
Dear reader, to leave comments on the publication, you must to register.