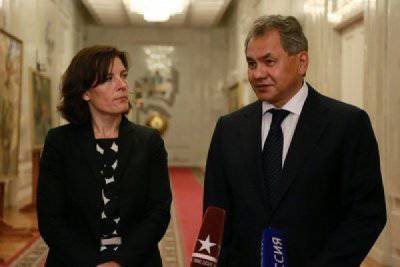 Defense Minister General of the Army Sergei Shoigu held talks with Sweden’s colleague Karin Enström, who arrived at Moscow on a two-day visit at the head of the military delegation. During the conversation, the heads of the military departments discussed a wide range of issues - from the perspectives of regional cooperation in the Baltic to the situation in Egypt and Syria.


Welcoming his colleague in the building of the Ministry of Defense of the Russian Federation, the head of the Russian military department noted that there are many issues that are of mutual interest to Russia and Sweden. In matters of bilateral regional cooperation, Sergei Shoigu spoke in favor of building closer contacts in the Baltic.

Looking ahead, we note that following the results of the negotiations, preliminary agreements were reached on holding a joint exercise and rescue training in the Baltic Sea in 2014 in the Baltic Sea in the framework of the relevant Russian-Swedish agreement. “We agreed to expand the scope of joint activities, of which we have quite a lot today,” General of the Army Sergei Shoigu said after the meeting, noting that “there is a reserve” for further development of cooperation.

During the talks, the parties could not but touch upon the events that are currently developing rapidly in the Arab East. Describing the current situation in Egypt, the head of the Russian military department expressed hope for an early normalization of the political situation in this republic. Regarding Syria, Sergei Shoigu noted that the events taking place on its territory cannot be called a civil war. “It is rather a struggle against those forces that somehow wander between different kinds of conflicts,” the RF Minister of Defense specified.

The parties also discussed the situation in Afghanistan in connection with the upcoming withdrawal of the International Security Assistance Force from there in 2014. The Russian minister, in particular, stressed the need to maintain stability in this Islamic republic and in the region as a whole "at least at the level that exists today."

Summing up the negotiations with the Minister of Defense of Sweden, the head of the Russian defense ministry expressed confidence that as a result of the meeting and the implementation of the plan that exists between the defense ministries of Russia and Sweden, bilateral cooperation can be continued at a new level. “Today’s meeting should become an additional stimulus for further, more dynamic development of relations in both military and military-technical cooperation between our countries,” concluded Army General Sergei Shoigu.

For her part, Swedish Defense Minister Karin Enström thanked Sergei Shoigu for the constructive meeting. Sweden has a “wonderful relationship” with Russia, according to her. “I hope that we will be able to continue an effective, fruitful dialogue on a number of topics that are of mutual interest,” Ms. Enström told reporters. Based on the results of the negotiations, the Swedish side is counting on the further development of cooperation with Russia in responding to crisis situations, as well as in the military sphere. Also, according to the minister, there was an exchange of experience in reforming the armed forces, which is going on in parallel in two countries.

As the head of the Swedish defense department noted, against the background of events occurring in the world, challenges and threats, flexible and effective defense is needed. “This background encourages us to more productive cooperation,” said Karin Enström. In this regard, the head of the Swedish Ministry of Defense expressed gratitude to the Russian minister for the international conference on European security held in Moscow in May and invited, in turn, Sergei Shoigu to visit her country at any convenient time.