Ukrainian fleet: it is easier to invent a past than to take care of the present 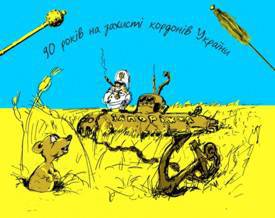 Ukrainian nationalists are largely disadvantaged people. Absolute majority historical The dates in their version of the story are tragic and only good for complaints. Therefore, they, Ukrainian nationalists, make every effort to search for dates and events that, at least at a stretch, can be regarded as solemn. And as a result, they create constructions completely unthinkable in their meaninglessness. Some Konotop skirmish will be called a battle. That is the day of the Ukrainian Black Sea fleet start celebrating ...

Usually, the Ukrainian nationalists are trying to celebrate it just today, on the fourteenth of January. The fact is that on this day in 1918, the Central Rada approved the Interim Law on the fleet of the Ukrainian People's Republic. Nothing, nothing to immediately begin to giggle - they had a fleet, even with a flag and a coat of arms. True, at the time of the approval of the law, there was no longer ... Just starting from the end of the seventeenth year, before the October Revolution, the Central Rada began to "Ukrainize" the ships of the Black Sea Fleet. This was done in agreement with the Provisional Government, without removing the units from the Russian army: “Ukrainian” teams were assembled on ships by collecting sailors-Ukrainians from different ships. Exchange of sailors - and gradually accumulated several crews of conditional Ukrainians.

And then by the way - as they thought at first - the October Revolution occurred. It was possible to ignore the Provisional Government, and on October 12, 12 for the Black Sea Fleet was ordered to raise blue and yellow flags everywhere by one day. To which the Central Council immediately received a reminder that, in spite of the untimely Ambetz of the Provisional Government, the fleet is still held with money from the Russian Republican treasury. Therefore, there is nothing to provoke the sailors to separatism, gentlemen Kiev rogues. And the sailors are not really provoked. The order was executed through the stump-deck, the crews were terribly unhappy. Even on “ethnically clean” - from the point of view of the Central Council - the ships almost did not raise flags. Or raised, but at all an incredible blindness - several different flags at the same time. In November of the same year, the crew of the St. George the Victorious seemed to recognize the Central Council - but did not raise the flag. In the same November, the Ukrainian flag of the cruiser “Memory of Mercury” raised the flag - but at that there were two hundred sailors who did not want to be called “Ukrainians” and almost all the officers left the cruiser, taking the battle flag of St. Andrew with them. In general, this is how the fleet turned out - from the “Memory of Mercury”, from the battleship Volya built in Nikolaev and, allegedly, from three destroyers, which, according to Kiev, were also “Ukrainized”. Like it or not, the Central Rada fleet existed for two months. Red riots began on all the ships, and the sailors themselves betrayed the blue-yellow panels ... well, let's say, to oblivion. For some reason, Ukrainian nationalists do not recall this. They love only the classic myth of raising the blue-yellow flag by the sailors of the Black Sea Fleet - and then, perhaps, there was no flag that didn’t even take one Black Sea ship for at least one day. And what do you want - coups in the country one by one. As far as the Central Rada had enough “special rations”, so many sailors turned into “Ukrainians”.

I wonder why, at the same time, the guardians of the fatherland do not like to remember what kind of fleet they got during the collapse of the USSR? Because it is very embarrassing to recall this, looking at the submarine rushed to the pier. Because then you will have to remember about the miserable situation of those few sailors who today have not yet escaped to the Russian Black Sea Fleet, simply because it is not so easy to escape there. Much nicer to build absurd designs of the heroic national past. Maybe a ride - for inattentive people.